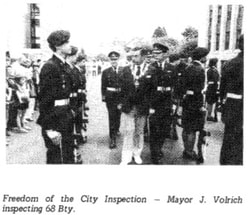 15th Field Artillery Regiment, RCA
If any year in a Regiment’s history can be considered as one of the regiment’s most productive, then the past year must be regarded as such. It must also be considered as one of busiest. Training was conducted in Vancouver as well as CFB Chilliwack and the United States Army ranges at Fort Lewis and Yakima, Washington. There were times when it seemed that the unit was either getting prepared for one exercise as a previous one was winding down. In support of training the Regiment’s vehicles travelled 77,800 miles.
During the year personnel of the Regiment left for duty with regular units in Canada, West Germany, as well as service in the Middle East.
Thanks to the impetus given recruiting by the Olympics, and local courses run in the summer, the Regiment was able to provide a completely formed Battery. The band has also reached a status of Artillery training that enables it to field a gun detachment when it is needed.
Within Militia Area Pacific the Regiment started the practice of camouflage painting trucks. We managed to keep it quiet until all the vehicles were done. Once it was known other area armouries sprouted paint shops as other units became determined not to be shown up at summer camp.
The Officers’ Mess celebrated St. Barbara’s Day in grand style with one of the largest turnouts in recent years. Once again our steward did an outstanding job. The celebration ran long into the night and by 0400 the last members and guests were leaving for home.
On 17 December the Annual Christmas Dinner was served to all ranks. Since the cooking facilities at the Armoury is limited the birds were cooked at various homes. There is no sight more bewildering to a new recruit than to see various senior officers trying to manoeuvre turkeys, drippings and their carving sets through the front door of the armoury. The dinner coupled with a CO’s inspection and a pay parade was an outstanding success. Once the dinner was cleared away the afternoon was given over to the Children’s Christmas Party.
When the late Col Blair put up a trophy for the top rifle team in Pacific Area, so many years ago, he had little idea what he would start. The trophy is now the most sought after trophy in Militia Area Pacific. On the first weekend in June a veritable horde of shooters descends on CFB Chilliwack, and its rifle range. Every year one Vancouver based unit is tasked to provide administrative support for the shoot. Last year it was the turn of 15 Fd Regt RCA. The task to build a tent city for 300 personnel, allocate family areas ( for families come and make a weekend of the shoot) provide the necessary personnel to run the range and take it all down when the competition ends.
To conduct the shoot requires continual liaison with Area HQ and the other units, not to mention CFB Chilliwack. MWO Rossi of our RSS Staff was almost constantly on the telephone with CFB Chilliwack. On Thursday he took the advance party to Chilliwack, put up all the canvas, and struck it all on Sunday. In spite of the manpower demands for the administrative support, the regiment managed to field two rifle teams.
In the usually beautiful late spring weather, the range at Chilliwack is an incredible sight. A 600 foot ridge serves as a massive backstop. Snow covered mountains border the range. The intensity of the competition blots out the beauty and when the smoke and the agony of waiting were over, the teams had shot their way to 7th and 15th place. In addition, the unit placed the top shot in the 200 yard rapid fire.
On June 12, 1977 the ceremonial highlight of the year took place. The Regiment paraded at City Hall where the Mayor of Vancouver, His Worship J. Volrich, awarded the Regiment the Freedom of the City. Upon our return to the Armoury two 18th Century Cannons newly mounted outside the Armoury. The guns came from the City of London and were brought to Vancouver by a Royal Navy landing ship. The guns were cleaned and prepared by CFB Chilliwack, where the mounts were also manufactured.
Area Headquarters continues to run a yearly series of Tactical Exercises Without Troops (TEWTS), however, this year a major CP training exercise was carried out on a round-the-clock basis. It is intended that the training will be extended to include more complex CP exercises. 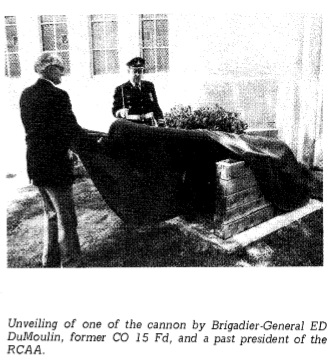 ​If any group within the Regiment had an outstanding year it must be the Regimental Band. The musicians, under the direction of Capt Peter Erwin, practice every Wednesday evening. However, that has not hindered them from starting the training year with one success and finishing with an even greater success. The fall session saw the completion of the band’s first record. Sales have been brisk and steady. The band’s next coup took place on 11 June in the newly refurbished Orpheum Theatre; joined by the Pipes and Drums of the Seaforth Highlanders of Canada and a Legion Colour Party. A gala performance took place to celebrate the Silver Jubilee of Her Majesty Queen Elizabeth. The Lieutenant-Governor and almost 3,000 packed the theatre for the performance.
During the summer, when most of the Regiment was away on courses or vacations, it was once again the band that was the most visible portion of the Regiment. Chancellor Helmut Schmidt of West Germany arrived in Vancouver and the band played for both ceremonial and social functions involving both the Chancellor and Prime Minister Trudeau. Once again the band played at CFB Chilliwack for both Armistice Day and other functions. Copies of the record are available from the Regiment for $6.00 each.
This year the Regiment welcomed into its ranks Capt Paul Roberts, late of 3 RCHA and Capt J. Jessop, late of 2nd Field Regiment. Capt Art Gee is still on the staff of HQ Militia Area Pacific where he was joined by Capt Bill Laschuk. The Regiment is currently commanded by LCol WT Wickett. Major ST McDonald as DCO, while Majors VWB Hamilton and RE Mugford command the 31st and 68th Field Btys. Capt MA Casey occupies the Adjutant’s office while Capt DB Harrison commands the RSS Detachment.
If an artillery regiment’s training can be gauged by its shooting, then this year saw us spend more time on the ranges than any year in our history. During the year we spent four weekends and two weeks on the ranges. Most of the firing takes place over long weekends or the Easter break. Following our now annual Thanksgiving pilgrimage to Fort Lewis we did not fire until 25-27 February. This short one day’s shooting was only a quick introduction to the events of 25 March-03 April.
In order to gain the maximum training advantage of the school break the unit spent back-to-back weekends on the range. During the intervening week courses were conducted at Fort Lewis for both recruits and artillerymen. Those that had to return to work were bussed home and back again a week later.
To provide a further break with training routine, a novel plan was prepared and only unveiled at the last minute. At the Armory on Friday the BC gave his orders. When Maj McDonald informed the O group that rather than going to quarters and deploy the next morning, the Bty would stage through Fort Lewis, pick up the advance party, and move straight to the field. The stunned look of the O gp was one of those scenes which gives truth to the saying, ‘One picture is worth a thousand words’. Or ‘My gun tractor is loaded with 40 kit bags’, quickly ran through people’s minds. However, the Bty quickly adjusted, and after a short stop in Fort Lewis, the deployment commenced. On subsequent deployments the band has been allocated its own truck. Although the idea has yet to be repeated, there are a number of personnel expecting it to happen, and as a result, closer attention is paid to vehicle loading.
The Orpheum concert was hardly over, the last dress uniform packed away, when once again regimental convoys were on the roads over the Cascade Mountains bound for Yakima, Washington. From 23 June until 3 July the sand, sagebrush and rattlesnakes were subject to a constant pounding as the guns of both the 15th Field regiment and the 5th (BC) field Battery conducted the artillery portion of the Annual Militia Concentration. During this week the Regiment conducted the annual sniping gun competition. When the shooting was completed Sgt Jackson JM and his detachment were the new possessors of the RSS Trophy.
The Canadian Gunner, Volume 13, December 1977, page 121
Back to 1977
Copyright © 2015, 2016, 2017, 2018, 2019
Webmaster/editor - Leon Jensen, OMM, CD, Commanding Officer 1998-2001, Regimental Sergeant Major 1986-1988
Additional photos and stories as well as comments regarding errors and omissions would be greatly appreciated. ​
​Have I inadvertently placed personal information of yours on line that you don't approve of?
​Please accept my apologies and contact me at president.vcrgunners@gmail.com and I’ll have it removed.