Illustration from Canada in Khaki
France
Nov. 1st 1917
My Dear Leila,
I was more than pleased to receive your letter yesterday, along with note from Jack, with all the news of the wedding. Also had letters from Mamma and Ina, and by the accounts everything in the eventful day must have gone off in the" Superlative Superlative". You didn't mention if the wonderful 'hubby' was nervous. Isn't it too bad that I can't even get a piece of the cake in this uncivilized part of the world? Who were the Best Man and Bridesmaids?
Did I ever tell you what I did on that day, Sept. 4th? Walked 22 miles and then went on guard duty. I must have been on my first beat while you were being married.
The house must be very prettily fixed and nicely arranged and hope someday ( notice I didn't say soon, I'm not hoping for impossibilities) to give the house a personal check over. The letters have been pouring in this week. 4 from Mamma, 1 from Ina and 1 from you, not bad at all.
Also a letter and parcel of candy from Mrs. Waith. Also heard from Poppy Burnett. Were Nellie and Gordon at the wedding? Have never heard a word from her since I left Sherbrooke. I think Gordon is sore on me for rushing too strong at the end and can't blame him now that I have come to the years of discretion.
You asked me about a certain little girl in Godalming. "Who is she?" A school teacher, very clever girl of 18 years. "Name?" Alice Knight. "What's she like?" The prettiest girl in Godalming, a sturdy girl, just about your build. "Her people?" I have only met her sister, who married a Canadian Artilleryman of the 4th Contingent ( we are 5th). Her three brothers are all over here. "Introduced?" We were never. There is no introducing done at any of those dances in Whitley, as it is practically impossible. None of the fellows know any of the girls. I spotted her the moment she made her appearance on the floor and lost no time in getting a dance. "Business?" Don't know her well enough' but will say she passes the 1st tests. Now there you have her in detail, and am really going to send you her picture so that you see I am not kidding you.
Have been working at a new job this week and sometimes within 1,000 yards of the German front lines. Of course on such occasions one has to keep very close to the ground. There have been no other casualties in the Battery except 2 accidents, one broken arm and one broken leg, both made "Blighty" in them.
(Never say, out here, that you are going to England or London, always "Blighty"). If a fellow gets wounded, the doctor will say," It's a Blighty case or if it's not too bad , a Base Case and if he has lost both arms and both legs, and both eyes shot out, one ear off and part of his nose, he might get "a Canada".
At present we are having beautiful weather which means that the air is fairly alive with planes, We see some awfully exciting air fights.
Am glad that you like , "Canada in Khaki". It is very good. I haven't much time for reading now, but am very fond of it when I get on a job that's "Bon".
Well, I think this is about all my news for the present so will say goodbye. Lots of love for Mamma and all.
From your affectionate brother,
Bertie 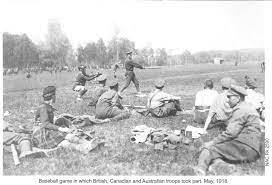 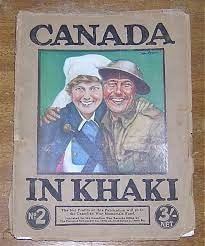 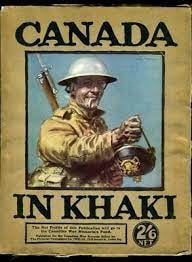 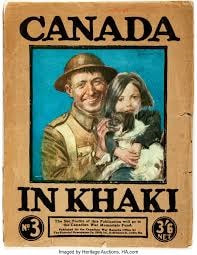 Back to Bombardier Cox page
Header Photo - Illustration from Canada in Khaki
Copyright © 2015, 2016, 2017, 2018, 2019, 2020, 2021
Webmaster/editor - Leon Jensen, OMM, CD, Commanding Officer 1998-2001, Regimental Sergeant Major 1986-1988
Additional photos and stories as well as comments regarding errors and omissions would be greatly appreciated. ​
​Have I inadvertently placed personal information of yours on line that you don't approve of?
​Please accept my apologies and contact me at president.vcrgunners@gmail.com and I’ll have it removed.