My Dear Leila,
Today I am celebrating my 2nd Birthday in the Army by going on guard duty tonight. Last year , I hoped that I would never have another year in the army, but being a little more enlightened on the subject, my wish, today, is to be alive on March 25th 1921. and then I'll make another wish in accordance with what is going on then.
We have had fine weather for the past couple of weeks, in fact it has been awfully hot, although the nights are always cold.
I suppose you see in the papers what we're doing with the Hun's aeroplanes, they are certainly making short work of them in the air.
The Division has been back to the rear for a few days rest, but we are again in action. We played football and baseball etc. and on the whole had a pretty good time. I had a really comfortable feather bed to sleep in.
Old Bill Baillie is as big as ever and all the boys are well
I started this letter in a new YMCA that has recently been opened near our own wagon lines, which we were lucky enough to get back, on our return from rest. Am now writing on a bag of oats in the feed room.
Many thanks for your letter of February 4th…. and you say you think you know somebody like my girl? I don't think you ever saw a face like that before!! Have they posted it back yet? I hope so.
I imagine Beryl must make an awfully sturdy girl and is she still so dark? Kathleen Hutchinson sent me her picture. Good Heavens, she's as fat as a tub. Also had a picture and letter from Gladys Skinner, she's looking well, and seems to be all gone on Harold Bascombe. I know Gladys pretty well, you know, and he's getting a bit better deal than Mamma thinks ( she's not very strong for A.)
I had a nice long letter from a girl that I worked with at Portage Ave. Fancy, there are 6 girls in that office now and only 2 men to look after them. She has left the bank; says it's not like the good old days when we had tall tellers!! Her fiancé, a major, was killed at Vimy Ridge last year.
The guns are certainly doing some tall barking tonight, but thank goodness I won't hear that dismal yell in the middle of the night, "Stand To" ( pronounced too ) as I have at the wagon lines.
It's now 7:45 PM and I am writing by daylight but it is getting dark so will quit.
Give Mamma and all the news, and write soon again. Lots of Love for Jack and self. From your affectionate brother,
Bertie 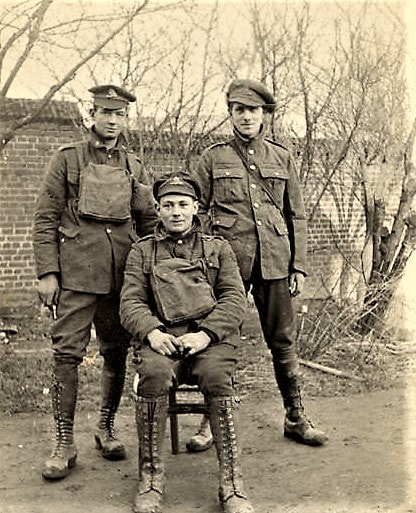 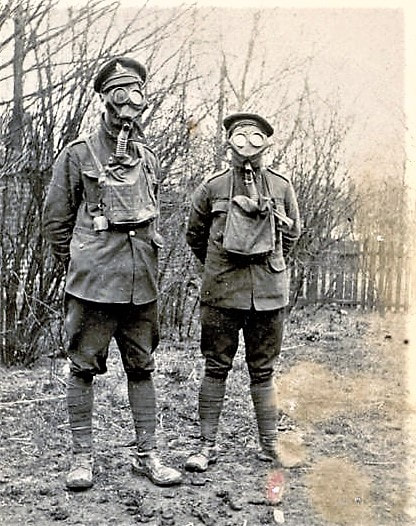 Back to Bombardier Cox page
Header Photo - Group of Artillerymen, Driver Calder collection
Copyright © 2015, 2016, 2017, 2018, 2019, 2020, 2021
Webmaster/editor - Leon Jensen, OMM, CD, Commanding Officer 1998-2001, Regimental Sergeant Major 1986-1988
Additional photos and stories as well as comments regarding errors and omissions would be greatly appreciated. ​
​Have I inadvertently placed personal information of yours on line that you don't approve of?
​Please accept my apologies and contact me at president.vcrgunners@gmail.com and I’ll have it removed.