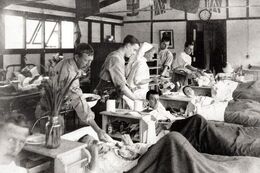 France
July 1, 1918
My Dear Leila,
I can't remember whether this is a holiday in Barbdoes - Dominion Day. A year ago today we were fighting the big battle of "Petworth" ( the day, you remember, I went to Arundel Castle and Worthing).
Today it's a very different scene. I'm in a tent at the horse lines, with about 50 other fellows of the Battery, all laid up with the Spanish Fever. It's very much like influenza and seems to be going all through the troops. 50 % of the French and German armies are in the same state. It's all over England, too. Several schools were closed last week. Unfortunately, it only lasts a few days, so one can't make Blighty on it.
July 4th…this has been declared a holiday throughout France, in honour of America, so we'll probably get the 1/2 day. I'm Battery runner, today, and have just got back from a trip to the guns. Left here at 8:45 AM and was back at 10:45 am, on horseback, you know. It's very quiet, up the line, today. There was nothing dropping near the Battery.
I am feeling quite fit again, and most of the boys are getting better. I was talking to Bill Baillie, Hewit, Mc Callum and Alex Mc Kennan at the guns this morning. They told me that my old friend, Gladys Bellman is engaged or married. She knew all the 'Commerce' boys.
Thank Ina for her letter of May 31st, received on June 26th. About the fastest one yet. Also many thanks for Jack's and yours received when I was at the guns. I often hear one of the boys say "does your sister say anything more about the SOLDIERS, now?"
I wish I could lecture you for about an hour on modern warfare, as I know you don't quite understand much about it. What you think it is and what it really is, is as different as the North from the South. But I'll tell you about it some day and the pleasure will be all mine.
It must be very nice to have a piano in your home, some class, eh? I suppose 5 or 6 years from now, the kids will be tearing everything to pieces. Don't forget, boys are needed for the next war! So you don't think that there will be enough men left to fight by March 25th, 1921 ? There are enough men, on both sides, left to carry on this war for 20 years, killing them at the same rate that there've been killed at, today. Do you know that Germany has more men right now in uniform than Great Britain?
In answer to a question : Stand To = prepare for action. Very different from Stand Down = cease firing .
Did you mean to take shelter from the enemies shells? There is no such order, It's just a natural feeling!!
We are still having nice weather. Tell Jack I'll write him soon. Lots of love for all at Ellerslie and selves from your affectionate brother,
Berti 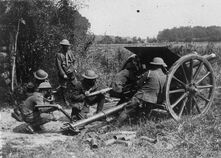 My Dear Carl,
Just finished stables yesterday when some body handed me your letter with Mabel's enclosed. I knew at once that an amusing time was in store.
I look forward to your letters more than anything with those desperate phrases and expressions and ideas of the war, which are so totally different to mine. The press is really doing it's work nobly; it has you, like everyone else properly fooled.
Blues, nothing, man…I never have the blues, nor am I a pessimist. I'm looking at it from the broad view and you are crazy if you think that Germany can't hold out on account of not having enough men, because she has more men on the Western Front, today, than the Allies have.
If it were a question of money and men this war would last for 20 years. I don't want you to imagine for a minute that I think we are going to lose in the end, because we're not; at least not until every man on this side is killed. But we can only win on points. It's not going to be a knock out, as you are persuaded it will be.
Berlin will never be ' marched through' by our soldiers, man. It's a 20th Century War, not "William the Conqueror versus Harold at Hastings."
As John Bull says " We are bound to win this war, because we've tried our damdest for 4 years to lose it".
We want a few Hindenburgs and Ludendorfs on this side to run things Our men are all right, but we fall down in our generalship. What we want are beaucoup bombing planes to bomb their cities and then armies and everything else. Then, Good Night Germany.
Say, is it very Hot in NY?…must be the heat that's effecting you. .When is the time for ripening? For Heaven's sake make it snappy , if that's the way you feel about it.
I've been down at the horse lines for 2 weeks and we change crews today. We've just had an inspection of horses, harness and vehicles this morning and I'm writing this out in an open field, on a tree stump with the wind blowing about 40 miles per, while I watch the team graze. Am playing in a cricket match today against 'the heavies' ( heavy artillery). Will then parte' tout suite to the canons tonight.
I think I've already told you that our gun No.2 is in the sniping position. We are forward of the other 5 guns by about 2,000 yards. He never shells the Battery, but just pours them around our gun. He has had 2 direct hits on it (them), but has never got a man.
Did you receive the last long epistle I wrote about 3 weeks ago? Thank Mabel ever so much for her letter and will write her next time. Do write again soon, yourself. Laughing is good for the morale of the troops, you know.
Well, must close. It's time to take the old nags in. Lots of love for Mabel, Piggott and self from your affectionate brother,
Bertie
Back to Bombardier Cox page
Header Photo - Artillery Barrage - Library and Archives Canada
Copyright © 2015, 2016, 2017, 2018, 2019, 2020, 2021
Webmaster/editor - Leon Jensen, OMM, CD, Commanding Officer 1998-2001, Regimental Sergeant Major 1986-1988
Additional photos and stories as well as comments regarding errors and omissions would be greatly appreciated. ​
​Have I inadvertently placed personal information of yours on line that you don't approve of?
​Please accept my apologies and contact me at president.vcrgunners@gmail.com and I’ll have it removed.