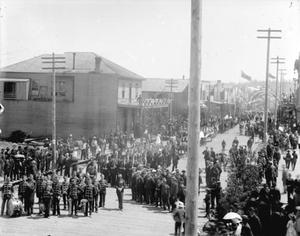 Celebrations
In the 1930's the mainland companies of the old 5th B.C.B.G.A. were remembered with nostalgia. "The boys of the old brigade" held reunions in1937, 1938 and 1940 and exchanged memories of comrades and youthful escapades. Some stories grew with retelling: a former powder-boy of the Seymour Battery, in successive accounts of his enlistment, pushed the date farther and farther back into the mists of antiquity. "Remember when the sergeant bawled us out for carrying umbrellas while wearing the Queen's uniform?" asked one ex-gunner of his fellows in 1940. In the light of the Boer War and the two world conflicts that followed, those days in the 1890's when the men of Vancouver and New Westminster paraded in gaudy uniforms and fought mock battles in which no one died seemed like the innocence of childhood.
​Vancouver Defended, Peter N Moogk, pg 30
Obituaries

Sergeant William Thomas Harrison
Services for William Thomas Harrison, aged 54,  of 829 East Twenty-second, who died on Monday in General Hospital will be held in Hamilton Funeral Chapel on Wednesday at 2 p.m. Internment will take place at the Returned Soldiers’ Plot Mountain View Cemetery.
Mr. Harrison was born in England and had lived in this city for thirty-two years. He served overseas during the Great War with the 2nd C.F.A. He is survived by his wife, two sons, two daughters, and a sister and a brother.

Gunner Edward Fulton Hewitt
Edward Fulton Hewitt, 64, of 317 West Cordova Street, died Tuesday in the General Hospital.
Mr. Hewitt was born in Toronto. During the First Great War he served as a gunner with the 1st Canadian Division He was a member of the executive of the Army and Navy Veterans, Branch No. 68. He leaves a sister; Mrs. W.H. Parrott, Oak Bay Avenue, Victoria.

Gunner John Robertson Wilson
Gunner Robertson was taken on strength as a Gunner with 85th Battery 15th (Vancouver) Coast Brigade RCA on 4 September 1939. He died from a self-inflicted gunshot wound on 15 July 1940 enroute to Yorke Island and is buried in Mountain View Cemetery. He was awarded the War Medal for his service.
See more...
Lists
The following pages contain additional information relating to the 15th Field Artillery Regiment, RCA
Honours and Awards
Trophies
Commanding Officers and Regimental Sergeants Major
Honoraries
Battery Commanders and Battery Sergeants Major
Band Appointments
Nominal Roll
Guns of the Regiment
Memorial Page
Copyright © 2015, 2016, 2017, 2018, 2019, 2020, 2021
Webmaster/editor - Leon Jensen, OMM, CD, Commanding Officer 1998-2001, Regimental Sergeant Major 1986-1988
Additional photos and stories as well as comments regarding errors and omissions would be greatly appreciated. ​
​Have I inadvertently placed personal information of yours on line that you don't approve of?
​Please accept my apologies and contact me at president.vcrgunners@gmail.com and I’ll have it removed.