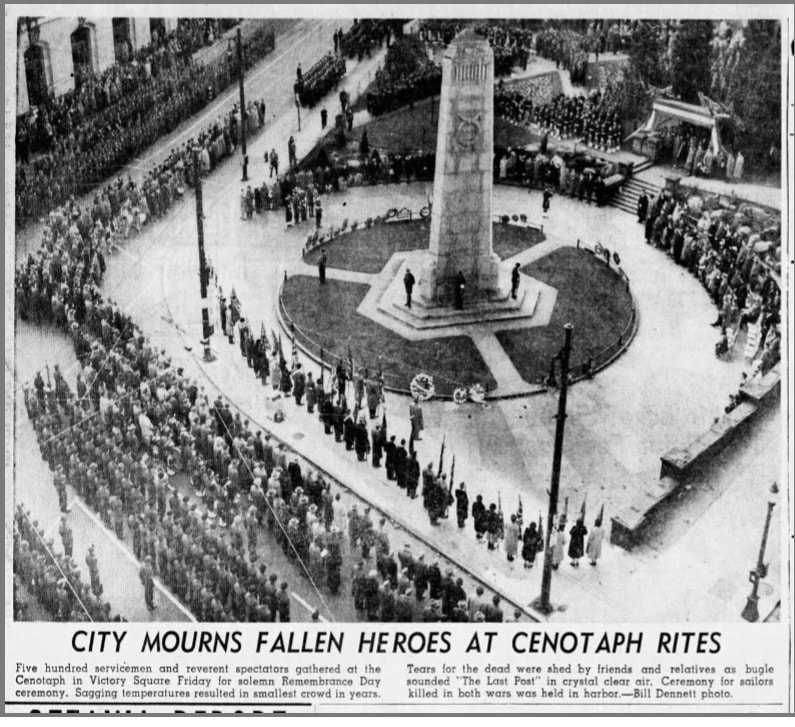 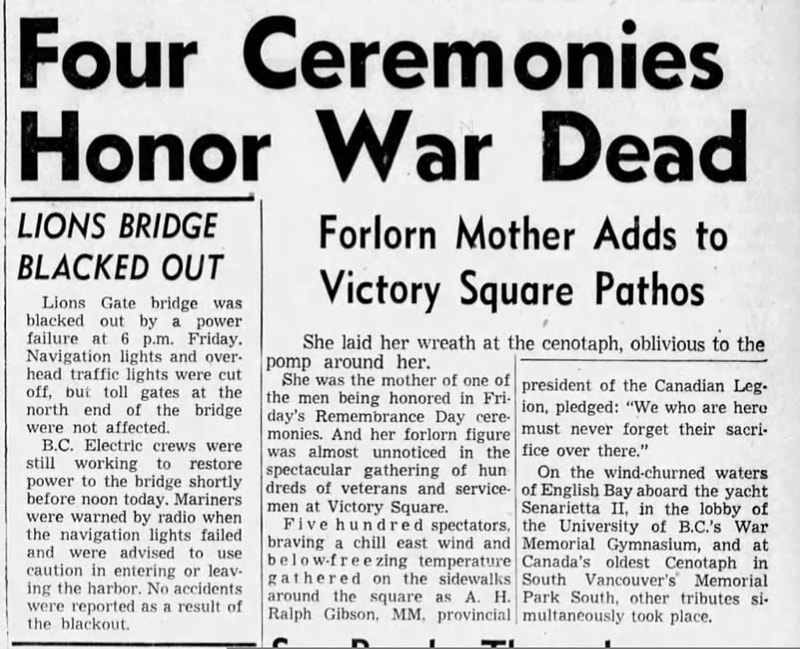 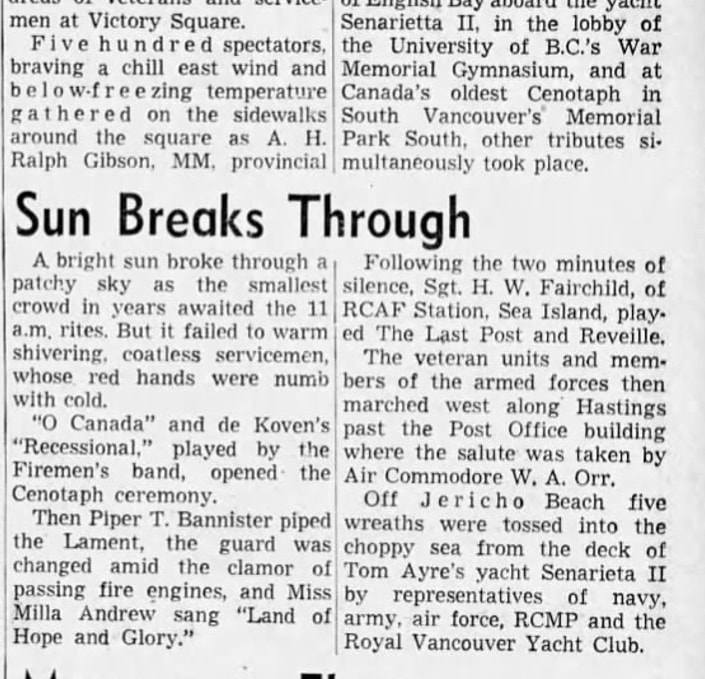 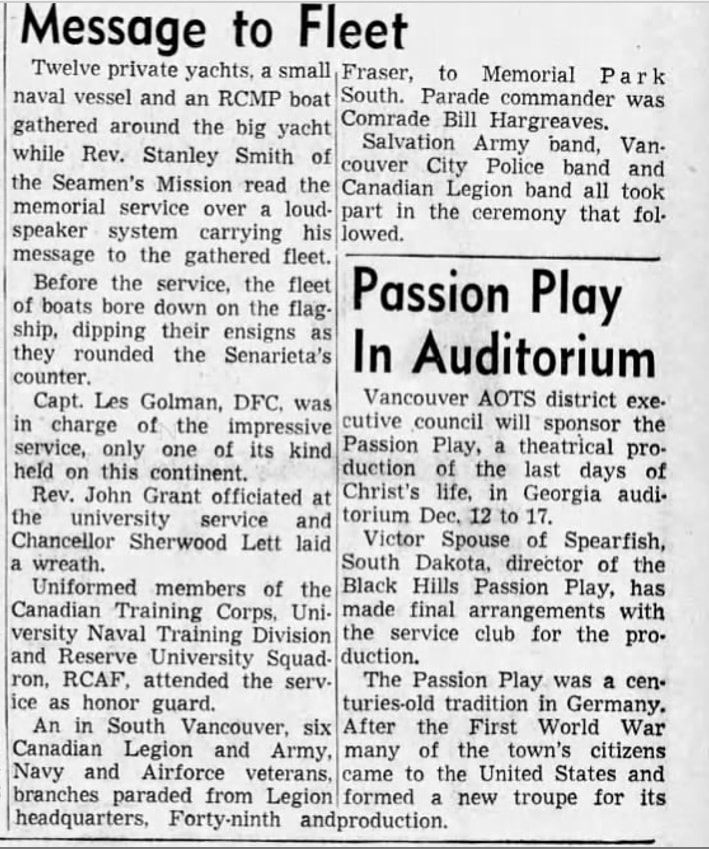 Major Reginald Scott Armitage
​Funeral will be held in Trinity Church, Sherbrooke, at 2.30 p.m. Tuesday for Reginald Scott Armitage, vice-president of Price Brothers Limited, Quebec, who died yesterday at the Western Division of the Montreal General Hospital. He was 62.
Born in Sherbrooke, Dec. 12, 1892, Mr. Armitage was educated there and at McGill University. He served in the Royal Canadian Artillery during the First World War and rose to the rank of major in the 43rd Battery.
He was seriously wounded in the war and returned to Canada to join the firm of Price Brothers in 1918. He remained with the firm until he death. Mr. Armitage was for some years manager for the company in Roberval and Chicoutimi and later in Rimouski. Several years ago, he was appointed vice president in Quebec City. He is survived by his wife, the former Georgette Marcotte, of Quebec, and a brother, Wendell, of Nansing, Mich.
Major Armitage served with the 62nd Battery, 15th Brigade, Canadian Field Artillery for a period during the First World War.

Gunner Murray Albion Cathcart
Former Reginan
16 June 1892 - 25 October 1955
​Pharmacist at the Saskatchewan hospital and resident of Weyburn since 1939, Murray A. Cathcart, 63, formerly of Regina, died Tuesday in Weyburn Civic hospital. Rev. C.W. Ramsay and Dr Rex R. Dolan will conduct the funeral service at 2.30 p.m. Friday at Calvary Baptist church, Weyburn and burial will be in Hillcrest cemetery, Weyburn.
Born in Chatham, Ont. Mr. Cathcart came west with his parents in 1904 and settled in Regina. He practiced pharmacy for a number of years in Regina, most recently at Lorne Drug Store and in 1939 accepted an appointment at the Saskatchewan hospital. During the First World War Mr Cathcart saw active service overseas with the 60th Field Artillery. A member of Masonic Lodge No 20 in Weyburn, Mr. Cathcart was also a charter member of Metropolitan United church in Regina and for a number of years had been deacon and Sunday school superintendent of Calvary Baptist church Weyburn. Besides his wife, Marjorie, Mr Cathcart is survived by two sons Dr. L.M. Cathcart, of Frontier and Hugh, of Saskatoon, a daughter Mrs. Rex. R. Dolan of Saskatoon, his mother. Mrs. J.R. Cathcart of Saskatoon, and two sisters, Mrs. W.J.E. Adamson, of Ottawa, and Mrs. E.J. Wilcox of Saskatoon.
Gunner Cathcart enroled with the 60th Battery, 15th Brigade, Canadian Field Artillery on 22 March 1916.

Sergeant John Arthur Hibberson
Suddenly on Aug. 21, 1955, at Oak Bay, B.C., John Arthur Hibberson, dearly beloved husband of Mabel, of 853 Byng St., aged 74 years; born in England, and came to Canada in 1901, and was married in Victoria on Oct. 19, 1910. Besides his wife, he is survived by one brother, Robert W., at present vising in England; one daughter, Doris Haywood-Farmer, Savona; one son, Robert J., 877 Byng St.; seven grandchildren; a cousin, Ethel, in England, and a cousin, Joseph R. of Victoria. Remains are resting in Hayward’s Chapel pending funeral arrangements.
Sergeant Hibberson  was a member of the 5th Regiment, Canadian Garrison Artillery before enlisting with the 62nd Battery, 15th Brigade, Canadian Field Artillery for the First World War. He served in Belgium and France with the 58th Battery, 14th Brigade, Canadian Field Artillery.

Gunner Walter Edward McEwen
6 January 1889 – 25 Sep 1955
​Born in Liverpool, England, Gunner McEwen was a North Vancouver longshoreman when he enlisted with the 68th Overseas Depot Battery, Canadian Field Artillery on 3 May 1916. He was transferred to the 62nd Battery, 15th Brigade on 15 May 1916 and embarked Halifax on 11 September 1916 onboard the S.S. Cameronia bound for Liverpool, England. On the dissolution of the 15th Brigade, he was transferred to the 4th Canadian Division Ammunition Column which later became the 5th Canadian Division Ammunition Column. He was interred in Mountain View Cemetery, Vancouver, BC.