VANCOUVER GUNNERS
as at 12 September 2018
Lieutenant Archibald Eric James Sudbury was a member of the 15th Field Brigade RCA in 1937 and during the unit's transition to the 15th (Vancouver) Coast Brigade RCA 15 Jul 1938. He transferred to the 16th Battery, 3rd Light Anti-Aircraft Regiment RCA in 1940 and was attached to the 21st Army Group Special Service on 7 Jun 1944. It was his performance during his attachment that  subsequently earned him the Croix de Guerre avec etoile d'argent on 28 Apr 1945. His citation reads as follows: 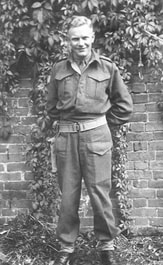 ​Citation:
"1. This officer was employed from 7 Jun 44 as Courier officer for Cdn Sec GHQ 2 Ech 21 A Gp.
2. During June, July & August 1944, his duties included:
(i) Liason between Adv Rft Control Officers of 2 Ech and the HQ of Adv Sec, Cdn 2 Ech in the theatre.
(ii) Carrying of despatches between Adv Rft Control officers and Adv Sec.
(iii) Carrying of despatches for 2 Ech and CMHQ to Naval Despatch Boat.
(iv) Conveying of verbal messages to various Staff Officers ar Fmn HQs.
3. From 8 Jul to about 16 Jul during the period of the attack and fighting around CAEN, it was this officer's daily duty to carry despatches over a stretch of territory which was under direct enemy observation and fire. This involved travelling by motor cycle or jeep over an exposed road constandly under fire, and offering no possibility whatever of obtaining cover. He set out on his run each time, knowing that this road had to be traversed but showed no hesitancy in this task and always got his despatch through.
4. In addition, durin the whole of the fighting round CARPEQUET, CAEN and the FALAISE GAP, his duties continuously too him through dangerous spots in which it was impossible for him to take measures to obtain cover or protection. His duties were always carried out cheerfully and with no regard dor his personal safety, and he was always willing to assume additional tasks of the same nature, over and above his normal duties."
Details:
With Silver Star 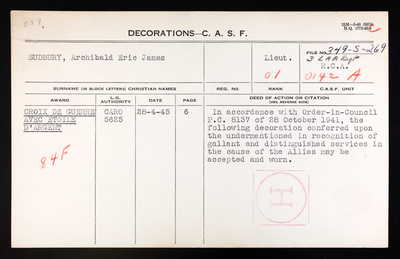