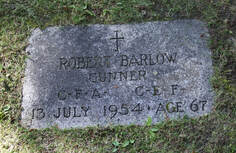 Gunner Robert Barlow
Robert Barlow, well known oldtimer of Kersley and Quesnel, died suddenly in Quesnel Hospital on Tuesday morning. He was 68. Mr. Barlow was admitted to hospital on Sunday after being ill at home for the past two weeks.
Born in Smithy Bridge, Lancashire, England, he came to Canada in 1904 to join his uncle, Abraham Barlow, who was the first Justice of the Peace for Cariboo. He made the trip to Canada with his sister and brother-in-law, Mr. and Mrs. John Strand. He resided at Kersley for years, becoming a Justice of the Peace and also serving as district mail carrier until He disposed of his property to Walter Edwards and moved to Quesnel.
A veteran of World War I, with three years service overseas, he took a keen interest in the Cariboo Branch of the Canadian Legion, and was frequently a member of the guard of honor during Armistice Day ceremonies.
On moving to Quesnel he became caretaker at the Quesnel School, a position he held until shortly after the opening of the new Junior-Senior High School. He was noted for his liking for children and had many a word of sound advice for the many youngsters he came to know well.
Well versed in the lore of the Cariboo and personally familiar with most of the old historical sites, he became an ardent supporter of the Quesnel Branch of the Cariboo Historical Society.
He acted as curator of the growing museum being built by the Historical Society and designed and made all the signs marking historical sites throughout the district. He was named a director of the Society this year.
It was his personal collection of relics that made possible the start of the museum now being expanded by the Historical Society and he was recognized as an authority on the early history of the area.
Another of his interests was the Quesnel Golf Club. Besides enjoying the game itself he acted as groundsman for several years and was responsible for many of the improvements made in the course.
He maintained a keen interest in sports and was an ardent fisherman.
Besides his wife he is survived by a son Jerry residing at the family home on McLean Street, a daughter, Mrs. Jean Grady of Wells, and a brother, Levi, also of Quesnel.
Funeral service will be held in St. Andrew's United Church at 2:30 p.m. Friday, with Rev. Donald W. Perrie officiating. He will be accorded full honors by members of Cariboo Branch, Canadian Legion, who will assemble at the Legion Hall at 2 p.m.
Quesnel Cariboo Observer 15 Jul 1954
Gunner Barlow enrolled in the 68th Overseas Depot Battery and sailed overseas as a member of the 15th Brigade, Canadian Field Artillery.
Sergeant Herbert John Gray
Passed away at his residence, 1280 Hornby St. June 19, 1954, in his 62nd year. Mr. Gray served overseas in the World War One. Survived by his loving wife Elizabeth; 1 daughter, Mrs. Fred Miller (Arne) and 2 grandsons, Bruce John Miller, Robert Gray Miller, all of Vancouver. Funeral service Tuesday, June 22 at 1 p.m. in the Georgia Chapel of Center & Hanna, 1049 W. Georgia. Rev. James Evans officiating, Internment Forest Lawn Memorial Park.
Sergeant Herbert Gray enlisted with the 68th Depot Battery, Canadian Field Artillery on 21 February 1916 and served with the 1st and 4th Canadian Division Ammunition Columns in France and Belgium.
Lists
The following pages contain additional information relating to the 15th Field Artillery Regiment, RCA
Honours and Awards
Trophies
Commanding Officers and Regimental Sergeants Major
Honoraries
Battery Commanders and Battery Sergeants Major
Band Appointments
Nominal Roll
Guns of the Regiment
Memorial Page
Copyright © 2015, 2016, 2017, 2018, 2019
Webmaster/editor - Leon Jensen, OMM, CD, Commanding Officer 1998-2001, Regimental Sergeant Major 1986-1988
Additional photos and stories as well as comments regarding errors and omissions would be greatly appreciated. ​
​Have I inadvertently placed personal information of yours on line that you don't approve of?
​Please accept my apologies and contact me at president.vcrgunners@gmail.com and I’ll have it removed.