VANCOUVER GUNNERS
as at 6 November 2020
Driver Weston Baldwin DCM
Enlisted with the 62nd Battery, 15th Brigade, Canadian Field Artillery in Victoria. served in France with 51st Howitzer Battery, 13th Brigade, Canadian Field Artillery. His citation for the  Distinguished Conduct Medal reads:​
For great gallantry and devotion to duty  since August 1917, especially night on 4th-5th  Nov. near Onnaign, as lead driver of a wagon bringing ammunition to the battery position. On arrival he found the position being shelled. he drove up to his gun, had his wheel driver hold the horses, and himself unloaded his wagon and returned down the road to the wagon line. 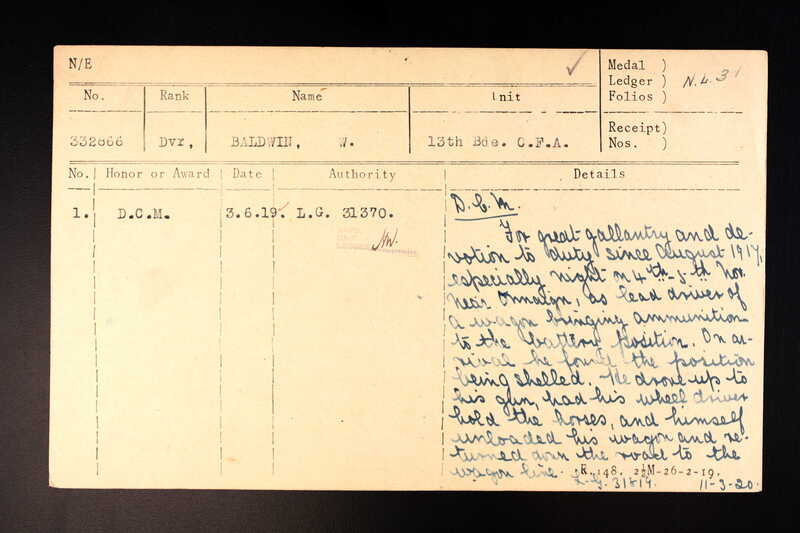 Battery Sergeant Major Mark Beards DCM
Served in France with the 22nd Battery, 6th Howitzer Brigade, Canadian Field Artillery. He was awarded the Distinguished Conduct Medal for:
Acts of gallantry and devotion to duty in the field.
He was wounded 21 October 1916 and after convalescing, he was posted to the Royal Canadian Horse Artillery and attached to 68th Depot Battery, Canadian Field Artillery as an instructor. 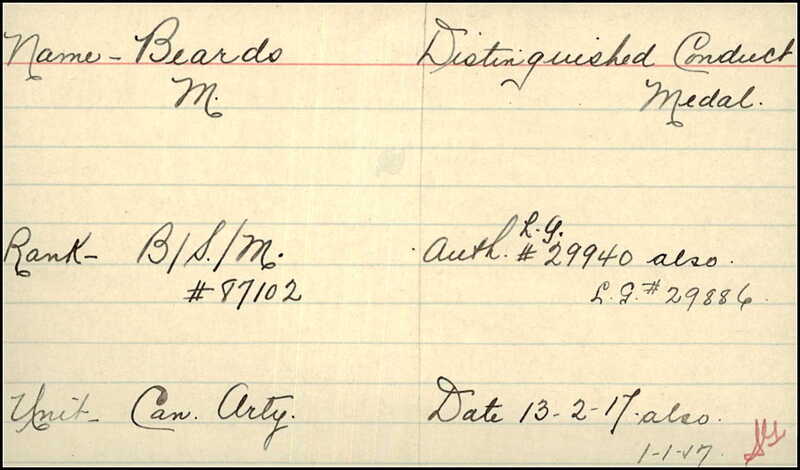 Sergeant Ralston Alexander Johnston DCM
Served in France with the  6th Brigade, Canadian Field Artillery. He was awarded the Distinguished Conduct Medal on 3 June 1919 and his citation reads:
He has shown consistent courage and ability as a leader of his sub-section. During the Canal du Nord attack when the officers at the guns became casualties he attended to the dressing  of the wounded and kept all guns in action. 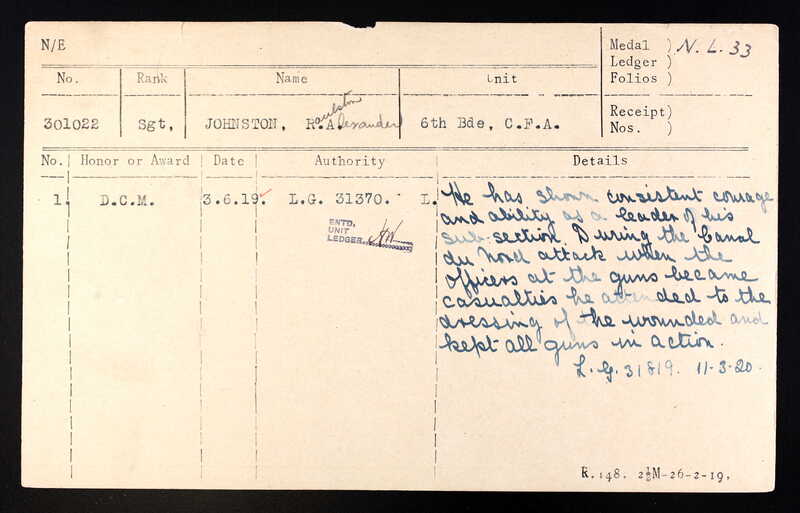 Battery Sergeant Major Herbert Rexford Lea DCM
Appointed Battery Sergeant Major of the No. 5 Siege Battery, Canadian Garrison Artillery on 11 Jul 1916 prior to the Battery's embarkation from Canada. He retained that role through their deployment to France until he was hospitalized on 16 Mar 1919. His citation for the Distinguished Conduct Medal reads:
During the night of 27th March, 1918, while the battery position in Thelus was being heavily shelled with gas and high explosive, he, with a fine disregard of personal safety, went to all the dug-outs and shelters ordering men to put on their gas masks and directing men to deeper dug-outs for safety. He has consistently set a high example to those under him. 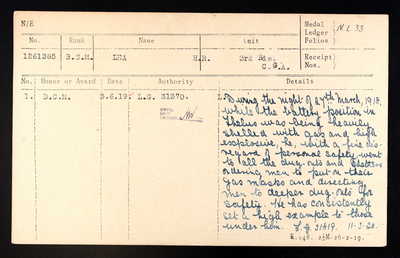 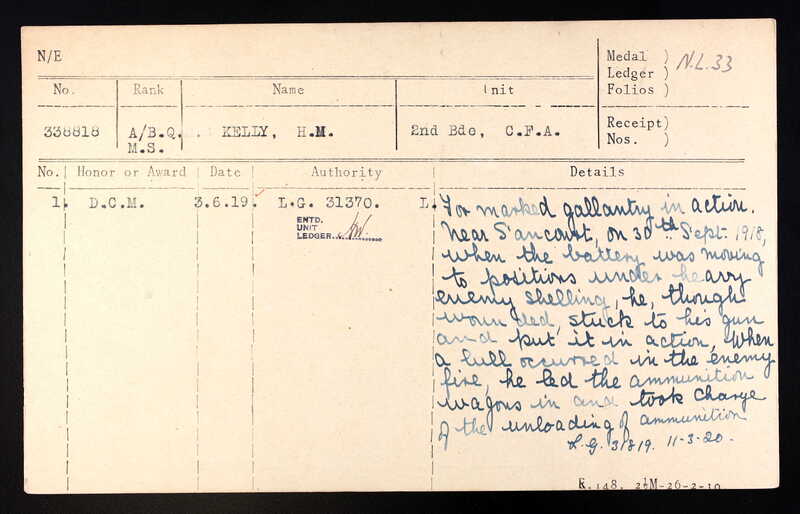 Bombardier John Markham McLane DCM
Attested into the Vancouver Volunteer Reserve, Boorman's Battery on 8 October 1915. He served overseas with the 3rd Canadian Division Ammunition Column where he was recognized for his act of gallantry. His citation reads:
During a bombardment by aircraft at night the wagon lines were heavily bombed a number of casualties being caused to personnel and horses. This driver organized rescue parties and sent for ambulances. For more than an hour the place was bombed the work of rescue being made more dangerous by the explosion of a dump. His coolness and organizing ability inspired those with him and saved many lives. 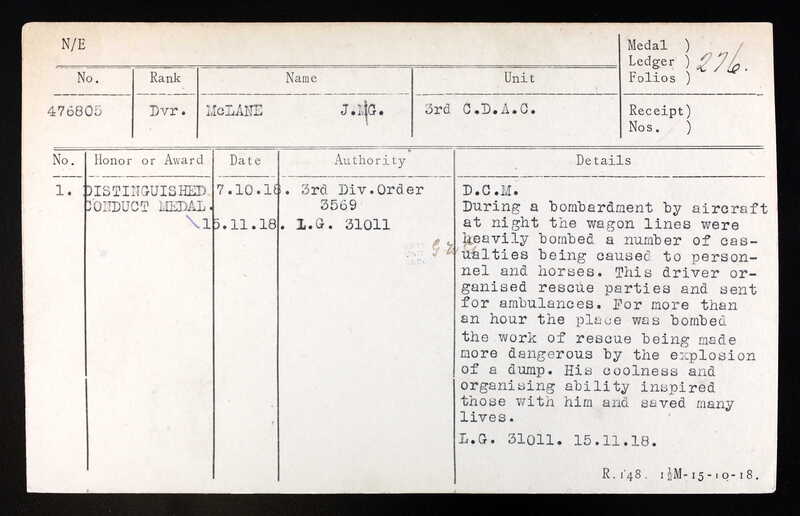 Corporal Robert Lloyd Seaman DCM
Enroled in the 26th Battery, 7th Brigade, Canadian Field Artillery, Canadian Expeditionary Force on 25 March 1915. He was transferred to 68th Battery 16th Brigade Canadian Field Artillery, North Russia Expeditionary Force on 21 August 1918. His citation for the Distinguished Conduct Medal reads:
For conspicuous gallantry and devotion to duty. He was in charge of the forward signallers and advanced with the infantry engaged in the attack on KODISH, December 30th.  he was responsible for communication with front line and company headquarters, and several times went forward in front of infantry  under heavy fire to establish his line. It was due to his untiring energy and splendid example that communication was kept up. Throughout the operation he behaved admirably. 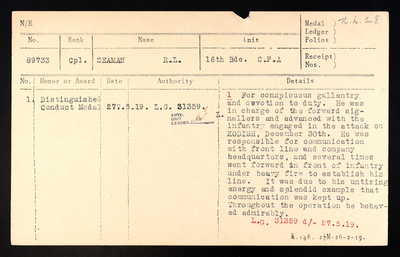 Acting Sergeant (Cadet) Raymond Franklin Sharpe DCM
Enrolled in the 68th Overseas Depot Battery in Vancouver on 7 Apr 1916. He was subsequently posted to the 1st Heavy Battery Canadian Garrison Artillery. His citation for the Distinguished Conduct Medal reads:
For conspicuous gallantry and devotion to duty in volunteering three times to go through heavy fire to search for wounded men of another battery. His coolness and gallantry were remarkable. 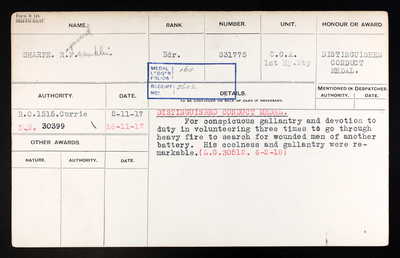 Warrant Officer Class II Thomas Tomkinson DCM
Battery Sergeant Major of the 68th Battery, 16th Brigade, Canadian Field Artillery, Northern Russia Expeditionary Force. His citation for the Distinguished Conduct Medal reads:​
At Kodema, on 15th December 1918, all the sergeants of the Battery being in charge of other guns on other fronts, he acted as No. 1 of the gun employed in this operation with great success and marked courage at a range of 800 yards under heavy rifle and machine gun fire. 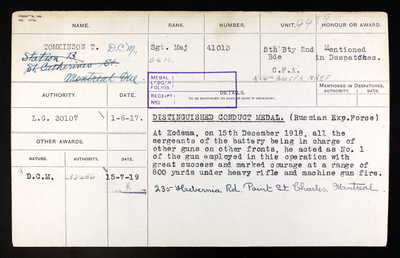 Battery Quarter Master Sergeant John Arthur Ware DCM
The citation reads:
For conspicuous gallantry and devotion to duty on many occasions under heavy shell fire. His unfailing courage, energy and cheerfulness greatly assisted to inspire all ranks with him. 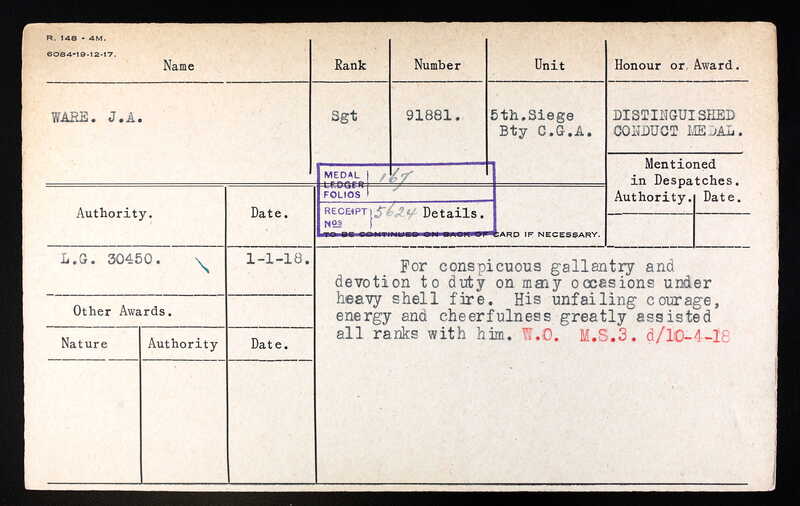 Battery Sergeant Major Creswick Claude Whebell DCM
Enlisted with the 68th Overseas Depot Battery on 25 April 1916. He had twelve years previous service with the Royal Field Artillery.  The Distinguished Conduct Medal was awarded during his service with the 5th Canadian Divisional Artillery Colum and the citation reads:
He has shown consistent courage and resourcefulness during shelling and bombing, particularly at La Folies, Vis-en-Artois and Feounlon Wood. On 30th August, 1918 at Arras, when men and horses of his section were killed and wounded by shellfire, he showed great initiative when moving the section and undoubtedly saved several casualties 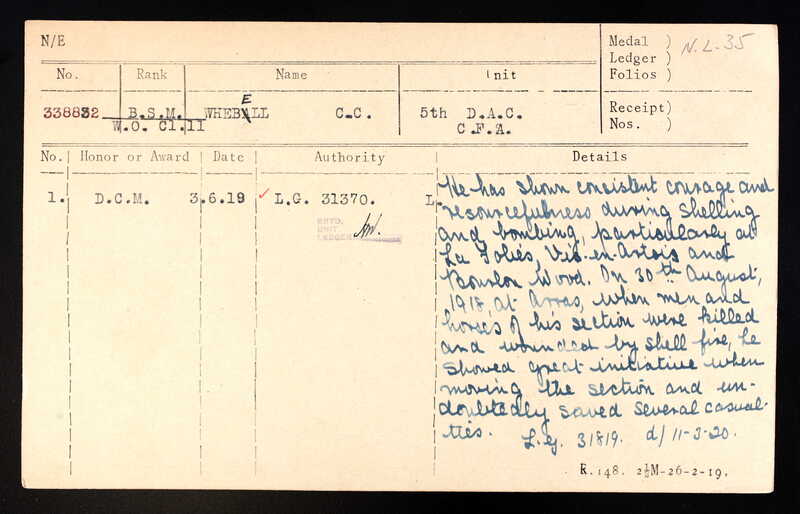 Sergeant Claude Drone Winegard DCM
Awarded the Italian Bronze Medal for Valour while serving with the 12th Brigade Canadian Field Artillery prior to his transfer to 68th Battery 16th Brigade Canadian Field Artillery Northern Russia Expeditionary Force where he was awarded the Distinguished Conduct Medal. His citation reads:
For conspicuous gallantry and good work. On 1st March 1919, at Vistafka, heavy enemy shellfire caused an outbreak of fire at in the billets, stables and ammunition dump. He mustered the drivers and spare gunners and saved all the horses and a considerable quantity of ammunition. On 3rd March, at Vistafka, when the enemy had surrounded the position, he with two others formed a patrol and, crawling to within 50 yards of the enemy outpost, with machine gun fire forced them to withdraw. This achievement was the result of securing very valuable information. 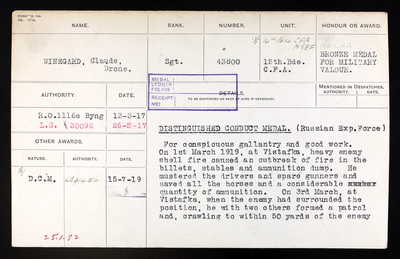 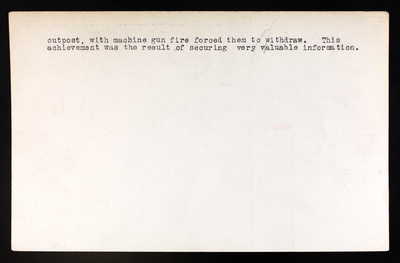 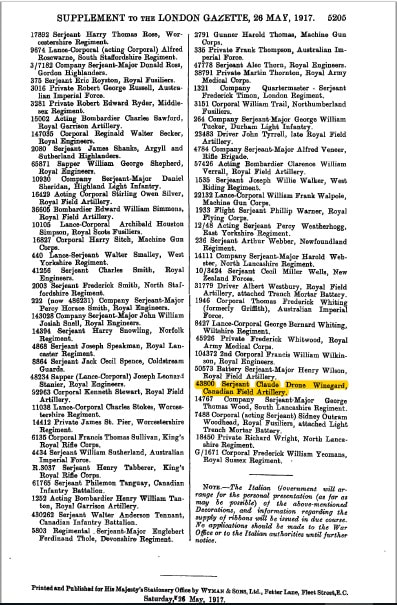 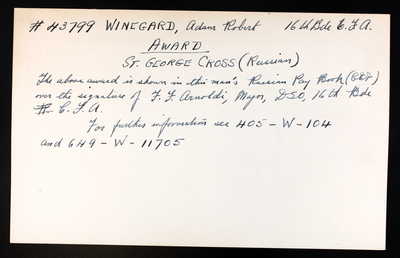