VANCOUVER GUNNERS
Area Commander's Inspection
﻿​Regimental Parade -
​The Regiment holds a parade in the Safeway parking lot on West Broadway.  The McGavin’s Bakery stands at the south west corner of Broadway and Arbutus and you can clearly see the huge hand holding a big loaf of bread on the roof reflected in the store windows. Note that the guns are the original M1A1 model (today they would be called C2s). The reviewing Officer is Brigadier Danby, the Area Commander. To his right is Lieutenant-Colonel Blyth, a former Commanding Officer of the 43rd Medium Anti-Aircraft Regiment.  At the right of the reviewing platform is Major ‘Buck’ Buchanan and to the rear a Major from the Royal Canadian Dragoons. All three were working as staff officers at Headquarters.
The Regimental band marches past with Jim Hamilton as Drum Major and Warrant Officer Class 1 Al Sweet is the Bandmaster. Regimental Sergeant Major Warrant Officer 1 David R Penman is third man from the the right in the march past.
Second Rank, fifth man in – Lance Bombardier Eric Tyldesley-Gore. Lance Bombardier Eric Tyldelsley-Gore shows up again as the reviewing Officer Brigadier Danby inspects the front rank.
The Reviewing Officer, Brigadier Danby inspects the Band with the Bandmaster, Warrant Officer 1 Al Sweet. 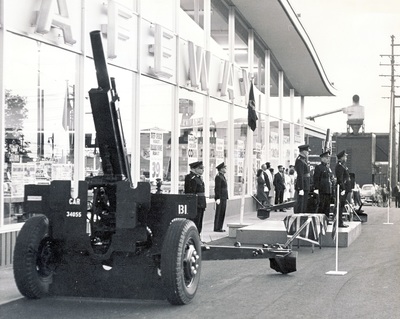 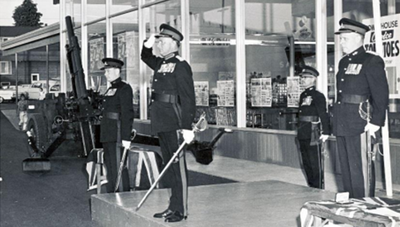 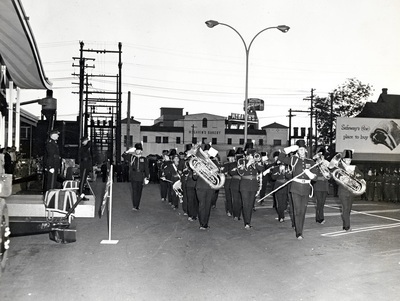 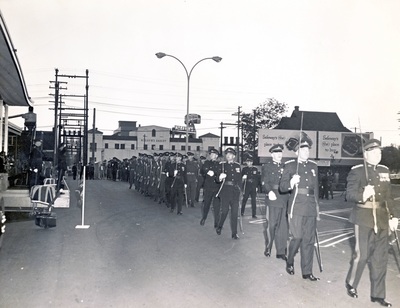 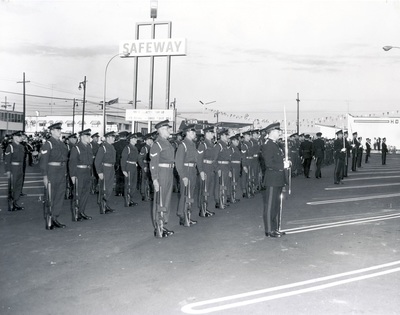 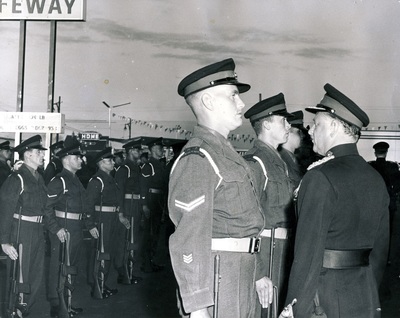 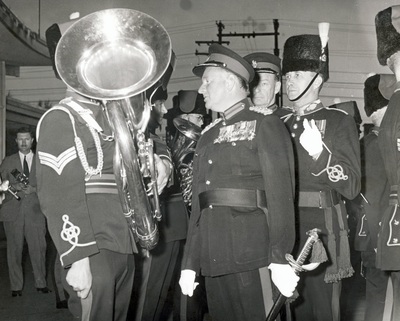 Back to 1962
Copyright © 2015, 2016, 2017, 2018, 2019, 2020, 2021
Webmaster/editor - Leon Jensen, OMM, CD, Commanding Officer 1998-2001, Regimental Sergeant Major 1986-1988
Additional photos and stories as well as comments regarding errors and omissions would be greatly appreciated. ​
​Have I inadvertently placed personal information of yours on line that you don't approve of?
​Please accept my apologies and contact me at president.vcrgunners@gmail.com and I’ll have it removed.