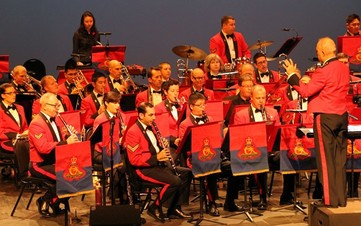 Remembrance Day with the Band of the 15th Field Artillery Regiment
Renowned part-time reservists play at Millennium Place on Nov. 9
By Cathryn Atkinson Pique Newsmagazine A&E
​Captain Jim Tempest is looking forward to a weekend in Whistler with his band of brothers and sisters.
The musical director of the Band of the 15th Field Artillery Regiment based in Vancouver, he and the band's 40 other members will be on hand this Remembrance Day long weekend at Millennium Place to play on Saturday, Nov. 9 at 7:30 p.m.
"A portion of the show will be remembrance, but it's a wide variety. We're doing everything from classical music right up to contemporary pop tunes," Tempest says.
The band has played at the resort many times, but this is the first concert here at this time of year. Along with their standards in fanfare, jazz and swing they will play works from "Hymn to the Highlands" in honour of those who have served in the armed forces.
"The band has played in Whistler, off and on, probably for about 25 years, usually during the summer. This is the first time we've ever been up outside of the summer season," he says. "We're really excited to be working with the Whistler Arts Council this year; it's a first for us — a great opportunity for us to bring our Remembrance Day show up."
The band is very much in demand at this time of year.
"On the Friday before we come up (Nov. 8) we're doing an army change of command parade in Vancouver at the Jericho Garrison. Then we play North Vancouver on Nov. 11. And our trumpeters are playing Last Post and reveille all over the place this week," Tempest says.
"This is the fifth year we've done a Glowing Hearts concert on the Remembrance Day weekend or the weekend prior."
Tempest explains that the band is composed of part-time reservists; he, himself, teaches music full time at Vancouver Community College. He joined the band as a musician in 1985 and has been director of music since 2004.
"We come from all backgrounds. We've got students, lawyers, accountants, university professors, you name it. About a third of the band are professional musicians," he says.
"We rehearse once a week and do things like the Whistler event. It's probably the equivalent of one week a month that members of the band put in on evenings and weekends."
The band is a sub-unit within the larger regiment. There are no full-time army regiments in British Columbia after the last base was closed in Chilliwack in the 1980s.
"There are 15 regiments across B.C. and we're one of them," Tempest says.
They are fully capable of marching while playing — and do so at special events, most recently in Ottawa — but since Millennium Place is a bit small for a 40-person military parade, they will be sitting down this time.
Tempest says about half their players are women, which remains an unusually egalitarian split for the armed forces.
"It's unusual. The profession of arms doesn't generally attract very many women, but within the music trade that is different," he says.
The entire band is aware of the goodwill they bring.
"It's really great for us to come to a community like Whistler because it's an opportunity to get the word out about the army reserve in B.C. and do what we call 'connect with Canadians.' We provide an opportunity for people to speak to us about what the Canadian forces are doing across B.C. and Canada, and around the world," Tempest says.
Tickets for the concert are $15 and can be purchased at Millennium Place or at www.whistlerartscouncil.com.
http://www.piquenewsmagazine.com/whistler/remembrance-day-with-the-band-of-the-15th-field-artillery-regiment/Content?oid=2483891
Back to 2013
Copyright © 2015, 2016, 2017, 2018, 2019, 2020, 2021
Webmaster/editor - Leon Jensen, OMM, CD, Commanding Officer 1998-2001, Regimental Sergeant Major 1986-1988
Additional photos and stories as well as comments regarding errors and omissions would be greatly appreciated. ​
​Have I inadvertently placed personal information of yours on line that you don't approve of?
​Please accept my apologies and contact me at president.vcrgunners@gmail.com and I’ll have it removed.