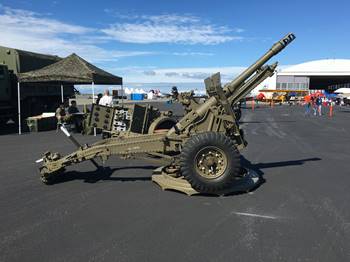 ​On Saturday July 23, the Vancouver Artillery Association took the 25pdr to the Boundary Bay Airport to join members of the Regiment in setting up a display for the annual Airshow.  This year, the Airport is celebrating 75 years since it was first opened during WW2.  In the mid 1960s, the Regiment had a Battery (85 Bty) parading in the old hanger on the base, which make the Regiment part of the Airports heritage and, every year, the Airport invites the Regiment to send a display to this event.
​ This picture were taken before the gates opened to the public.  Here, the 25pdr and limber are set up with the old hangar in the background and the Regiment’s display and gun tractor to the left.  The C3 and mortar are obscured by the 25pdr
The Regiment set up a 105mm C3 with its tractor, an 81mm mortar, a display of webbing and packs and a helmet and casing for the public to check over.  We set up the 25pdr and limber on the other side of the display area.  Unfortunately, we were unable to take the FAT out and had to use one of John Hawthorne’s vehicles, driven by Chuck Ingram.  Chuck, his brother Bill and members of the Regimental group, helped us deploy and set up the gun as well as hooking up on both legs of the trip and putting the gun away on return to the Armoury.

​Chuck and Bill also helped man the gun, along with Bernie Rowe and Bob Mugford (your writer), during the show making sure no kids hurt themselves and answering questions from the public.  When the gates opened at 1100 the crowd surged in and there was always a crowd around the guns.  Both teams were kept very busy answering questions and entertaining all the kids.  We all thoroughly enjoyed the day, in spite of coming home with sunburnt faces.
Another view looking towards the airfield, showing
The 105 C3 and the 81mm mortar
The Airshow was very interesting, with many different aircraft making flybys and performing acrobatics.  Most popular was the flyby featuring a B17 and an F4U Corsair and another featuring a P38 and a Japanese ‘Oscar’.
​Many thanks to the hard working members of our team, and of the Regimental team who gave us much assistance and support.
Back to 2016