The Canadian Forces' Decoration is awarded to officers and Non-Commissioned Members of the Canadian Forces who have completed twelve years of service. The decoration is awarded to all ranks, who have a good record of conduct.
The decoration is awarded to the regular forces, reserve forces, officers of the Cadet Instructors Cadre (CIC), Canadian Rangers and holders of honorary appointments in the CF. Service in the regular and reserve or auxiliary forces of the British Commonwealth of Nations will be counted towards the medal if the final five years have been served with the Canadian Forces and no other long service, good conduct or efficiency medal has been awarded for the same service. The medal may be awarded to persons in possession of any long service, good conduct or efficiency decoration or medal clasps, provided that the individual has completed the full qualifying periods of service for each award and that no service qualifying towards one award is permitted to count towards any other. The service need not be continuous.
It is a decagonal (ten-sided, representing the ten provinces) gold plated brass medal, 36mm across the flats, bearing:
on the obverse a youthful effigy of Her Majesty the Queen wearing a wreath of laurel leaves in her hair and facing right, circumscribed with the legend "ELIZABETH II DEI GRATIA REGINA - CANADA"; and
on the reverse appears, from top to bottom a naval crown, three maple leaves and an eagle representing the Navy, Army and Air Force. The word "SERVICE" appears on a scroll at the bottom and two fleur-de-lis are depicted on each side of the crown.
The suspension consists of a small bar between two scroll arms emerging from a natural maple leaf at the top of the medal.
The ribbon is 38mm wide, red with three equally spaced thin white lines, red and white are the official colours of Canada as appointed by King George V in 1921.
The clasp (bar) for the Decoration is 6 mm high, has the shield of the Canadian coat of arms in the center surmounted by the Crown, and is gold in colour. 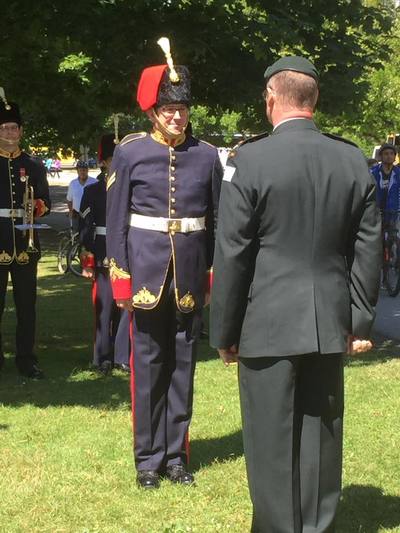 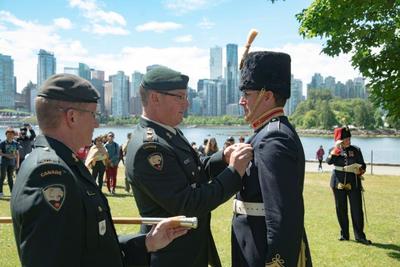 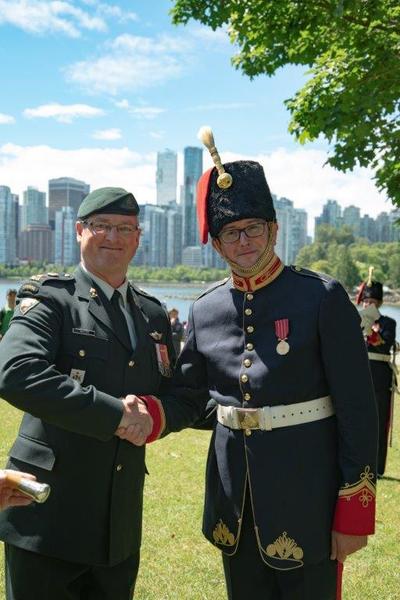 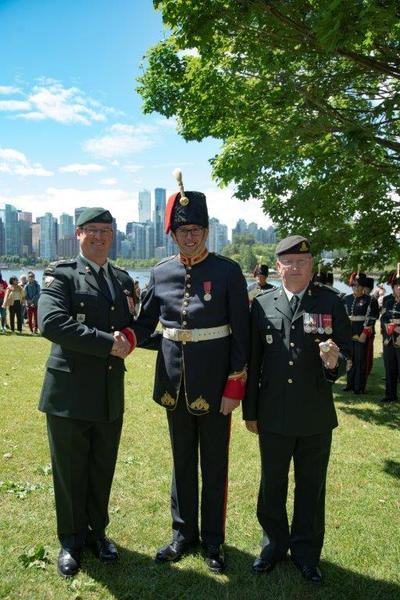 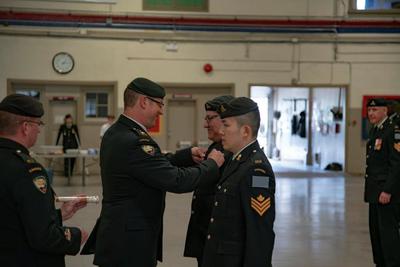 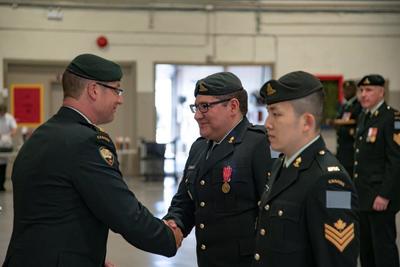 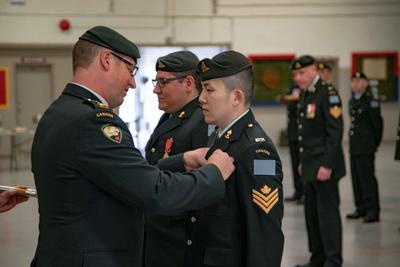 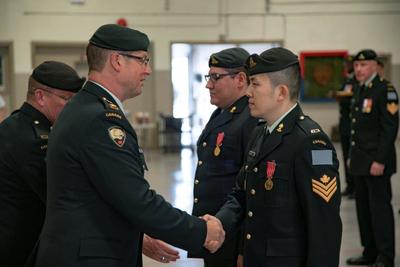 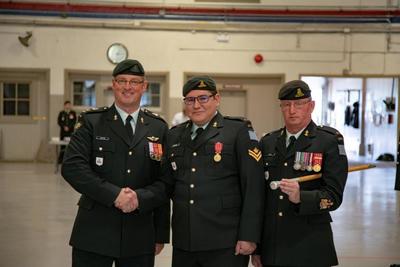 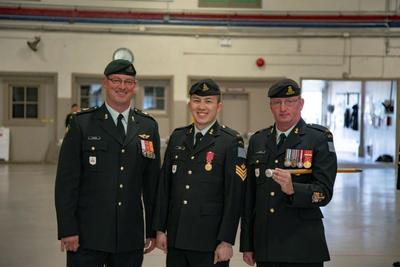 ​Master Bombardier Stephan Figuerora, CD and Sergeant Jayson Wong were awarded their Canadian Forces Decorations at Bessborough Armoury on Canada Day by the Second in Command, Major Nick Watts CD with the Regimental Sergeant Major, Chief Warrant Officer Rob Garrett CD.
Back to 2018
Copyright © 2015, 2016, 2017, 2018, 2019, 2020, 2021
Webmaster/editor - Leon Jensen, OMM, CD, Commanding Officer 1998-2001, Regimental Sergeant Major 1986-1988
Additional photos and stories as well as comments regarding errors and omissions would be greatly appreciated. ​
​Have I inadvertently placed personal information of yours on line that you don't approve of?
​Please accept my apologies and contact me at president.vcrgunners@gmail.com and I’ll have it removed.