VANCOUVER GUNNERS
EX CRIMSON DAWN 21-25 April 2011
Lieutenant Dorian Young
Following the recent grounding of C3 howitzers, the planned joint gun exercise between the 5th (BC) Field Regiment, RCA and the 15th Field Regiment, RCA was facing some significant difficulty. However, the planning staff got to work and quickly came up with an alternative plan - Ex CRIMSON DAWN. Taking place over the Easter weekend (21-25 April) in Yakima, WA, what was initially planned as a gun exercise was quickly converted into a counter insurgency (COIN) operation. With mounted and dismounted operations taking place over nearly 30 square kilometres, gunners were tasked with conducting recce patrols, cordon and search ops, as well as practicing ambush and IED drills.
The Vancouver Police Department (VPD), who had previously offered to act as OPFOR for the gun ex, was now double-hatted with the additional role of local police/civilian elements of Yakistan. This dual role would often lead to situations where the VPD-OPFOR would carry out IED strikes on coalition vehicles and then disappear, only to return shortly after (now dressed in the garb of the local police force) to demand supplies and money in return for their efforts that day against the insurgents. Such flagrant behaviour only served to push tensions higher in the complex environment, especially when these demands occurred while coalition forces were still treating the simulated casualties caused by their earlier attacks.
Despite these challenges, the gunners of 391 Company (hastily converted from 391 Battery) were able to successfully establish their presence within the AOR and carry out their assigned patrols. On the third day, 3 Platoon was able to secure intelligence that indicated a local bomb-maker was building IEDs in a nearby village. Acting quickly, the platoon established a cordon around the village and passed on the information to Coy HQ. Orders for the assault on the town were drawn up and then disseminated throughout the troops. At dawn the following day, a company-level attack took place, aptly demonstrating the concept of the three block war as the tempo of the operation shifted from peacekeeping/ humanitarian operations to full scale FIBUA-type actions. Following the successful conclusion of the urban assault, a quick debrief was given and then the company was back to their patrolling.
For the final act of EX CRIMSON DAWN, the last vestiges of the OPFOR seized control of a friendly village on the outskirts of the AOR. They then proceeded to open fire on 2 Platoon as their convoy approached the village, forcing 2 Platoon into a hasty attack that swept in from the right flank. Another round of FIBUA took place and at last the VPD-OPFOR was destroyed. Endex was declared and all involved declared the exercise a rousing success - despite the unexpected grounding of the guns.
The Quadrant, Volume 28, Issue 2, Autumn 2012 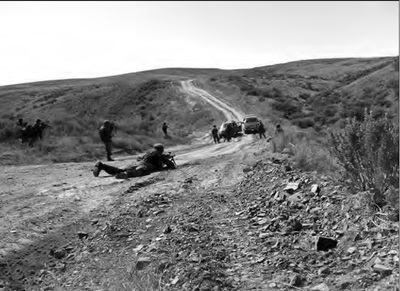 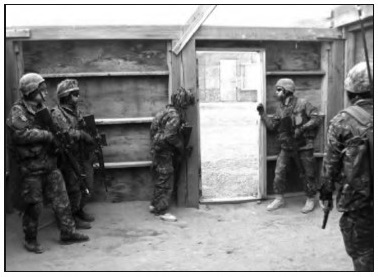 Back to 2011
Copyright © 2015, 2016, 2017, 2018, 2019, 2020, 2021
Webmaster/editor - Leon Jensen, OMM, CD, Commanding Officer 1998-2001, Regimental Sergeant Major 1986-1988
Additional photos and stories as well as comments regarding errors and omissions would be greatly appreciated. ​
​Have I inadvertently placed personal information of yours on line that you don't approve of?
​Please accept my apologies and contact me at president.vcrgunners@gmail.com and I’ll have it removed.