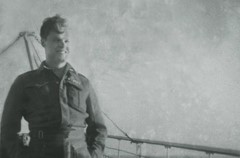 Ringleader Bob McEwen, now 83.
There were quite a few wrinkles in demobilizing after the war. How to put thousands of veterans back to work afterwards and find them places to live. The following article relates the takeover of the old Vancouver Hotel.

The Night War Vets Seized the Vancouver Hotel
Back from battle in 1946, they had to fight for shelter.
By Claudia Cornwall, 13 Nov 2006, TheTyee.ca

One placard said: "Welcome Home. What home? Where?"
On the evening of January 5, 1946, ex-serviceman Bob McEwen was camped out on the Vancouver Courthouse lawn with three of his mates to protest the acute shortage of housing for veterans trying to resume life after the Second World War. To emphasize their point, the men had pitched a tent and lit a bonfire.