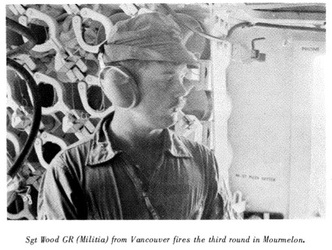 Sgt George R Wood is attached posted to B Battery, 1st Regiment Royal Canadian Horse Artillery in Lahr, Germany as part of the reserve augmentation force to units of 4 Canadian Mechanized Battle Group. During his attachment, the regiment conducted their first ever live firing exercise in Mourmelon, France.  This exercise was conducted with the 1 R22eR Combat Team and featured the usual dry manoeuvre training. Naturally, all the drills associated with the functioning of an artillery battery were practised, but it meant little to the infantryman who could not see the rounds land.
Then the moment came, the moment when B Battery demonstrated its role in the combat team. At 0737 hrs on 08 Aug 71, B Battery fired its first round during the Mourmelon exercise, and in doing so, added another page to the history of 1 RCHA. What was the significance of that round? It was the first round fired by 1 RCHA on French soil since WW1. Who will remember it? BSM Glen Armstrong will! He fired it! As will Sgt Carpenter, RCASC for firing the second round and Sgt Wood, the third. In particular, Sgt Wood will remember it as the first time he has commanded an M109 during live firing. (Nor should he forget, being the first militia Sgt not on active duty to fire in France)
The Canadian Gunner 1971, Volume 7, December 1971
15th Field Artillery Regiment had a second member on augmentation to the 1st Regiment, Royal Canadian Horse Artillery. Bombardier Richard J Van Slyke was attached to A Battery as a gun number with callsign 15F. Both Sergeant George Wood and Bombardier Van Slyke can be seen on parade formed up with the 1st Regiment Royal Canadian Horse Artillery. Bombardier Richard Van Slyke is possibly indicating the size of fish caught off the coast of BC or describing his trumpet?
​The Reviewing officer and the senior officers in 1 RCHA still wear their Horse Artillery patrol dress for the inspection.​ Note the different uniforms worn by the reservists as their units undergo the transition from Battle Dress to the new CF ‘Greens.’​ Bombardier Richard Van Slyke is the right file in the rear rank while Sergeant George Wood is the left man in the supernumerary rank.
​​Note the combination of both FNs and SMGs on parade.  ​L19 pilots needed to demonstrate their ability to perform a close flyby
​​1 RCHA used the parade to  showcase their 9-pounder gun. ​The Canadian Armed Forces had a band stationed in Europe that was available for parades.
The 155mm M109 howitzer is just a tad larger than the 105mm C1 howitzers back in Vancouver.
The troop train from Lahr to the firing ranges.
​The trusted Boeing 707 from Service Air. ​Heading home at the end of another successful REFORGER exercise.
​​Of course the flyover was not just about field exercises and parades. Those stories are best left to be told in the Mess afterwards. 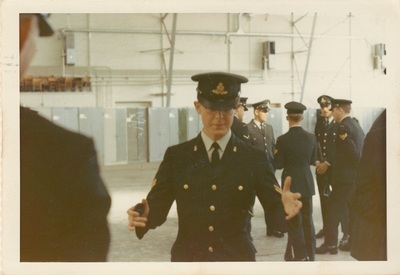 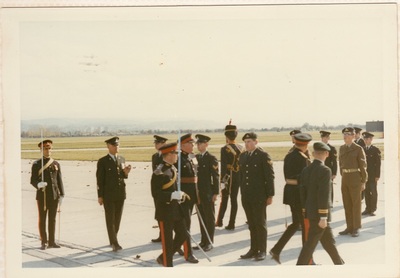 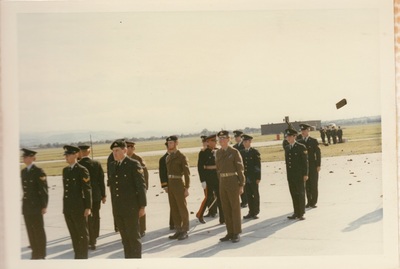 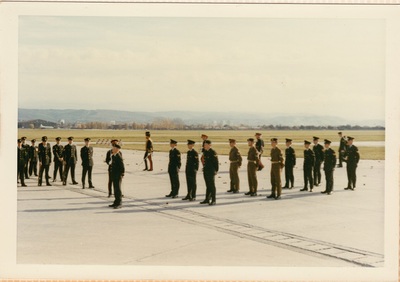 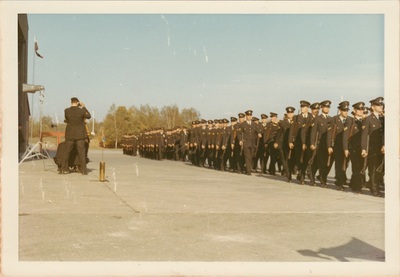 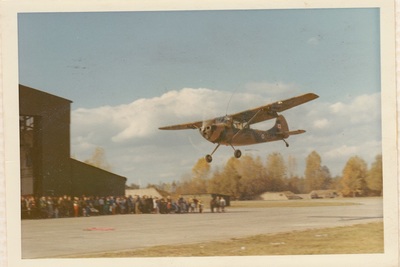 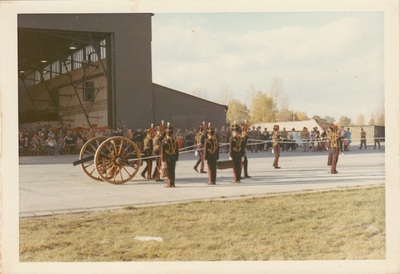 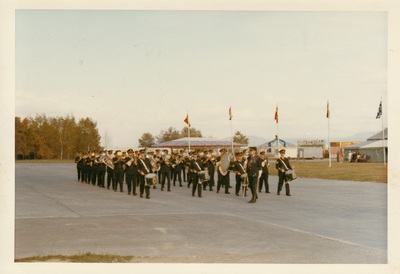 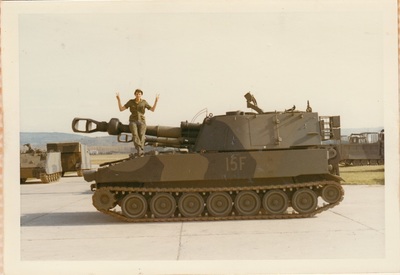 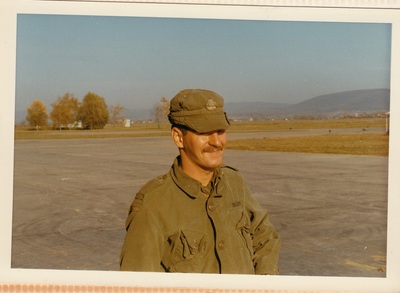 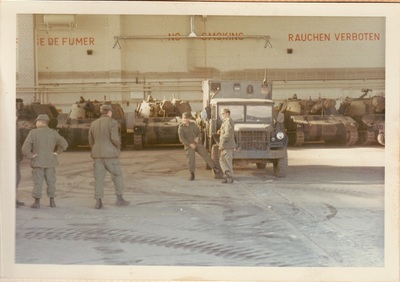 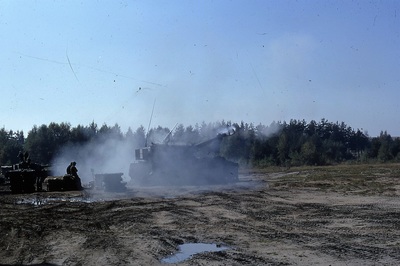 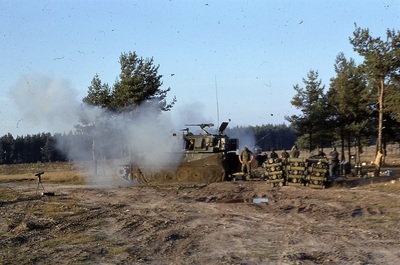 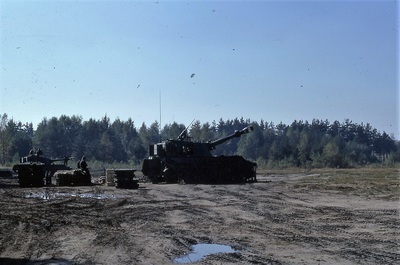 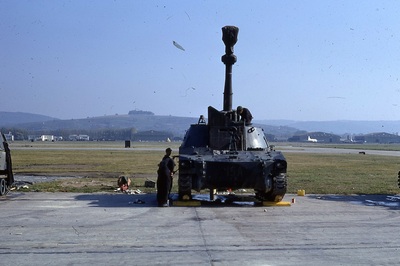 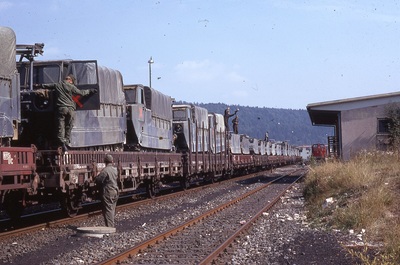 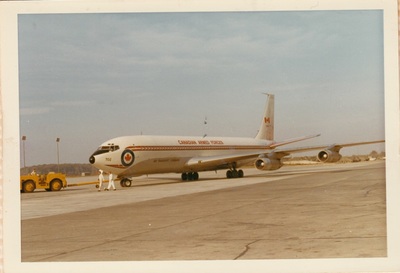 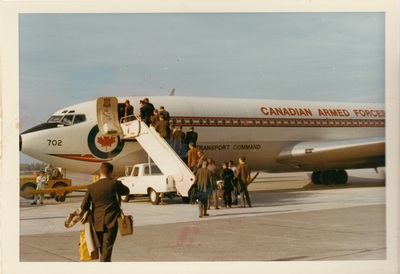 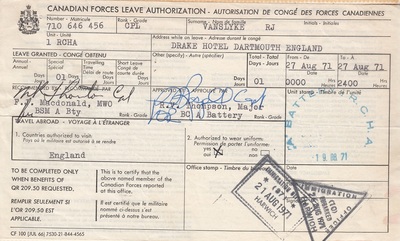 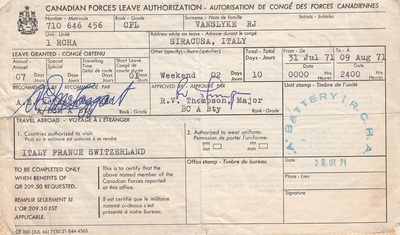