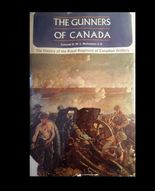 Volume 1 of The Gunners of Canada will be published by McClelland and Stewart, Ltd., early in the summer of 1967. This official history of The Royal Regiment of Canadian Artillery, written by Colonel GWL Nicholson, former Director of the Army Historical Section, has been commissioned by the Royal Canadian Artillery Association.
Volume I covers the history of artillery in Canada from the early colonial period to the end of the first World War. It is the story of the antecedents, the organization, and the growth of a proud and spirited military body which has contributed so much to the growth of Canada and the success of the Canadian Army in battle. Volume II, scheduled for publication in two years’ time, will bring the story up to the present day.
The history will be profusely illustrated with photographs, many of them hitherto unpublished, and will include a large number of maps, black and white, and in colour. Handsomely produced, it will be a book that Gunners will be proud to own. The retail price of the first volume of The Gunners of Canada will not be less than $8.50 a copy. Details will be circulated through Regular and Militia artillery units and through battery and regimental Old Comrades Associations. Enquiries and orders may be sent to the Secretary-Treasurer, Royal Canadian Artillery Association, 615 Tilbury Avenue, Ottawa 13, Ontario.
The Canadian Gunner, Volume 2, December 1966
Back to 1966
Copyright © 2015, 2016, 2017, 2018, 2019, 2020, 2021
Webmaster/editor - Leon Jensen, OMM, CD, Commanding Officer 1998-2001, Regimental Sergeant Major 1986-1988
Additional photos and stories as well as comments regarding errors and omissions would be greatly appreciated. ​
​Have I inadvertently placed personal information of yours on line that you don't approve of?
​Please accept my apologies and contact me at president.vcrgunners@gmail.com and I’ll have it removed.