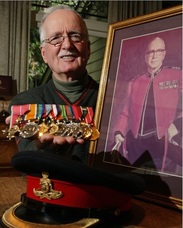 Ethan Ribalkin, ctvbc.ca
Published Thursday, June 5, 2008 5:32PM PDT
A Vancouver police drug bust at a West End apartment resulted in the arrest of three men -- and the discovery of 10 war medals that were stolen four decades earlier.
The medals from the First World War and Second World War had belonged to Vancouver war hero Aeneas Bell-Irving, who died in 1966.

Darg Bell-Irving, 78, displays the First and Second World War Medals belonging to his late father Aeneas Bell-Irving, which were stolen during a break-in more than four decades ago and recovered by police last month, at his home in Vancouver, B.C., on Thursday June 5, 2008. (Darryl Dyck / THE CANADIAN PRESS)

Speaking to reporters at a police press conference in Vancouver Thursday, the war hero's 78-year-old son Darg Bell-Irving said he is happy that the medals have been recovered after all those years.
"It's certainly a great surprise and a great pleasure," he said.
He said his father lived in a little beachfront house on Point Grey Road, which was broken into a couple times in 1962.
"My sister thinks that maybe the medals were stolen twice," he said. "The original medals were stolen and then he had them replaced and they may have been stolen again."
Darg Bell-Irving said he looks forward to comparing the medals with his father's war photographs and discovering what each piece was awarded for.
"I have great pride in belonging to a family that has a very extraordinary background in terms of its involvement in the First and Second World War," he explained.
The medals were recovered on May 14 when police executed a search warrant by entering a suite at 1041 Comox St.
After finding the medals, a Vancouver police officer who is familiar with military matters, Rob Roy MacKenzie, helped track the history of the medals, which led police to contact Bell-Irving's surviving son and daughter.
Aeneas Bell-Irving was born in 1897 and was active first during World War One.
"The only story I remember from that period is that (my father) was an observer in balloons that were attached to the ground by cables that went up in the air," Darg Bell-Irving said.
"If you are in the air and you have something going to the ground, you have an incredible feeling of the height."
Following the war, his father worked in China for 10 years before returning to Vancouver in 1929. He later returned to military service in 1939 working as a commanding officer, "protecting England from German planes," Darg Bell-Irving said.
Aeneas Bell-Irving was a brigadier when he retired. He returned to Vancouver in 1945 where he passed away in November 1966. He was the uncle of former B.C. lieutenant governor Henry Pybus Bell-Irving.
His surviving son and daughter are now trying to decide what to do with the medals.
Note - Brigadier (ret) Aeneas E. McBean Bell-Irving OBE ED was appointed Honorary Colonel of 15th Field Regiment, RCA in 1957.
Back to 2008