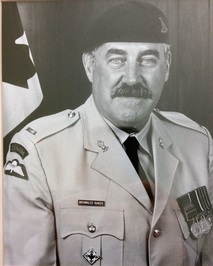 15th Field Artillery Regiment RCA
Honourary Colonel John Brownlee-Baker was born in Malvern, England, and was educated at Leominster Grammar School and Malvern Chase County High School.
After leaving school in 1958 Honourary Colonel Brownlee-Baker enlisted in the Royal Artillery as a Boy soldier.  He mustered to the colours from the Junior Leaders Regiment as Junior Regimental Sergeant Major in 1960 when he was posted to 3rd Regiment Royal Horse Artillery as a gun number.  The next 14 years saw his rapid promotion through the ranks until, in 1974, he was promoted to WO1 and appointed Regimental Sergeant Major of 19 Field Regiment, Royal Artillery at 32, becoming the youngest Gunner Regimental Sergeant Major since World War 2.  Two years later he was posted to the Royal School of Artillery as Garrison Sergeant-Major.  In 1978 he left the British Army.
During his 20 years with the Royal Horse Artillery and the Royal Artillery he saw service in North and East Africa, Middle and Far East, Rhine Army, both southern and northern flanks of NATO, and in the United Kingdom.  He was awarded his Long Service Medal in 1976 and holds bars to the General Service Medal for Radfan, South Arabia and Northern Ireland.  He was awarded the Commander in Chief’s Commendation during operations in the Radfan Mountains in 1964.
On leaving the British Army, Honourary Colonel Brownlee-Baker returned to college and obtained his diploma in Industrial Engineering.  He emigrated to Canada in 1979 and, after a short break from soldiering, he joined the 15th Field Artillery Regiment, RCA as a Master Warrant Officer in 1981.  A move to Ontario saw him transfer to 10 Field Battery in St. Catharines, and his commission to the rank of Captain as a Troop Commander.
In 1983 he returned to Vancouver and 15th Field Artillery Regiment, RCA.  During his service with the Regiment he has held the positions of Troop Commander, BK, Adjutant and BC of both 31 and 68 Batteries.  Honourary Colonel Brownlee-Baker assumed command of the 15th Field Artillery Regiment in 1991, a position he held until 1996.  He was appointed Honourary Colonel in April 2004.
Throughout his military career he has completed numerous courses at the following military establishments: Royal School of Artillery; School of Infantry; Jungle Warfare School, Singapore; British and German Airborne Schools; CTC Royal Marines; CFB Gagetown; CFB Shilo; and Fort Frontenac.
A long time North Shore resident Honourary Colonel Brownlee-Baker is a lecturer with the School of Business at Capilano University.  He is also a mentor in the Leaders of Tomorrow program at the Vancouver Board of Trade.  Honourary Colonel Brownlee-Baker holds a Bachelor degree in Business Administration from Simon Fraser University and an MBA in International Management from the Asia-Pacific Graduate School of Management.
Back to 2004
Copyright © 2015, 2016, 2017, 2018, 2019, 2020, 2021
Webmaster/editor - Leon Jensen, OMM, CD, Commanding Officer 1998-2001, Regimental Sergeant Major 1986-1988
Additional photos and stories as well as comments regarding errors and omissions would be greatly appreciated. ​
​Have I inadvertently placed personal information of yours on line that you don't approve of?
​Please accept my apologies and contact me at president.vcrgunners@gmail.com and I’ll have it removed.