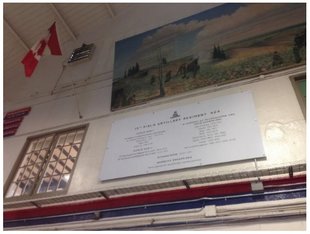 By Sergeant Donato Calogero CD
It was announced in this publication after Canada’s mission to Afghanistan ended in 2014 that British Columbia Infantry and Armoured units would be receiving Theatre Honours.  For the Artillery, Engineers and the Special Operations Regiment, their service in Afghanistan would be acknowledged in their shared motto ‘UBIQUE’.  Although the colours (Guns) and ‘UBIQUE’ reflect the common history of The Royal Regiment of Canadian Artillery, I felt that the soldiers and 15th Field were not being fully recognized for their long service in that country which went from 2004-2013.  In the spring of 2014, I approached the Commanding Officer, LCol Brent Purcell CD AdeC, with a historical project that would not only display our service to that mission but also present our service since 1920.  An ‘HONOURS SHIELD’ that would proudly show all the Regiment’s service on the west wall of the armoury overlooking the parade square.  It would not just recognize the service of our members to Afghanistan but also service in the Second World War, Peacekeeping Operations, NATO Operations and Domestic Operations.  It would be a clear record that would allow visiting family members, friends of the Regiment, guests and members of other units to see our service to Canada in a glance.
The project started with a visit to the museum followed by historical research.  As part of the process, a preliminary paper Honours Shield was put out for display for members to view, comment on and discuss for over a year.  With museum support from MGen McDonald CMM CD (ret’d) and John Redmond, the missions and dates were verified as correct.  Bdr Albert Law, a photographer and graphic designer, was hired to produce a visually appropriate design.  After many revisions and edits, the final design was ready.  Now, how to fund and mount a 10 x 5 foot aluminum sign?  After getting four initial quotes for tender, one stood out and received the contract.  The 15th Field Regimental Society stood up and funded brushed aluminum standoffs that would bring the Honours Shield off the wall.  On Wednesday, September 28th, the Shield was installed.  It should be clear that it was the Commanding Officer’s vision and steadfastness, through a process that lasted two and a half years, that the project came to a successful and fulfilling end.  The Honours Shield can be viewed from the parade square.  It is on the west wall above the clock.
Back to 2016
Copyright © 2015, 2016, 2017, 2018, 2019, 2020, 2021
Webmaster/editor - Leon Jensen, OMM, CD, Commanding Officer 1998-2001, Regimental Sergeant Major 1986-1988
Additional photos and stories as well as comments regarding errors and omissions would be greatly appreciated. ​
​Have I inadvertently placed personal information of yours on line that you don't approve of?
​Please accept my apologies and contact me at president.vcrgunners@gmail.com and I’ll have it removed.