VANCOUVER GUNNERS
MILCON 90
(or did we call it On Guard 90? or was it Oh God 90?)
It's not often that we have a complete Militia Regiment deployed for a summer concentration. Here's eighteen guns with representatives from 5 (BC) Bty to 116 Ind Bty lined up in the field in Wainwright. It appears that Lieutenant-Colonel John Carter is running off to a meeting after talking with the Regimental Sergeant Major Master Warrant Officer Dave Levien.
There's a lot of vehicles when you get an entire regiment lined up ready to move.
Here's a great shot of the Battery. Big problem is the focus isn't too sharp. I can only make out one person. Captain Jensen on the far right. Are you there?
The Battery vehicle lines getting ready to move out under somewhat threatening skies.
Was this your gun detachment?
Sergeant Donato Calogero's detachment with Bombardier Campbell as #2.
Master Bombardier Kevin Rankin's detachment with Gunner Rick Tennant as #2.
Assistant Instructor in Gunnery (AckIG) is Warrant Officer Ron Benoit who eventually was appointed Regimental Sergeant Major of the Battle School in Shilo before commissioning as a Captain. Sergeant Lewis from 5th (BC) Field Battery RCA.
It's a long convoy to the railhead.
Not every vehicle went by rail. There were those that held up traffic all along the Trans-Canada . The complete exercise On Guard 90 included a longer Regular Force Brigade training event augmented by Reserve members. Bombardier Darren Kostinuk spent several weeks there and remembers that the weather was so terrible that half the Brigade seemed to be down with hypothermia at one stage. 1st Regiment Royal Canadian Horses Artillery was there with some of our members as augmentees. 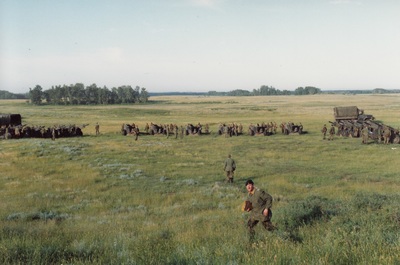 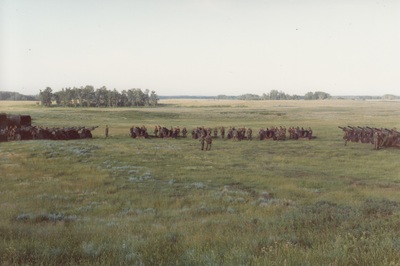 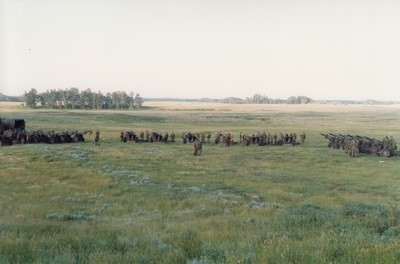 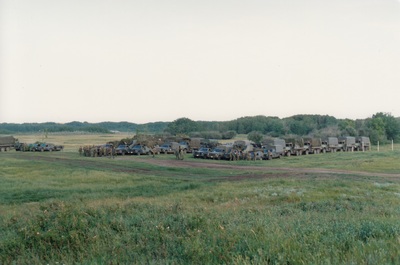 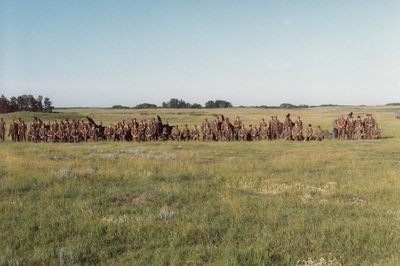 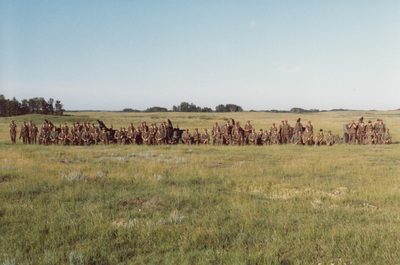 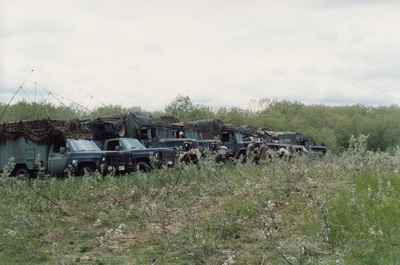 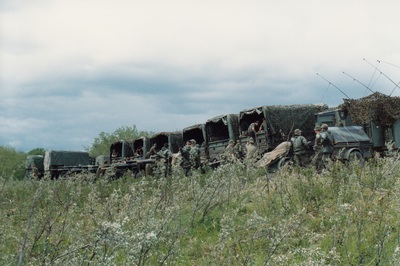 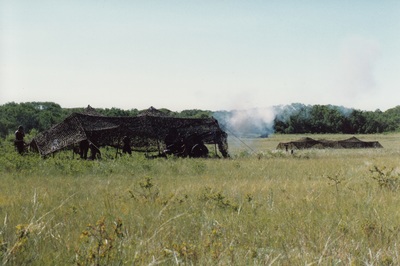 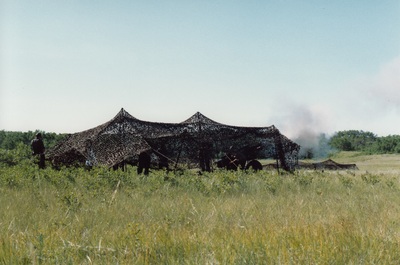 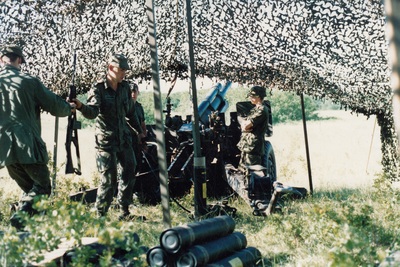 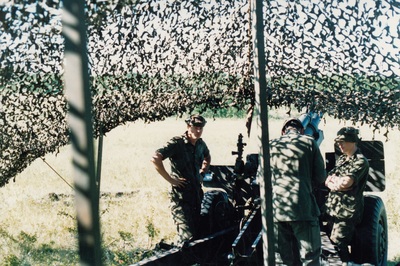 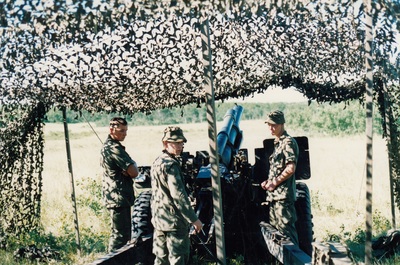 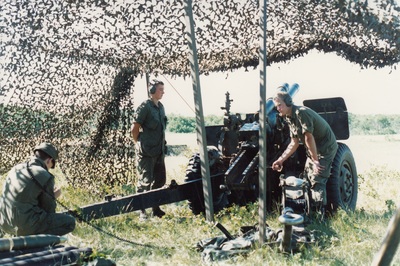 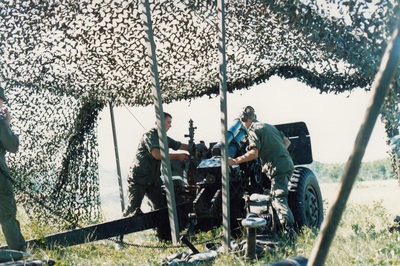 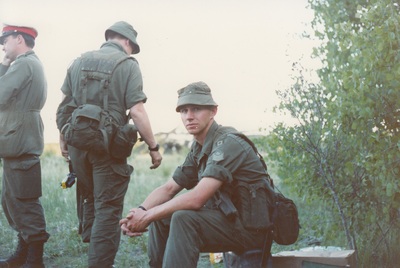 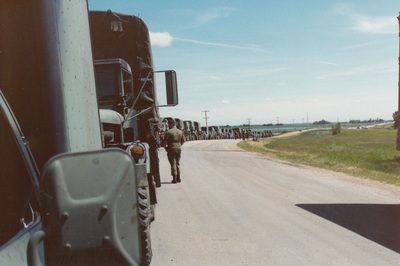 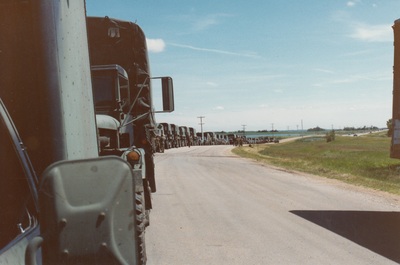 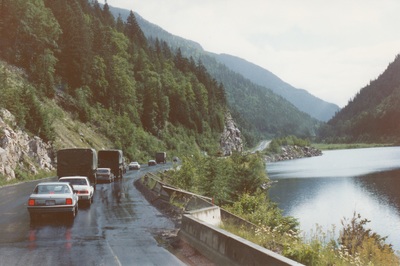 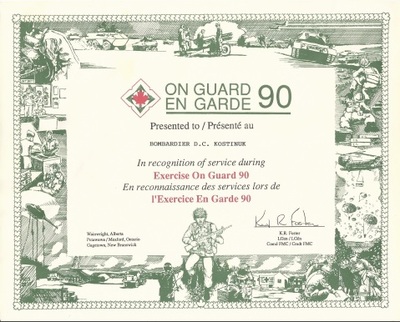 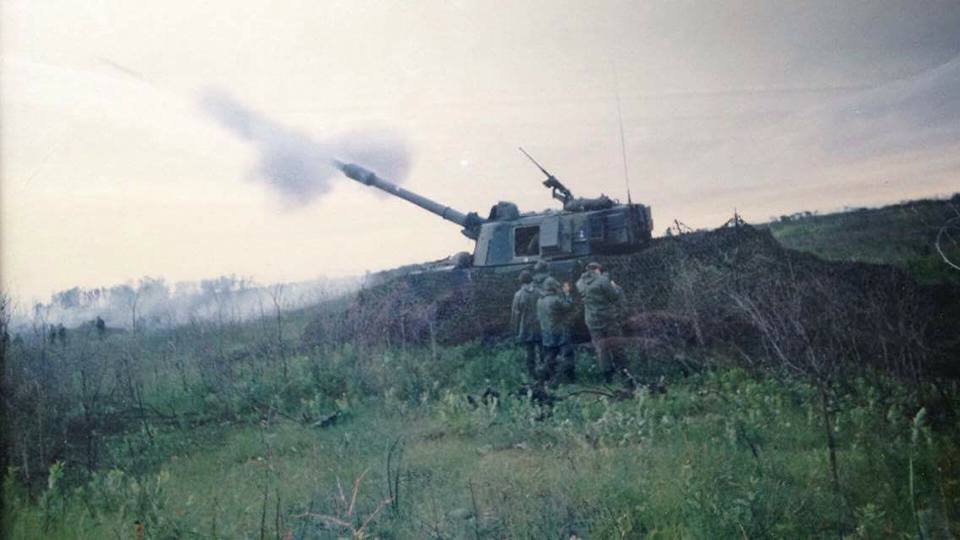 These photos were provided by Gunner Dolan Magrath. 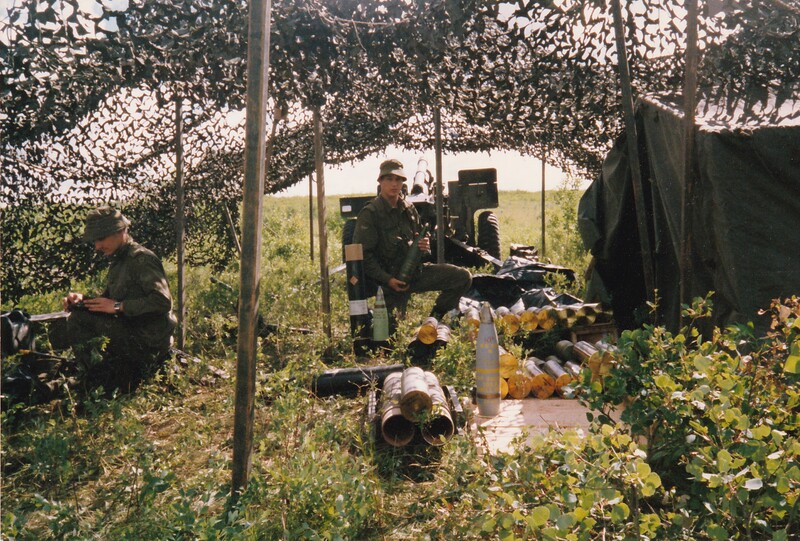 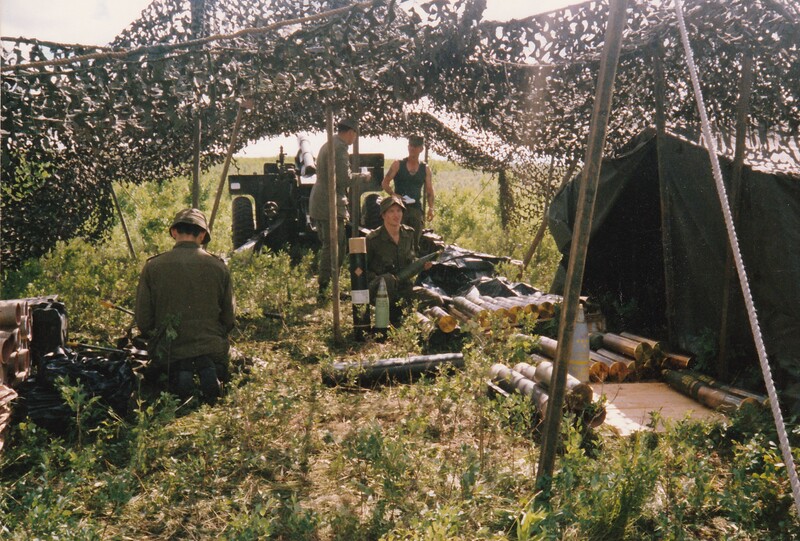 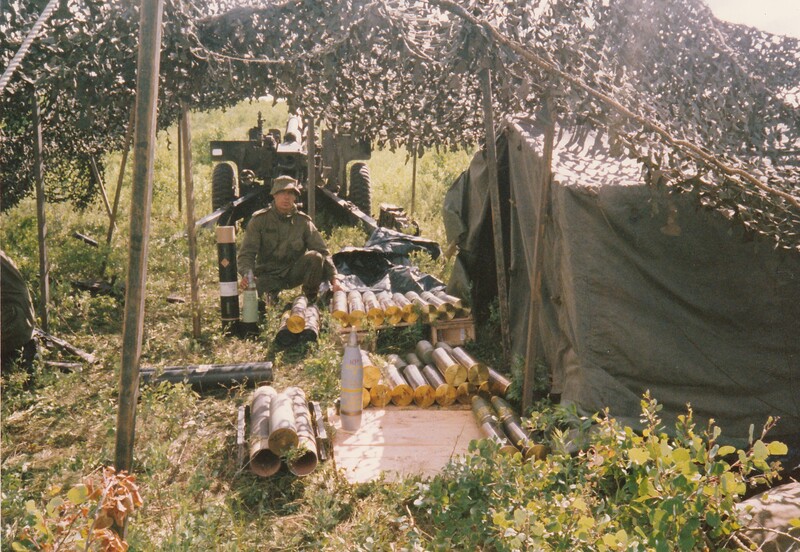 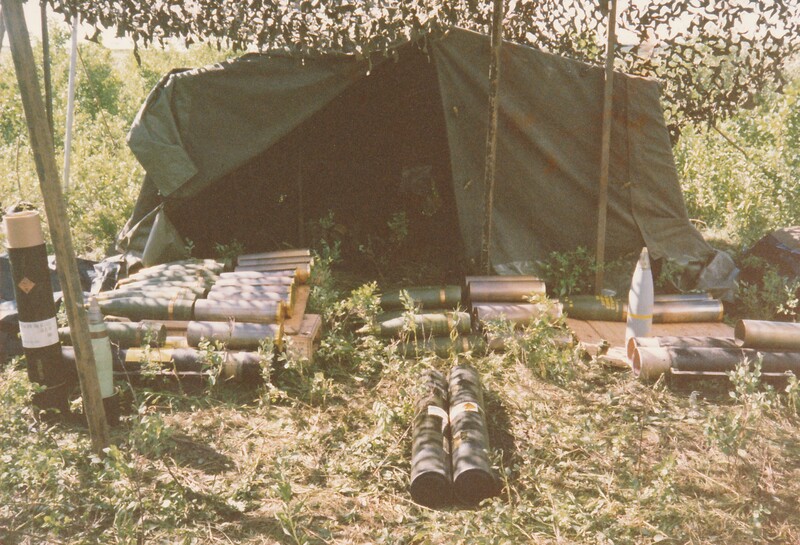 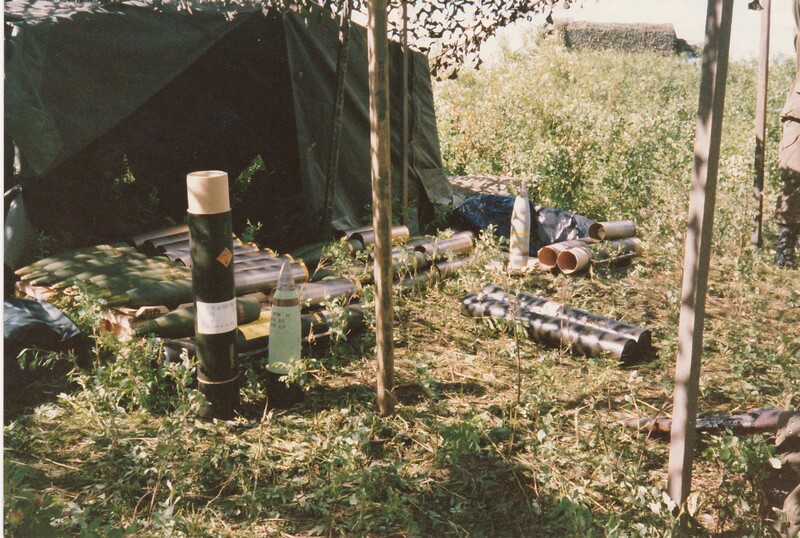 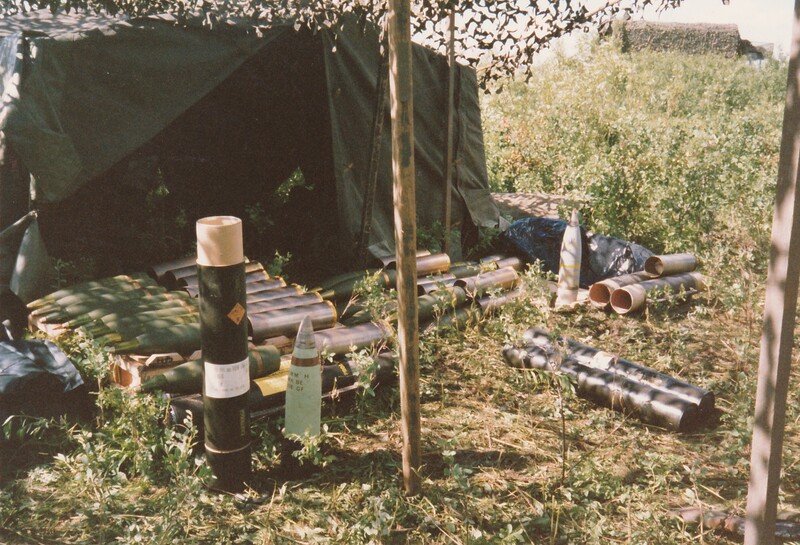 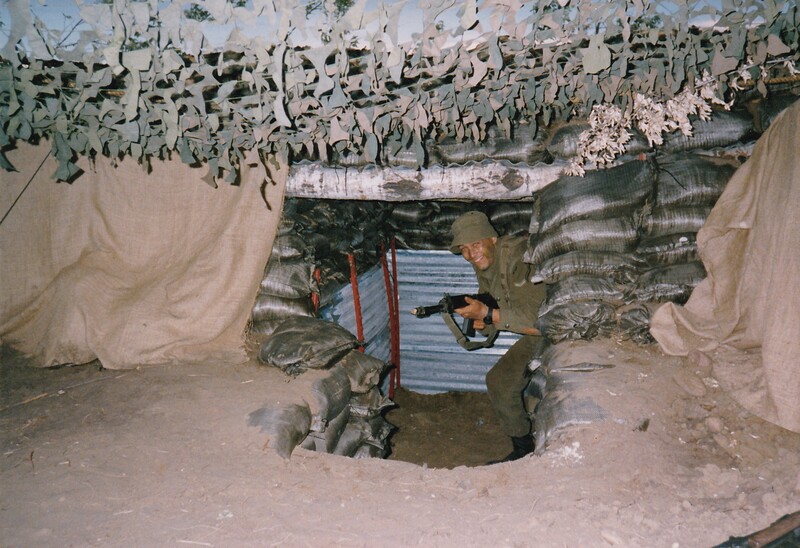 Back to 1990
Copyright © 2015, 2016, 2017, 2018, 2019, 2020, 2021
Webmaster/editor - Leon Jensen, OMM, CD, Commanding Officer 1998-2001, Regimental Sergeant Major 1986-1988
Additional photos and stories as well as comments regarding errors and omissions would be greatly appreciated. ​
​Have I inadvertently placed personal information of yours on line that you don't approve of?
​Please accept my apologies and contact me at president.vcrgunners@gmail.com and I’ll have it removed.