Sergeant Benjamin Harrison Bell
Hold Rites Today for B.H. Bell, 54
Bell Telephone Construction Superintendent Dies After Brief Illness
The funeral will be held at noon today from D.A. Collins chapel, Sherbrooke street west, of Benjamin Harrison Bell, division construction superintendent in Montreal of The Bell Telephone Company of Canada, who died suddenly on Monday night. Mr. Bell was convalescing after a short illness when he had a sudden relapse. He was in his 55th year. Internment will be at Freleighsburg, Quebec.
Born in Freleighsburg, he was educated in the Eastern Townships. Before joining the Bell Company, in 1908, in Montreal, as an apprentice linesman, he played semi-professional hockey.
Within three months after joining the telephone company, he was a full-fledged lineman. Eighteen months later he was made sub-foreman and then successively records clerk, pole inspector and foreman. In 1915, he was transferred to Ottawa, and after being appointed construction foreman there, he obtained leave of absence for war service.
Joining the 51st Battery, Canadian Field Artillery in Ottawa as a signaller, he proceeded to France where he was wounded. After convalescing in England he volunteered for service with the North Russia Expeditionary Force and went to Archangel with the 68th Battery, R.C.A., as a sergeant.
On his return to Bell Company in July 1919, he was made construction foreman and later installation foreman. He returned to Montreal in November 1922 as assist field engineer and was successively field engineer, district engineer, outside plant engineer and construction supervisor before his appointment in 1929 as construction superintendent of the Montreal division.
He is survived by his wife, Elizabeth McPherson and two daughters, Marjorie and Dorothy.

Flying Officer Lionel Edmond Charles Gagnon
A former Sergeant in the 15th Field Brigade, Canadian Artillery died in a flight training accident at Bagotville, Quebec on 16 February 1943. He was piloting a Hurricane which was in a mid air collision with a second Hurricane during a practice dogfight. Both aircraft were destroyed and both pilots were killed.
​He was survived by his wife, Mavis Cecile Gagnon and Mother, Rose de Lima Gagnon, of Vancouver.
Flying Officer Gagnon joined the 68th Battery, 15th Field Brigade, CA in 1932. He was a Sergeant in 15th Field Brigade, RCA from 1937 to 1939 before transferring to the  9th Ant-Aircraft Battery, 1st Anti-Aircraft Regiment, RCA in 1939 and then the Royal Canadian Air Force in 1940. 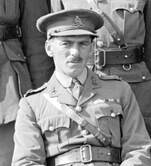 Gunner Charles Burton Watson
Funeral services for a well-known city, clothier, Charles Burton Watson, 56, of 2046 Beach, who died in General Hospital Tuesday, were held today in Mount Pleasant Chapel with Canon Harold G. King officiating.
Born in Calgary, he came to Vancouver 38 years ago. At one time he was a partner in the firm of Kerfoot and Watson, clothiers on Hastings. In recent years he has been associated with Charles Claman Ltd.
Surviving are his wife; two sons, Lieut. Chas. B., and Kenneth D, and two brothers, T. M. and George. The remains were cremated.
Gunner Watson enlisted with the 68th Overseas Depot Field Battery as a Gunner on 1 March 1916. He served overseas in England, however a bout of chronic bronchitis prevented him from serving in France and Belgium and he was invalided home.

Battery Sergeant Major Henry Witcombe
On July 2, 1943, of 2851 Selma Avenue, Burnaby, aged 67 years. Survived by his wife, Ada. Funeral service Monday, July 5, at 2 p.m., from Central Park Funeral Home, to Ocean View Burial Park. Cremation. Rev. H. Pearson officiating. No flowers, by request.
Battery Sergeant Major Witcombe enlisted with the Vancouver Volunteer Reserve, Boorman's Battery on 9 July 1915. Due to his previous service as Instructor with the Royal Garrison Artillery, he was promoted Sergeant and transferred to Canadian School of Gunnery as Battery Sergeant Major. He subsequently reverted to Gunner's rank and served in 40th Battery, 10th Brigade, Canadian Field Artillery in France and Belgium.
Back to 1943
Copyright © 2015, 2016, 2017, 2018, 2019, 2020, 2021
Webmaster/editor - Leon Jensen, OMM, CD, Commanding Officer 1998-2001, Regimental Sergeant Major 1986-1988
Additional photos and stories as well as comments regarding errors and omissions would be greatly appreciated. ​
​Have I inadvertently placed personal information of yours on line that you don't approve of?
​Please accept my apologies and contact me at president.vcrgunners@gmail.com and I’ll have it removed.