VANCOUVER GUNNERS
Obituaries
Gunner Guelph Austin Barnard
Guelph Austin Barnard, 50, of 138 Arlington St., died suddenly Sunday in the Misericordia Hospital. He was a retail merchant and proprietor of the United Grocer and Meat Market, Arlington and Westminster Ave., for the past 20 years. Born in Owen Sound, Ont., Mr. Barnard had been a resident of Winnipeg for the past 48 years. He served overseas in the First World War during 1916 to 1918, in France, Belgium and Germany with the Canadian Field Artillery, as a Corporal.
Mr. Barnard was very prominent in the Masonic Circles, and was a member of King Edward Lodge 93, A.F. and A.M., the Sons of Canada Lodge, Valour Road Legion and the Winnipeg Caterers’ Association.
He is survived by his widow, Olive Gertrude; two daughters, Barbara and Thelma, both at home; a son, Warren, at home; his mother, Mrs. Lydia Barnard, Toronto; two sisters, Hazel, North Collins, N.Y.; Mrs. W. J. Usher, Jr., Toronto.
Funeral service will be held at 4 p.m. Wednesday in Gardiner’s Funeral Chapel. Burial will be in St. John’s Cemetery. Rev. Irving R. Jones, Holy Trinity Church, will officiate.
Gunner Barnard enlisted with 59th Battery, 15th Brigade, Canadian Field Artillery 7 March 1916 and served with them until the unit was absorbed by the 61st Battery, 14th Brigade, Canadian Field Artillery.

Bombardier Cyril Joseph Zachariah Burchell
ON March 25 Mr. Cyril Burchell of 10922 80 Ave., passed away at the age of 51 years. He leaves to mourn his loving wife, 2 daughters and one son, John Donald, Ann and Rosemary, all at home, 3 brothers, Charles and Robert in Sydney Mines, Nova Scotia, Peter in Halifax, one sister Mrs. J.A. Gillis of Sydney Mines pre-deceased him in October, 1946. The deceased was a member of the Knights of Columbus, Edmonton Council, No. 1184. The funeral will be held Thursday morning at 9:30 from Connelly-McKinley’s Funeral Home to St. Anthony’s Pro-Cathedral where services will be held at 10 o’clock. Rev. C.J. Foran, D.D. will officiate and internment will take place in the family plot in the Edmonton Catholic Cemetery. Prayers will be held Wednesday evening at 8:15 for parishioners, 8:30 for members of the Catholic Women’s League and at 8:45 for members of the the Knights of Columbus. Connelly-McKinley Ltd.
Bombardier Burchell enlisted on 9 March 1916 and served with the Trench Mortar Batteries in France and the 68th Battery, 16th Brigade, Canadian Field Artillery in Northern Russia. 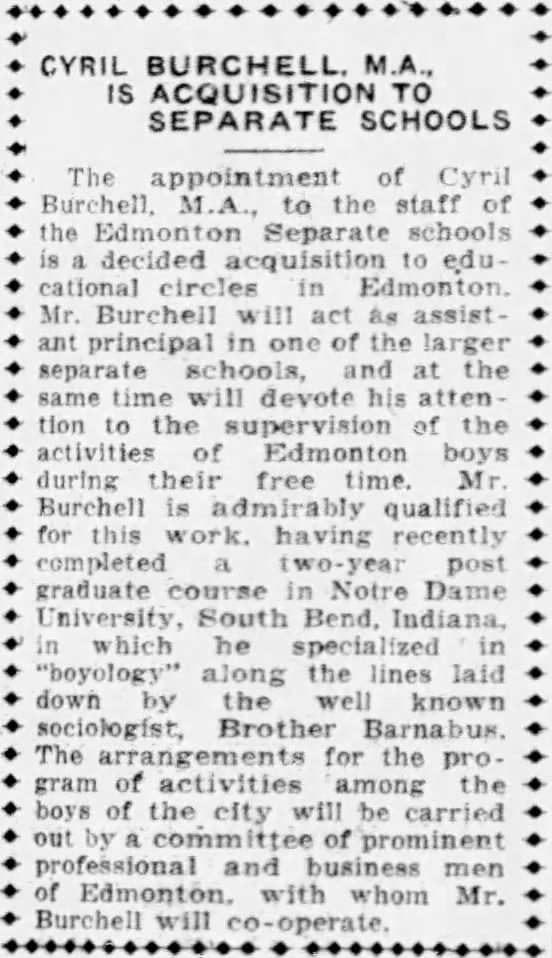 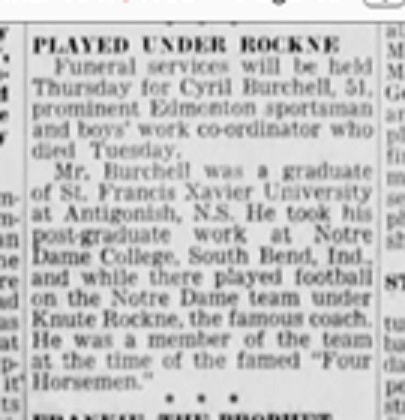 Lieutenant Basil Gawler Prior
Basil G. Prior called by death in North Van
North Vancouver – Funeral of Basil G. Prior, 64, son of B.C.’s fifteenth Lieutenant-Governor, the late Lt.-Col. E.G. Prior, will be held at 2 p.m. Tuesday from the Burrard Chapel of Centre and Hanna.
Mr. Prior, who lived at 114½ West Esplanade, North Vancouver, died Friday. Born in Victoria, he had been a resident here for 20 years. He was a member of Lodge 43, BPOE and of the Army and Navy Veterans in Canada.
Mr. Prior is survived by a daughter, Mrs. Gerald Guinn, Seattle, and three sisters, Mrs. P.S. Lampan and Mrs. F.G. Hood, both of Victoria, and Mrs. J. Watson, England.
Rev. John Leigh will officiate at funeral services. Burial will be in North Vancouver Cemetery.
Lieutenant Prior served briefly with 58th Battery, 15th Brigade, Canadian Field Artillery in England.
Back to 1947
Copyright © 2015, 2016, 2017, 2018, 2019, 2020, 2021
Webmaster/editor - Leon Jensen, OMM, CD, Commanding Officer 1998-2001, Regimental Sergeant Major 1986-1988
Additional photos and stories as well as comments regarding errors and omissions would be greatly appreciated. ​
​Have I inadvertently placed personal information of yours on line that you don't approve of?
​Please accept my apologies and contact me at president.vcrgunners@gmail.com and I’ll have it removed.