VANCOUVER GUNNERS
Obituaries - 1993
Reverend Charles Bishop
Beloved priest, husband, father, grandfather and friend to all, passed away peacefully on February 2, 1993 in White Rock, B.C.
Your love and prayers will be greatly appreciated, in lieu of flowers and donations. A Memorial Service will be held at Holy Trinity Anglican Church, White Rock, B.C., at 2:00 p.m. on Friday, February 5, 1993.
Reverend Bishop was the padre for 15th Field Regiment, RCA in 1956. 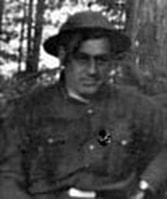 ​Captain Benjamin Franklin (B.F.) Brown
WW 1 Vet passes. A long-time Langley resident, passed away peacefully on Sunday, July 11, 1993 in Langley, in his 94th year. B.F. was born at Sommerset, Iowa on May 21st, 1897. The family came to Canada in 1913. He served four years in the First World War, seeing duty in France and Russia. B.F. also served with the 40th Field Artillery Reserve Regiment in Regina, Sask. During the Second World War, with the rank of Captain.
After the First World War, he farmed at Creelman, Sask. Until 1930.  B.F. then moved to Regina, where he started Brown’s Auction, which is still operating today, in 1933. He worked many summers with Municipal Hall, adjusting crops.
B.F. moved to Langley in the late 50’s, where he was involved in the mobile home industry.
He had a tremendous interest in animals, training calves, mules, goats, oxen, and ponies during his lifetime.
B.F. played an active role in local parades, particularly the Fort Langley, Aldergrove, and Cloverdale parades, where he would have as many as three or four floats on occasion. He also trained a team of oxen, which he took to Saskatoon, pulling a covered wagon in the Sask. Chimo parade there. B.F. was a past member of Rotary International, and was on The Executive Association of Regina’s Exhibition Board, serving on various committees. He was a member of the Royal Canadian Legion, and was one of the first auctioneers to be elected to the Saskatchewan Auctioneers Hall of Fame, in North Battleford.
B.F. is survived by his sons; Murray and wife Mary, of Saginaw, Texas; Vernon and wife Joan, of Moose Jaw, Sask.; Clarence and wife Jackie, of Regina, Sask.; and Roy and wife Bette of Cloverdale. He is also survived by one brother, Fred and wife Mary, of Heber Springs, Arkansas and by 18 grandchildren and 28 great-grandchildren.
He was predeceased by his parents Fred and Elnora, sisters Lucille, Lois, Mabel, Bernice and brothers William, Paul and Carrol, his son Frank, along with his first wife Elvira Jane (Thomson) and his second wife Jessie (Kay).
A memorial service will be held at 1:30 p.m. on Friday, July 16th, at United Church, 5673 – 200th St., Langley. A gathering will be held following the service at The Royal Canadian Legion Branch 21, Langley.
Cremation will take place. A private family graveside service will be held at a later date in Carlyle, Iowa.
Flowers are most gratefully declined. Friends may make donations in remembrance to North Langley Community Church Building Fund, or to a charity of their choice.

Gunner David Donaldson
David passed away peacefully on March 4, 1993. Born April 23, 1901. Predeceased by his wife, Winnifred Eveline. Survived by son, Gary (Pat); daughters, Joyce Kilshaw and Betty Tweedhope; six grandchildren and 10 great-grandchildren, and sister, Winnie.
Funeral service to be held at Sands Funeral Chapel, 1803 Quadra Street, on Monday, March 8, at 1:00 p.m., with Lloyd Glover officiating. Cremation. Flowers gratefully declined. Donations may be made to the B.C. Lung Association, 1902 Fort Street, Victoria, V8R 1J7. The family wish to express their many thanks to Gorge Road Hospital for their care.
Gunner Donaldson was  taken on strength with the 62nd Battery, 15th Brigade, Canadian Field Artillery 15 May 1916.

Major Douglas (Red) Blair Harrison
Passed away on February 21, 1993 in Vancouver. He is survived by his sister Pat Phillips of Vancouver and brother Jim Tierney of Cumberland B.C. Doug was born June 28, 1929 in Michel, B.C. and attended UBC before joining the Canadian Army. He served in the Royal Regiment of Canadian Artillery and retired as a Major in Vancouver. He served in several artillery units and staff positions in Canada and well as in Germany and the United States. He was also a peacekeeper in the Middle East in the 1970's and 1980's he was posted to Vancouver's 15th Field Artillery Regiment and to the Area Headquarters.

Lieutenant Warren Douglas Wellwood
Of Cloverdale passed away peacefully September 5, 1993 at Surrey Memorial Hospital. Born January 14, 1915 in Ottawa he is survived by his wife Glenys, 2 sisters Mary Summerville and Evelyn Burgess, 4 children Doug, Ron, Dora Hunter and Gord, their spouses, 10 grandchildren and 5 great-grandchildren. He was predeceased by his first wife Dorothy. Warren completed high school in Vancouver, served in the Canadian Artillery during the war, pursued a number of business ventures in the Nanaimo Ladysmith area and spent the last twenty years in the Surrey Cloverdale area. A memorial service will be held on September 8 at 11:00 a.m. at Henderson’s Funeral Home at 5772 176 St. Cloverdale. In lieu of flowers donations may be made to the Heart and Stroke Foundation.
Lieutenant Wellwood was a member of 31st Heavy Battery, 15th (Vancouver) Brigade, RCA in 1942.
Back to 1993
Copyright © 2015, 2016, 2017, 2018, 2019, 2020, 2021
Webmaster/editor - Leon Jensen, OMM, CD, Commanding Officer 1998-2001, Regimental Sergeant Major 1986-1988
Additional photos and stories as well as comments regarding errors and omissions would be greatly appreciated. ​
​Have I inadvertently placed personal information of yours on line that you don't approve of?
​Please accept my apologies and contact me at president.vcrgunners@gmail.com and I’ll have it removed.