Lieutenant-Colonel Barrie Hamilton CD
Barrie Hamilton: church and community worker Barrie Hamilton, 73, of St. David's, Tsawwassen, active in diocesan, church and community affairs, died February 26 in Delta. He was the husband of Diocesan Council member Phoebe Hamilton.
Born in Vancouver, he engaged in a military career from which he retired as a Lt. Colonel. In British Columbia he worked for the CP and PGE railways and with West Fraser Timber as a transportation specialist. He was part of the original "Livable Region" Committee, which led to the establishment of more effective regional government in the Vancouver area.
He was 50-year member of the Masons, a Scout leader, and in retirement spent many hours at Mission to Seafarers at Roberts Bank, and was active at Sorrento Centre.
He leaves four children, a granddaughter, two sisters, and his wife. The funeral took place at St. David's on March 5 with the Rev. Paul Woehrle officiating.

Major Robert John Patterson Foulis CD   Passed away September 23, 2005 travelling in France with his beloved wife, Barbara. Bob was born in Quesnel, BC on May 18th, 1938 and was predeceased by his parents, Bob and Louise Foulis. Bob and Barbara were married for 30 wonderful years. Bob is survived by his wife Barbara, sister-in-law Roslyn Hoad, brothers-in-law Larry Hoad and Mike Lane, sister Cheryl (George) Leukefeld, niece Lisa (David) Pick, niece Monika Leukefeld, nephew Darren (Helen) Leukefeld, brother Fergie Foulis, niece Laura (Greg) Reaney, niece Katharine (Kevin) Creery, nephew Matthew (Laurie) Foulis, sister Allyson Foulis, sister Bernice Foulis and nephew Justin Foulis, 2 great-nephews Carter and Kashden and great-niece Rozina. Bob was a kind, generous and gentle man who enjoyed life with his family, friends, military colleagues and his church family and will be greatly missed by all and especially by his wife Barbara. Bob was a Presbyterian Minister, Social Worker and a Chaplain in The Canadian Army Reserves. He was Ordained as a Presbyterian Minister and his church was Whalley Presbyterian Church. He joined The Army Reserves as a Chaplain to 3 Regiments (New Westminster Regiment, British Columbia Regiment, The 15th Field Regiment) and retired as a Major. Bob went back to University and got his Masters Of Social Work at UBC in 1972. His working career included positions at Colony Farm, Riverview, Forensic Clinic, Vancouver, UBC Psychiatry Dept, Richmond Public Health, Delta Mental Health Clinic and Whalley Mental Health Clinic. He retired from Mental Health in August, 2001. The Memorial Service And Celebration of Bob's Life will be at 2:00 p.m. October 6, 2005, at Knox Presbyterian Church, 403 East Columbia, New Westminster, BC with a Tea to Follow. In lieu of flowers please donate to The Canadian Diabetes Society. 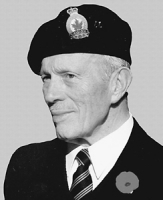 Major Thomas Desmond Eckford  With heavy hearts we would like to announce that Thomas Desmond Eckford slipped from this world peacefully on the morning of April 18, 2005. Born October 20th, 1915 in Eckville, Alberta (homesteaded and named after his father) to Eva and Arthur Eckford. Tom with his parents and brothers Arthur Edward (Ted) and Dermott (Derm) moved to North Vancouver in 1920. Tom's spirit has always been connected with both the mountains and the sea. He got an early start through The Boy Scouts of Canada (King Scout) and Rovers. He hiked and skied the North Shore Mountains with friends and family throughout his life. He was also involved with the Grouse Mountain Ski Club and the Alpine Club of Canada, which he belonged to for most of his life. He was a founding member and early commodore of the North Vancouver Yacht Club (1935-1939) and later a founding member of the West Vancouver Yacht Club. His boats were the Jolly Roger, the Sumallo, the Gypsy Queen, the Ailsa I, and the Jackpot. He was actively involved in both clubs in their racing and cruising programs and many other club activities including holding various executive positions. During World War II he served in the 43rd and 75th Regiments and following the war in the 15th Field Artillery (Militia) retiring with the rank of Major. He was a veteran who was decorated for his actions in France, Belgium, Holland and Germany. In 1995 he returned to Holland for the 50th Anniversary of the liberation of Holland. Tom worked at the Hudson's Bay Company for ten years prior to the war and continued there until he retired in 1981. At retirement he was a department manager and head staples (linens) buyer for Canada. In 1948 he married Margaret Jean White. They lived briefly in North Vancouver, and Victoria, returning to West Vancouver in 1954 where they lived for the remainder of their lives. In retirement he continued working in various capacities and was a member and Chair of the Board of Variance in West Vancouver for seven years. Predeceased by his wife Margaret, he was a loyal companion to her in her final days last summer. He is also predeceased by his brothers Ted and Derm. He is survived by his sons Will (Leah) Eckford and their daughter Eve, and by Gerry (Colette Parsons) Eckford. Throughout his long life, Tom was always loyal, fair, strong, considerate, and a true gentleman. Tom was a leader, a guide, and a role model for the generation of children that followed and so admired him. The family wishes to acknowledge the wonderful friends who shared his life. Those who have passed before him and those who carry on without him. Our loss is great. A tribute and reception will be held in Tom's honor at the West Vancouver Yacht Club on Thursday, April 28th between 4-6pm. - See more at: http://www.legacy.com/obituaries/vancouversun/obituary.aspx?n=thomas-desmmond-eckford&pid=3459760#sthash.KXGu0EWg.dpuf 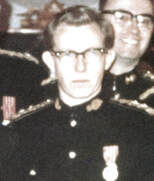 Lieutenant David Vincer Upton
January 3, 1940 – June 2, 2005
It is with heavy hearts that we announce the passing of an amazing husband, incredible dad, loving papa, dedicated brother, friend and avid golfer. David is survived by wife and best friend, Bernice; sons, Jeff (Lesley, Spencer and Jakob); Greg (Julie, Mackenzie and Mason); sister, Dianne; brother in law Jim (Noreen) and many friends and relatives. A memorial service will be held at Saint Cuthbert’s Anglican Church, 116 Street and 82nd Avenue, North Delta on Monday, June 6 at 1:00 pm. In lieu of flowers, donations to the Canadian Cancer Society would be appreciated.

Back to 2005
Copyright © 2015, 2016, 2017, 2018, 2019, 2020, 2021
Webmaster/editor - Leon Jensen, OMM, CD, Commanding Officer 1998-2001, Regimental Sergeant Major 1986-1988
Additional photos and stories as well as comments regarding errors and omissions would be greatly appreciated. ​
​Have I inadvertently placed personal information of yours on line that you don't approve of?
​Please accept my apologies and contact me at president.vcrgunners@gmail.com and I’ll have it removed.