VANCOUVER GUNNERS
Obituaries - 2012
Lieutenant David Francis Bruce
May 16, 1915 – November 20, 2012 – It is with much sadness that we announce the passing of our beloved David Bruce at 97 years. David was predeceased by his daughter Colleen (Fred), grandson Paul; his siblings, George (Lillian) and Alice (Harold). He is survived by his loving wife of 69 years , Marney; daughter Brenna (David), grandchildren Karl (Lara), Jeffrey, Shannon (Dan), Marnie and Bruce; great-grandchildren Anya and Ryder. David lived all his life in Burnaby, except during WWII. By war’s end, he was a lieutenant, Royal Canadian Artillery. After the war, he supervised shipping and receiving for Cemco Electrical which later became Federal Pioneer. He loved to garden, fish, read, and work with wood. He was a long-time member of the Burnaby Fish and Game Club. A celebration of his life will take place on Saturday, December 8, at 1:00 p.m. at Gordon Presbyterian Church, 7457 Edmonds, in Burnaby.

Bernard (Bernie) Merle Smith
February 28, 1923 - November 14, 2012
Bernie passed away on November 14, 2012 after a courageous battle with cancer. He is predeceased by his loving wife of 64 years Mary, his brother Louis and his first grandchild Tanya. He is survived by his children, Lawrence (Janice), Jo- Ann (Chris), Martha (Leif), Elizabeth, nine grandchildren and five great-grandchildren. His family is truly proud of him and all that he accomplished. Bernie's life was well spent serving his country and his community, loving his family and embracing people of all walks of life. He truly loved every minute of his career in the Vancouver Police Department. He made lifelong friends of the men and women of the department and many others whom he encountered on his tours of duty. He cared for the helpless and those that were in need and was determined to ensure law and order were in place where he worked and lived. Over the years he had many exciting assignments but he was very passionate about the Downtown East Side. After 34 years of service, Bernie retired and went on to enjoy many other adventures including security work, a run at politics and writing children's books. No matter how long he was away from the VPD, the department was always dear to his heart. He remained connected with the department until the end. Bernie's other true love was his family. He would do anything to ensure his family was intact, safe and protected. The family wants to acknowledge all of Bernie's special friends and thank them for "being there." They also want to thank the staff at the Vancouver Cancer Clinic and George Derby Hospital for their kindness and care. Please join us as we Celebrate Bernie's Life on Monday, November 26, 2012 at 1:00 p.m. at The Croatian Cultural Centre (3250 Commercial Drive, Vancouver, BC) 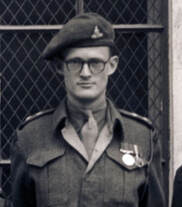 Major David Michael Mills Goldie CD, QC
Goldie, David Michael Mills, The Honourable, Major (ret) CD, QC, passed away on 21 March 2012 in Vancouver BC, He was in his 88th year.  Major Goldie served with 15th Field Artillery Regiment for many years.  He was predeceased by his beloved wife of 58 years, Lorraine Catherine Conway Goldie, and his parents, Lieutenant-Colonel E.C. (Pat) Goldie and Lieutenant Nursing Sister Margaret (Peggy) Mills Goldie. Michael was born in Toronto on July 1, 1924 and arrived in B.C. three years later to grow up, in part and very happily, on Bowen Island.   He was a founding governor of the Law Foundation of British Columbia, a valued participant in the Cambridge Lectures of The Canadian Institute for Advanced Legal Studies as well as a member of the Canada- U.S. Legal Exchange and a Fellow of the American College of Trial Lawyers.  Sailing on Elsinore was a special pleasure and the family has happy memories of cruising in the Gulf Islands in the late ’60s and early ’70s with Michael at the helm, a good wind at his back, and the delight of small children dipping their legs over the lee rail into the warm, foaming Pacific on a hot summer day. Michael was a scholar, sailor, soldier and a gentleman who had the respect and admiration of his peers and colleagues. His children and grandchildren are indebted to him for his wisdom, generosity and love. He will long be remembered.

Lieutenant Kenneth West
March 1953 – November 2012 - Following a long battle with cancer and in the company of his family, Kenneth Anton-Rea West of North Vancouver peacefully passed away at the North Shore Hospice on November 15th, 2012, at the age of 59. Born in Bangor, County Down, Northern Ireland, on March 15th 1953 he is predeceased by his father Chrys, mother Irene and brother Richard. He immigrated to Canada with wife Barbara in 1977 and worked as a journalist at newspapers in Calgary, Toronto and Vancouver. He loved living in Canada and enjoyed a great deal of time in the outdoors throughout his life here. Ken is survived by sons Richard and Andrew; grandchildren Markus and Keiana; partner Vicki Bautista and their children, Catherine and Kerry. In lieu of flowers, donations may be given to BC Cancer Agency or North Shore Hospice. Ken has chosen to donate his body to the UBC Science Program. In lieu of a funeral service, a gathering for family and friends will be held on Saturday, December 1st, 2012, at 1 p.m., at the Royal Canadian Legion Branch 118, 123 West 15th Street, North Vancouver.
Published in Vancouver Sun and/or The Province on Nov. 21, 2012
- See more at: http://www.legacy.com/obituaries/theprovince/obituary.aspx?pid=161174959#sthash.VqPqCx0d.dpuf
Kenneth was a Lieutenant in 15th Field Artillery Regiment RCA from 1988 to 1992.
Back to 2012
Copyright © 2015, 2016, 2017, 2018, 2019, 2020, 2021
Webmaster/editor - Leon Jensen, OMM, CD, Commanding Officer 1998-2001, Regimental Sergeant Major 1986-1988
Additional photos and stories as well as comments regarding errors and omissions would be greatly appreciated. ​
​Have I inadvertently placed personal information of yours on line that you don't approve of?
​Please accept my apologies and contact me at president.vcrgunners@gmail.com and I’ll have it removed.