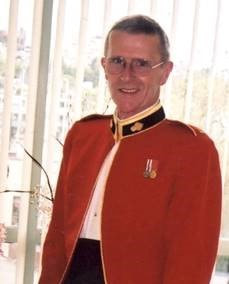 ​Major Peter Michael Erwin CD November 10, 1942 - January 14, 2015.
Born in Vancouver to Francis and Phyllis Erwin, Peter was always interested in music and at age 8 joined the world famous Kitsilano Boys Band; touring with the band in Europe in 1958.  After the Kits Band, he joined the 15th Field Artillery Regiment Band, ultimately becoming Bandmaster.  As Bandmaster, he started the process of changing the band from a group of dedicated amateurs to the highly competent, professional group it is today.  He went on to become Area Director of Music for BC Army Bands.  Peter retired from bands in 1985 with the rank of Major.
In his working life, Peter was involved in both real estate and automotive sales.  From 1976 - 1986 he played an integral part in the redevelopment of Gastown and was owner of The Gastown Wax Museum.
Survived by his wife of nearly 40 years, Irmgard, younger brother, David, son, Geoffrey, step-children Ted and Petra, and 7 grandchildren.
Peter was a great organizer and musician who touched the lives of many.  He will be greatly missed.  A Celebration of His Life will take place in the Officers and Snr NCOs Messes at Bessborough Armoury, 2025 W 11th Ave, Vancouver, on March 28, 2015, 13:00 - 17:00 Hrs.  In lieu of flowers, donations towards the Celebration of Life would be most appreciated.  Donations can be made to the 15 Field Regimental Society, a registered charitable society, which will be funding Peter’s Celebration of Life.  Anyone donating over $25 will be given a Tax Receipt.  Money collected will go to current Band projects, which includes a major project to replace the band’s aging ceremonial uniforms.
​ 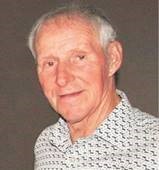 Corporal Anthony (Tony) Lawrence July 3, 1936 - February 7, 2015
Tony will be remembered for his easy going nature and sense of humour. Even with the burden of Parkinson’s he still managed to hang onto his fun outlook on life. Tony will be forever missed by his wife of 54 years Rosemary, son Dean (Liz), daughter Fiona (Rick) and grandchildren Alesha, Austin, Tara-Rose, Riley and Hayden, as well as a niece and nephews in Santa Barbara, California.
Tony was born in Eastbourne, England.  He served in the Merchant Navy and travelled the world.  He also served with the 2nd Bn, The Parachute Regiment, where he qualified as a PT Instructor, and was deployed to the Suez Canal Zone in Egypt. He ‘retired’ as a Cpl.  In Canada, he had a friend serving in 15 Field Artillery Regiment and wanted to join. However, because he didn’t have any Gunner trade qualifications, he had to join the Royal Canadian Army Service Corps and serve with 15 Fd on attachment.​ 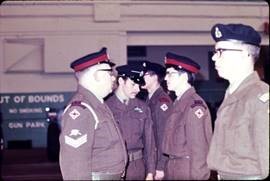 Sgt Bill Amos and Cpl Tony Lawrence inspect candidates on an ‘all Arms’ recruit course held at Bessborough Armoury in the mid-60s.   This picture was published in the ‘Who is it’ section of the Vancouver Artillery Association newsletter of 9 Sept 2014.
Tony emigrated to Canada in 1967 and worked for many happy years with the West Vancouver Parks Board. To this day you may see some of the many trails he helped to create and maintain. Tony was an enthusiastic athlete, coaching soccer, lacrosse, and teaching keep fit and still found time to run a few marathons! A celebration of life was held at Boal Chapel 1505 Lillooet Road, North Vancouver on February 21st. Memorial contributions may be made to either the North Shore Hospice Society or to the Parkinson's Society British Columbia.

CAPTAIN TERENCE CROSBY O’BRIEN RCA   14 October 1934 - 22 May 2015
Terry O’Brien born in Whitewood, Saskatchewan passed away peacefully in Vancouver, BC on 22 May 2015 in his 80th year. Terry was predeceased by his parents Alice and David O’Brien.  Beloved husband, adored father, grandfather, brother, uncle, friend and respected lawyer, he will be deeply missed by all who were fortunate enough to have known him. Terry is survived by his loving and devoted wife Lynda-May, children Meghan Cressman (David), Aubin Constable (Miles), Justin, step-daughter Brenda Rigney (Brendan); and grandchildren Nola, Tilda, Georgia, Miranda and Rowan. He was the dear brother of Michael (Gretchen) and David (Anne).  Terry will be greatly missed by eleven nieces and nephews, fourteen great nieces and nephews, and extended family and friends. Terry moved to Ft. Langley, BC at the age of 10 with his parents and two younger brothers where he grew up learning to hunt and fish, two of his many passions. After graduating from Langley High School he attended UBC and attained a BA and LLB. While at university Terry joined the Canadian Officers’ Training Corp in 1952, received his commission as Second Lieutenant in 1954 and later held the rank of Captain in 15 Field Artillery Regiment, The Royal Regiment of Canadian Artillery. Terry accepted the position of Secretary to the High Commissioner, UNHCR and served in Geneva, Switzerland between 1961 and 1964. He returned to Vancouver to article and practice corporate law at Harper Grey LLP until his retirement in 1999. He was a Member of the Canadian Tax Foundation and a 50-year Member of the Law Society of BC. He was a passionate and rigorous supporter of the environment and wildlife habitat preservation in particular. Terry became a Founding Director of the Habitat Conservation Trust Fund of British Columbia in 1979 and served for over 15 years; was the Founding Director and Treasurer of the re-constituted BC Conservation Foundation and served in this position for over 30 years; was Honorary Solicitor, BC Wildlife Federation for 20 years and was an active Member of the Upland Bird Society for 15 years. A 63-year Member of the Conservative Party of Canada; 50-year Member of the Sir John A. Macdonald Society; 34-year Member of The Vancouver Club; 13-year Member of Pennask Lake Fishing and Game Club; a Member of Zeta Phi Fraternity; and former 20-year Member of the Sir Winston Churchill Society Terry was also a Founding Member of the MG Jaguar Club and the "Pre-'56 MG Unclub".  He loved his 1949 MG Tourer. Terry was awarded the Canada 125 Commemorative Medal and the Queen Elizabeth II Diamond Jubilee Medal in recognition of his service to his country and the environment. Terry had a passion for travel, antiques, Room 15, family gatherings, a good political debate, war history, listening to Justin sing, hunting and fly fishing.  However, when the first grandchild arrived everything else came second.  He absolutely adored his 5 grandchildren and cancelled anything to be in their presence - whether it was teaching them to fly fish, "Sleepless in Seattle" weekends, trips to Ireland, South Africa, movie nights or just over to Vancouver Island, he was always there. He brought joy to our lives. He loved and was loved. He was a gentleman of distinction and integrity. The memory of his beautiful smile will warm our hearts forever. He is with God. A Memorial Service will be held on Wednesday, 05 August at 2:00 pm at St. Andrew's Wesley United Church, 1012 Nelson Street. In lieu of flowers, donations may be made to the Order of St. John Palliative Care Foundation, Suite 2200, Four Bentall Centre, 1055 Dunsmuir Street, PO Box 49214, Vancouver, BC, V7X 1K8. Online condolences may be made at:www.kearneyfs.com/obituaries 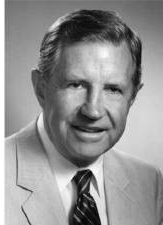 Ron was born November 19, 1925 in Chuquicamata. Chile and died December 28 at Evergreen House. He was predeceased by his sister Jean and brothers Alec and Harry. He is survived by his wife of 63 years: Elspeth and daughters Anita (Tim). Mia Barbara (Lee) and Cate (YP); three grandsons: two step-granddaughters; one step-great-grandson; and many nieces and nephews. 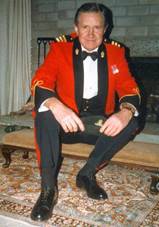 Ron Immigrated to Canada in 1944 to join the RCAF and later the army. He graduated from UBC (Commerce) in 1949 and joined James Richardson & Sons in 1952 where he was manager of the Vancouver office for many years. Ron was Consul for Bolivia. served on the Board of Shaughnessy Hospital Foundation. Chaired the Vancouver Stock Exchange and was a member of Kiwanis. He was President of the University Club and the Canadian Club of Vancouver. Chair of Vancouver Corps of Commissionaires and served as Honorary Colonel of the 15th Field Artillery Regiment. He was a member of Capilano Golf Club and the West Van Tennis Club. Ron will be missed for his gentle nature, warm heart and good humour.
In lieu of flowers, please donate to the Salvation Army, North Shore Hospice or charity of your choice.
Memorial Service will be on Saturday, January 9 at 2pm at St Stephen's Church, 885 - 22nd Street, West Vancouver. CIAO. Ron!
Back to 2015
Copyright © 2015, 2016, 2017, 2018, 2019, 2020, 2021
Webmaster/editor - Leon Jensen, OMM, CD, Commanding Officer 1998-2001, Regimental Sergeant Major 1986-1988
Additional photos and stories as well as comments regarding errors and omissions would be greatly appreciated. ​
​Have I inadvertently placed personal information of yours on line that you don't approve of?
​Please accept my apologies and contact me at president.vcrgunners@gmail.com and I’ll have it removed.