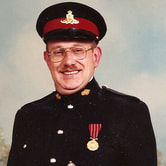 Captain William (Bill) Joseph Amos CD
11 Sept 1946 – 19 June 2016
Bill joined 15 Field Artillery Regiment RCA in 1969.  He spent his early years in the Motor Transport Section (209 Bty).  He was promoted to Bombardier in 1971 and Sergeant in 1974.
In 1980 he was awarded the Dumoulin Trophy as the most efficient member of the Sergeants Mess.  In 1976 he was promoted to Master Warrant Officer, then Chief Warrant Officer and Regimental Sergeant Major from 1983 to 1986.
After completing his term as RSM he was promoted Captain in 1986 and retired in 1990.
Bill’s family has arranged a service for Bill in the church where they went as children.   The details are:
Thursday 21 July at 13:30
South Burnaby United Church
7591 Gray Avenue (corner of Rumble Street) Burnaby, BC
The family will hold a short reception at the church following the service. 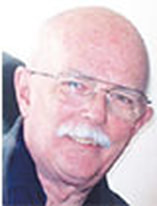 ​Captain Scott Patch CD
Scott Patch, 75 years, passed away in Langley on Sunday August 14, 2016. He will be lovingly remembered by his wife of 38 years, Jackie, his daughters Cindy (Duane Monsen), Jennifer (Dominic Bifolchi) and his son Nathan (Vanessa Leslie). He is sadly missed by his grandchildren, Laura and Derek Monsen, and many relatives and friends. Scott was born in Vancouver and moved to Kelowna as a teenager. He graduated from Kelowna Secondary School in 1959. He worked for the provincial government for over 35 years, first in the Department of Highways and then in Emergency Management, working throughout the province before settling in the Lower Mainland. He served with the Reserve Forces in Kamloops (Rocky Mountain Rangers), Kelowna (British Columbia Dragoons), Sault Ste Marie (49th Field Artillery) and Vancouver (15th Field Artillery), retiring as a Captain after 26 years. Scott was active in historical re-enacting, both in Canada and Washington State and he enjoyed many stories around the camp fires with his fellow re-enactors. After retirement Scott enjoyed Wednesday lunches with friends, birdwatching, reading about military history, and time with his family. A memorial service will be held at Henderson’s (Langley) Funeral Home on Monday August 22, 2016 at 1:00 pm. In lieu of flowers donations may be made to the Rocky Mountain Rangers Regimental Museum, 1221 McGill Road, Kamloops, BC.
Back to 2016
Copyright © 2015, 2016, 2017, 2018, 2019, 2020, 2021
Webmaster/editor - Leon Jensen, OMM, CD, Commanding Officer 1998-2001, Regimental Sergeant Major 1986-1988
Additional photos and stories as well as comments regarding errors and omissions would be greatly appreciated. ​
​Have I inadvertently placed personal information of yours on line that you don't approve of?
​Please accept my apologies and contact me at president.vcrgunners@gmail.com and I’ll have it removed.