VANCOUVER GUNNERS
Obituaries
Gynette Jessop -  31 August 2017
It is with deep sadness that we announce the passing of Gynette Jessop who passed away on Thursday evening after a long battle against bone cancer. Gynette was the lovely wife of former Commanding Officer John Jessop.
As Gynette loved animals, John has asked that in lieu of flowers, please make a donation to your local SPCA in her name.
Gynette will be cremated and there will be a celebration of life get together at a date to be determined. 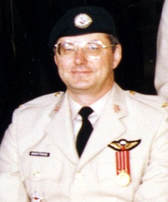 Captain David James Montrose, CD
September 1, 1948 - September 23, 2017
The loving son of parents Edwin, and Lydia Montrose (deceased). Dave was loved and will be greatly missed by siblings Amy (Carla) Montrose, Mark (Alexandra) Montrose and Mona-Ann (Fred) Fellows as well as his 5 nieces, and 4 nephews. Services and celebration, will be held at The Royal Westminster Regiment. 530 Queens Ave. New Westminster BC, Saturday, October 28 at 1:00 p.m.
David retired as a Captain from the 15th Field Artillery Regiment RCA after transferring over from the Royal Westminster Regiment in 1993.

Sharon Christine Mugford June 7, 1946 - August 2, 2017
It is with great sadness that we announce the passing of Sharon Christine Mugford, who passed away quietly on Wednesday at Mission Memorial Hospital. Chris was the beloved wife of Robert Everett Mugford.
The service for Chris will be held at Golden Ears United Church, 22165 Dewdney Trunk Rd on Saturday, Aug 5th at 1100 – reception to follow in the church hall.
In lieu of flowers, please make a donation to your favourite charity.  Chis always supported charities that supported and cared for animals. 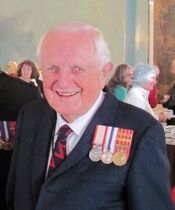 ​Arthur Edward Sherwin, C.D. RCA    Aug 5, 1923 - July 22, 2017
Arthur Sherwin, also known to those closest to him as “Art”, “The Colonel,” “Dad” and “Grandpa Boom Boom”, died on July 22, 2017 at the age of 93 in Victoria BC and went on to his next adventure, having lived life exactly the way he always wanted.
Arthur started his life in Norwood/ St Boniface, Manitoba, the son of British Immigrants, who soon found a move to the West Coast fitted their English roots. His magical childhood was spent roaming the estate at Hatley Castle (now Royal Roads University) where he grew up as the son of the Dunsmuir’s chauffeur and mechanic, loving the land and the sea and forest nearby.
At 17, shortly after WWII began, he joined the army as a gunner in 1st Searchlight Battery RCA and subsequently moved to the 5 (BC) Coast Brigade, beginning 77 years of involvement in many capacities with the 5th. A champion rifle shot in the 40's and 50's, he commanded the 5th (BC) Field Battery RCA in the late 60's and retired as Colonel Commanding Victoria Militia District in 1974. From 1972 to 1975, he served as Aide de Camp to two Governor Generals and from 1997 to 2006 as Honorary Lieutenant-Colonel to the 5th.  After military service of the 50's, he started a public accounting practice specializing in support to the optical and medical services and ran it for several decades.
He had a lifelong interest in the people and history of Victoria and often participated in heritage events, having been part of that history in many different ways. He had a leading part in the establishment of Fort Rodd Hill as a National Historic Site in 1962. He was a strong supporter of the 5th (BC) Regiment Band for decades. He was for a time president of the Royal Canadian Artillery Association and the Royal United Services Institute of Vancouver Island, and Chair of the Board of Referees for Employment Insurance.  In 2015, he appeared in a documentary video about Colwood Local Legends, in which he spoke of his life with the Dunsmuirs at Hatley Park from 1928 to 1938.
Along the way, while walking along the Dallas Road waterfront, he met his wife, Margaret (Brien) who he married in 1949. They were partners until her death in April 1989. He never married again but had a significant relationship with Bridget Crosbie until her death.
Arthur was socially active and quite the charmer at various events around town. He was always noted for his engaging conversation, his gentlemanly demeanor, and as a “natty dresser” including, often, his Ascot tie, Panama hat and ever-present pipe as he roared off in his red Rover. He prided himself on being able to get into the same suit for decades after buying it in the 1950s.
His two sons, Philip and Robin both live in Victoria. Philip shared his father’s love of the military, also becoming Commanding Officer of the 5 (BC) Field Regiment, as well as becoming the longest standing Aide de Camp to the Lieutenant Governor of BC. Robin worked for many years for the Alberta and BC Governments and has been a steadfast supporter of his father and brother living across the street.
His daughter Pam and her husband, John (Graham) in Vancouver, are the parents of Arthur’s grandchildren who he doted on from afar, Tookie and Logan Graham. They have many memories of the grandpa they nicknamed “Boom Boom” for his love of the artillery, his love of the mischievous, and his hearing which had been affected by a life standing next to cannons!
Arthur’s legacy has come full circle, as both grandchildren will celebrate his life near his British roots, in Oxford England where both are studying, Business, and Artificial Intelligence. He would have been disappointed to miss a 94th birthday party on Aug 5, 2017, but Logan had that covered since it was his birthday too.
A private family gathering has been held.  A Celebration of Life Drumhead service to remember Arthur was held at 2:00 pm on Saturday, October 21st, 2017 at the Bay Street Armoury, 715 Bay Street, Victoria BC followed by a tea reception upstairs in the 5RCA Officers Mess till 4:00pm.
Expressions of condolence and recollections of a life well lived may be sent to the family at 1346 Mitchell St, Victoria BC, V8S 4P8; or via email to arthursherwinfamily@sheldrake.ca; or via the guest book below.
Back to 2017
Copyright © 2015, 2016, 2017, 2018, 2019, 2020, 2021
Webmaster/editor - Leon Jensen, OMM, CD, Commanding Officer 1998-2001, Regimental Sergeant Major 1986-1988
Additional photos and stories as well as comments regarding errors and omissions would be greatly appreciated. ​
​Have I inadvertently placed personal information of yours on line that you don't approve of?
​Please accept my apologies and contact me at president.vcrgunners@gmail.com and I’ll have it removed.