VANCOUVER GUNNERS
Point Grey Fort - 1939
Captain Theo DuMoulin, then commander of the 58th Battery, remembered the rainy weekend when the brigade was mobilized and work began on the "fort" at Point Grey. Men of the Royal Canadian Engineers laboured at night under flood lamps banging together huts while buildings of the Dominion Wireless Station provided temporary shelter for meals. On September 3rd the entire battery took up quarters on the sandy headland overlooking the Strait of Georgia. Two 6-inch calibre coastal guns were delivered to the site by barge. The elaborate concrete emplacements for which they were destined did not yet exist and temporary positions were built on top of the cliffs. Quick-drying cement, rushed in from Seattle, was used to lay down supporting aprons for the pivot mountings of the guns. Around these were built two-tiered wooden platforms reinforced with sandbags and backfill. Cupboards for shells and charges were built into the rear of the platforms. The cordite they contained, however, is an unstable explosive that requires a controlled temperature and a dry atmosphere. T. Murray Hunter, who was a second lieutenant of the 58th Battery, had "a clear recollection, from those hectic days of August 1939, of rows of 6-inch projectiles standing under tarpaulins in the driving rain." Twenty yards behind the guns was a small wooden command post on stilts while a battery observation post was built on a point of land two hundred and fifty yards to the left of the emplacements. For a year the gunners used these makeshift structures while to the rear three reinforced concrete emplacements with attached crew shelters were constructed. Each new position had its own underground magazines linked together by a tunnel that also provided access to a new concrete battery command post. The magazines were protected from enemy gunfire by a blanket of earth and one yard thick concrete "busters" to explode any shell that penetrated the ground.
Vancouver Defended, pg 62, Peter Moogk 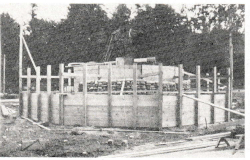 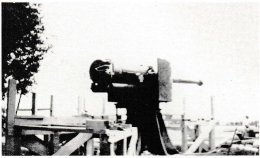 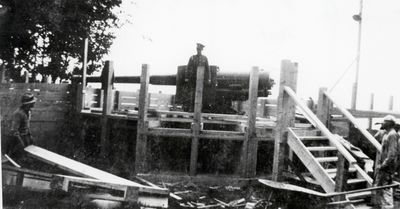 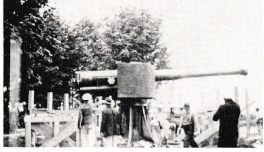 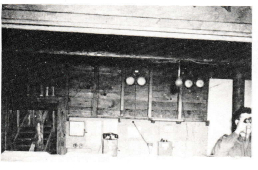