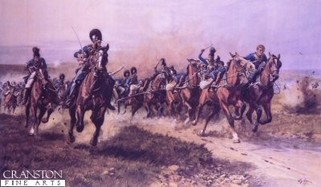 The widow of Sir Michael W.S. Bruce presented the Mess with a water colour of Norman Ramsay's Guns at Fuentes d’Onor in Spain. This picture had been presented to him by the Officers of I Battery (Bull's Troop) Royal Horse Artillery in memory of his service with that troop during the 1914 - 1918 War. It is interesting to note that Sir Michael Bruce until his death in the late 1960's was a well-known writer of children’s’ books and also wrote a column for the Vancouver Sun. It was said of him that during the victory celebrations in London on November 11, 1918, that along with his troop officers, he rode his charger into the lounge of the Savoy Hotel in the Strand, certainly following in the footsteps of Ramsay.
This battle at Fuentes d’Onor was fought on May 5th, 1811 and I Battery (Bull's Troop) Royal Horse Artillery distinguished itself. On the morning of the battle, Norman Ramsay was on picket with two guns of his troop, when he noticed the advance of the French Cavalry in numbers exceeding 4,000. They were cut off and surrounded, and it was supposed by all that the guns were lost.
Suddenly, however, a great commotion was observed among the French Squadrons, and to quote from Napier's History of the Peninsular War:
"Men and horses were seen to close with confusion and pursuit towards one point where a thick dust and loud cries and the sparkling of blades and the flashing of pistols indicating some extraordinary occurrence. Suddenly the multitude became violently agitated and English shout peeled high and clear, and Norman Ramsay burst forth sword in hand at the head of his Battery, his horse breathing fire stretched like greyhounds along the main, the guns bounding behind him like things with no weight, and the mounted gunners followed close with their heads bent low, and their pointed weapons in desperate career."
Terrific cheers from the whole British Army greeted the success of Norman Ramsay's brilliant action in thus saving the guns. His name became a by-word in the Peninsular Army, as a personification of all that was dashing and brilliant. Unfortunately, four years later, Norman Ramsay was killed at the Battle of Waterloo. He was buried at Inveresque near Edinburgh in the burial place of his family, and his memory is still guarded with much pride by the Royal Artillery.
Back to 1966
Copyright © 2015, 2016, 2017, 2018, 2019, 2020, 2021
Webmaster/editor - Leon Jensen, OMM, CD, Commanding Officer 1998-2001, Regimental Sergeant Major 1986-1988
Additional photos and stories as well as comments regarding errors and omissions would be greatly appreciated. ​
​Have I inadvertently placed personal information of yours on line that you don't approve of?
​Please accept my apologies and contact me at president.vcrgunners@gmail.com and I’ll have it removed.