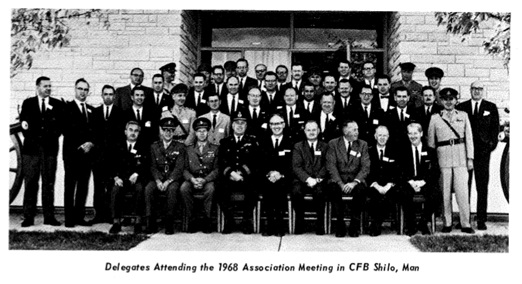 The annual meeting of the Royal Canadian Artillery Association was held at the Royal Canadian Scholl of Artillery, Shilo, during the period 25-28 September. Fifty-one delegates attended, representing Canadian Forces Headquarters, Training Command Headquarters, RCSA, all Artillery Training Headquarters and most regular and reserve artillery units across Canada.
The conference took the form of executive meetings on the first two days, followed by general meetings for all delegates. Special speakers were LGEN W.A.B. Anderson, Commander Mobile Command. COL J.P. Beer, the Chief of Artillery and COL M.H. Bateman, Director of Land Reserves. Extracts from GEN Anderson’s speech are published elsewhere in this volume. Social events included a Guest Night and a Mixed Buffet to meet Shilo officers and their wives.
Great interest was shown in a field demonstration staged by the School of Artillery and featuring live firing by the M109 155mm self propelled howitzer. Also shown were the M577 armoured command post, the M548 ammunition carrier, the AN/MPQ 501 counter mortar radar, the armoured recovery vehicle, Fennel theodolite and the Collimator. Everyone was impressed by this new equipment for which we have waited so long.
A number of resolutions were presented during the general sessions and adopted for subsequent submission to CFHQ. These included items concerning pay for summer camp, the trade of radio operator, a reduction in qualifying time for promotion to bombardier, the issue of coloured forage caps, regulations concerning commanding officers’ attendance at summer camps and a review of contingency allowances.
Considerable discussion was held on the subject of the training of junior officers. Here a major problem is resulting from the present arrangement under which officers receive their first formal artillery training on the Captain Qualifying Course at the School of Artillery. It was agreed that there is a requirement for an artillery course at an earlier stage to train the officer as a GPO/CPO. It was suggested that the present Captain Qualifying Course, which is broken into two parts, be revised so that part one would train an officer to be a GPO and part two would be oriented towards producing a troop commander. This would enable lieutenants to obtain technical training at RCSA earlier in their career. The proposal was agreed for submission to DLandR, CFHQ.
A new executive was elected with LCOL W.D. Elsdon becoming president. A vote of thanks was extended to the outgoing executive and to the president LCOL J.D. Cambridge. Next year’s meeting of the RCAA will be held in Ottawa.
Back to 1968
Copyright © 2015, 2016, 2017, 2018, 2019
Webmaster/editor - Leon Jensen, OMM, CD, Commanding Officer 1998-2001, Regimental Sergeant Major 1986-1988
Additional photos and stories as well as comments regarding errors and omissions would be greatly appreciated. ​
​Have I inadvertently placed personal information of yours on line that you don't approve of?
​Please accept my apologies and contact me at president.vcrgunners@gmail.com and I’ll have it removed.