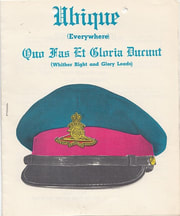 Front Cover:
Our cap Badge and our two Mottos

THANKS
(for taking time out to read me)
Within these few pages we hope to introduce and tell you just a little about ourselves and what we do. We are an organization which needs you but we also feel you need us too.

WHO ARE WE?
Well, officially we are known as The Fifteenth Field Artillery Regiment, Royal Canadian Artillery, but to many we are simply referred to as the “Gunners”.

ARE WE SOMETHING NEW?
No sir, we can trace ourselves back some 257 years to the British Gunners and over 118 years in Canada. The 15th Gunners have 53 years behind them here in Vancouver. So you see we must be something special to have lasted this long.

WHY HAVE WE LASTED SO LONG?
First and foremost we have a purpose in life and that is to aid in the maintaining of our Canadian way of life. Secondly the Comradeship, activities, and travel opportunities offered give each one of us an unforgettably rewarding experience.

WHAT CAN WE OFFER YOU?
1. A position in a Regiment of Artillery where many trades and responsibilities are required to fire, maintain and move our guns. Our prime weapon at present is the 105mm Howitzer which will fire a 33 lb projectile 12,205 yards (11,000 meters or approximately 7 miles).

2. Special training such as - artillerymen, Technicians, Communicators, Drivers, Junior Non Commission 0fficers, Senior Non Commission Officers, Officers. There are opportunities for all to climb the ladder of responsibility. Several of our recent Commanding Officers have started at the very position you are now in, that of an interested potential Gunner.

4. Band – We are the only Military Brass and Reed Band in Vancouver. The band not only excells as a Military Band but also plays on many occasions as a Concert Band. Their role as a band finds them playing at Formal parades, charity concerts, veterans hospital, dinners, formal and informal social functions. They have played in the P.N.E. Parade, Seattle Worlds Fair, Centennial Tattoo, Seattle Military Tattoo and many other events.

5.  Comradeship in the field and in our Messes (Clubs). The Messes are open certain nights of the week and other special occasions. There is a mess for the Band, Gunners, Senior Non Commission officers, and the Officers. Each Mess holds a number of enjoyable social functions throughout the year.

6. Service to our Country as part of a vital defence unit. Assistance in many non Military areas of service such as flood control civil defence, avalanche control.

7. Pay – We did not put pay at the end because it was the least important but then again we do not look upon it as our most important benefit to belonging to the 15th Field. The daily rates of pay at present are as follows.

For extended service and for call out to active duty, the pay rates are considerably increased.

1. Drop over to Bessborough Armoury at 2025 W 11th Avenue anytime on the days mentioned on the inside cover and talk over the possibilities.
2. You should be 17-35 years of age, but check with us as these regulations change from time to time. You must have your 17th birthday in year you join. 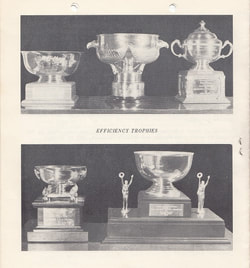 OUR HISTORY
The 15th Field Artillery Regiment has an official history spanning over half a century of service to Canada, but the roots of this proud Regiment run far more deeply into the early history of Vancouver and British Columbia. In 1885, there was a Gunner J Hall, living in the Village of Granville, as it was then called, whose devotion to the Royal Regiment led him to trek through twelve miles of forest to parade with the 1st Battery British Columbia Garrison Artillery in New Westminster. He lived to see Vancouver grow into a city, and was still living in 1920 when the 15th Brigade, Canadian Field Artillery was authorized. It consisted of three batteries of field artillery, the 31st, the 68th and the 85th, with the 5th Siege Battery attached. It is of interest to note that the 68th Battery served in North Russia in the Murmansk/Archangel area during this period, under the famed British general, Sir Edmund Ironside. Fighting in the most impossible conditions, in deep snow, with temperatures in 40 below zero, the Canadian Gunners acquitted themselves gallantly and earned the praise of General Ironside, himself an artilleryman, who wrote:
“The Canadian Artillery, by the action of its drivers and Gunners, had worthily upheld the traditions of British Gunners”.
In 1925, the 15th Brigade, CFA, was redsignated as the 15th Field Brigade, Canadian Artillery, although still consisting of the above mentioned Batteries. Through the long years of peace and into the depression years, the spirit of the early gunners endured and was rewarded in 1935 when the title "Royal” was granted to the Canadian Artillery, bringing with it the responsibility of living up to hundreds of years of British Artillery Traditions.
In 1938, the Brigade was disbanded for the purpose of reorganization and reformed as the 15th Coast Brigade, RCA and further redesignated later that year as the 15th (Vancouver) Coast Brigade, RCA. With the threat of war the Regiment was called to man the coast guns on 26 Aug 1939 which was 2 weeks before war was officially declared. During the war 1939-45 Vancouver’s Gunners manned the coastal guns and searchlight batteries in such familiar places as Stanley Park, Point Atkinson, Steveston, Point Grey, U.B.C. and even beneath the Lions Gate Bridge, while 85 Battery manned remote Yorke Island.
In 1939, the 68th Battery and the 5th Battery were converted from heavy and medium batteries, respectively, to the 9th and 11th Anti-Aircraft batteries, RCA, and allocated to the 1st Anti-Aircraft Regiment, RCA. During World War II, the Gunners occupying Bessborough Armoury were the 39th Fd Regt RCA and the 11th AA REGT RCA which trained as reserve units throughout the duration of World War II.
Although as a unit the-Regiment did not serve overseas during the Second World War, many Officers and men served with other Canadian Artillery Regiments, returning in 1945/46 to rejoin the newly redesignated 15th Coast Regiment, RCA, which then consisted of the 31st, the 85th and the 159th Coast Batteries RCA. The 159th Battery was redesignated 158th Coast Battery in late 1946 and the Regiment itself was again reorganized as the 15th Field Regiment, RCA, in 1943.
The 102nd Coast Regiment in Vancouver was raised in 1949 and. disbanded in October 1954 and amalgamated with the 43 Heavy AA Regt. The 43 heavy AA was later redesignated as the 43 Medium AA Regt, and in 1959 when the requirement for Anti-Aircraft Artillery ceased, this fine regiment was amalgamated with the 15th Field Artillery Regiment, whom then became, once again, the only gunner unit in the Vancouver area.
The unit, was then organized into five batteries the 31st, 85th, 158th, 209 and 210.  85 Battery was relocated for training in Ladner and operated successfully in the Surrey-Delta area from 1961 to 1970.  By 1966, the 210th Battery had been disbanded and 5 (BC) Fd Battery in Victoria had come under command. In 1968, this Battery was returned to independent status, leaving the most recent reorganization on 1st April 1970, which reduced the unit to two batteries 31 and 209. Later 209 Bty was renumbered as 68 Bty which was one of the original Battery numbers in 1920.
As we enter into our second fifty years, we can take pride in the record of service to Canada and British Columbia, but as Winston Churchill once said:
“This is not the beginning of the end, but the end of the beginning”.
17 Apr 75 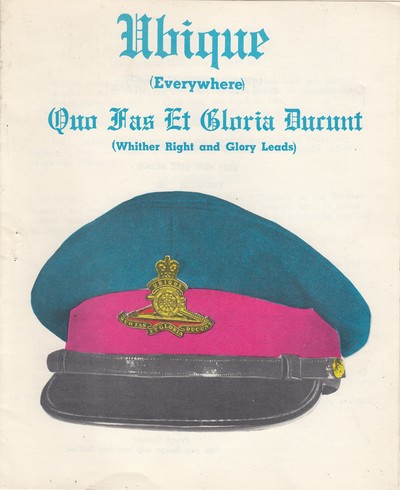 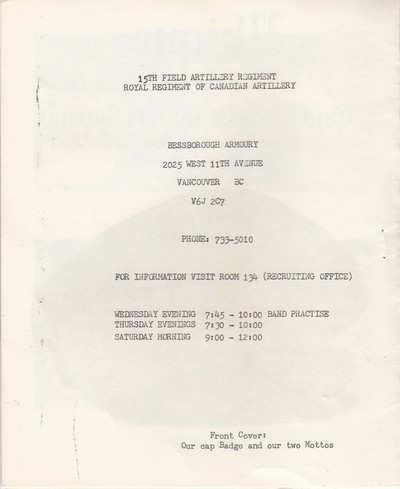 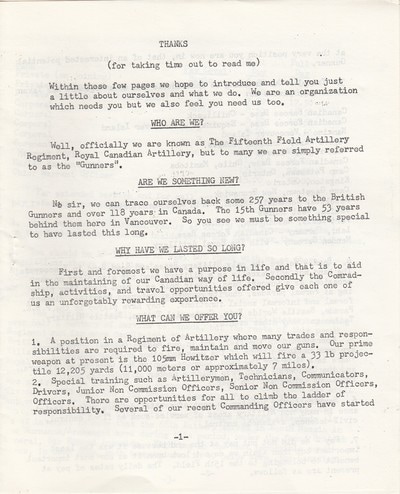 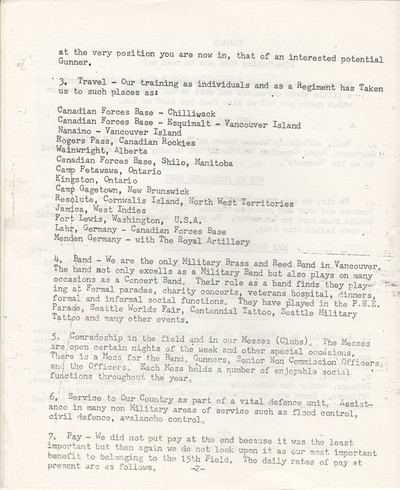 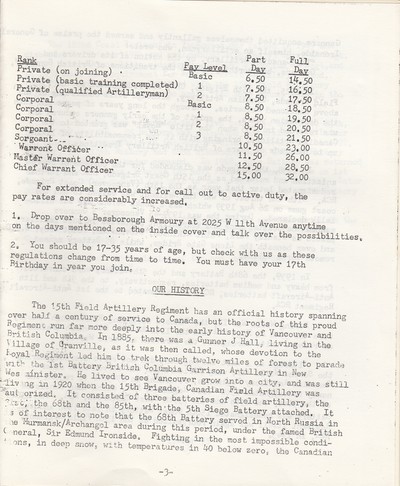 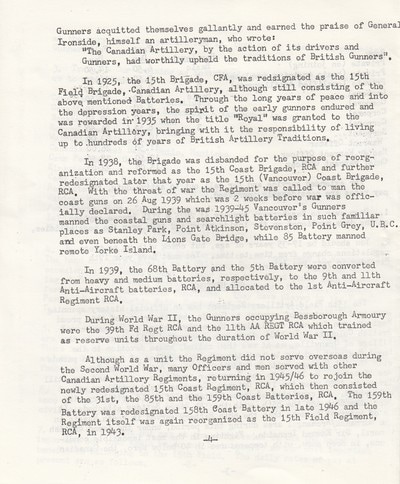 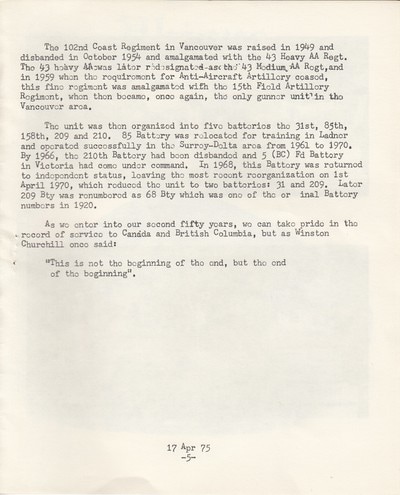 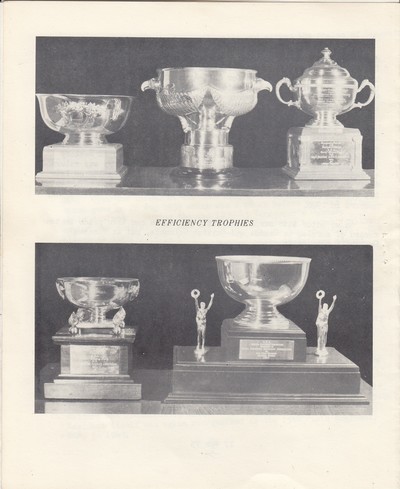