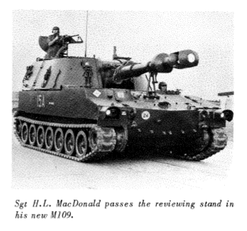 On 6 May 1968, a French-speaking field artillery regiment was added to the regular list of the Royal Regiment of Canadian Artillery. 5e Regiment d’Artillerie Legere Canadienne, (5e RALC) was formed at CFB Valcartier as a part of 5 Combat Group. The Commanding Officer is LCOL J.A.R. Vandal, CD. The regiment is equipped with the 105mm howitzer, but will soon get the L5 pack howitzer.

On 10 September 1968, the 1st Airborne Battery made their first jump in Wainwright, Alberta

On 26 September 1968 the 2nd Surface to Surface Missile (Training) Battery formed up for their final parade as the unit was closed out.