VANCOUVER GUNNERS
Annual Dinner 1980
​The District Sergeant Major, Chief Warrant Officer Eric Tyldesly-Gore, CD is presented a keepsake on behalf of the Junior Ranks of the Regiment for his previous service as Regimental Sergeant Major of 15th Field Artillery Regiment. The presenter is the President of the Junior Ranks Mess Committee, Bombardier Noel RR Dykes.
​Chief Warrant Officer Eric Tyldesly-Gore, CD is presented a memento by the Commanding officer, Lieutenant-Colonel Stu McDonald, CD on behalf of the Regiment for his service as the Regimental Sergeant Major.
The MOBCOM Cup is a concoction of spirits produced by the Battery Sergeant Major of the Firing Battery. It is passed around the table and requires the guest on either side of the drinker to stand in order to ensure their safety should the drink overcome them. The concoction is usually so strong that the cup needs to be passed around the table twice before it is totally consumed (or some brave soul empties a portion out “for later consumption” as it is passed around. It appears that the concoction was palatable this year and that the District Sergeant Major, Chief Warrant Officer Eric Tyldesley-Gore is saving an additional quantity in his coffee cup for later!
​​Chief Warrant Officer Eric Tyldesley-Gore, CD is provided assistance with his crutches in order to depart from the table. There is no correlation between the consumption of the MOBCOM Cup ingredients and the use of one’s legs…… No correlation at all…. It was a pre-existing condition…… 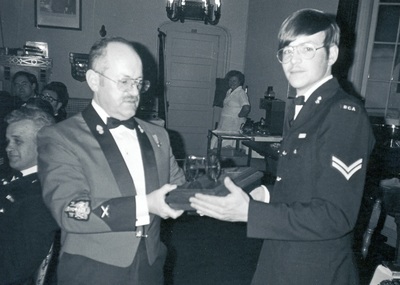 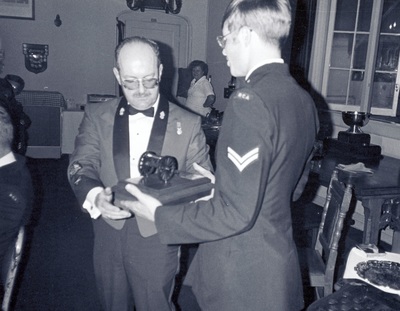 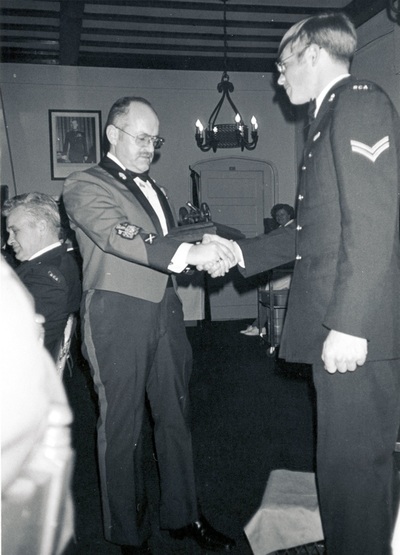 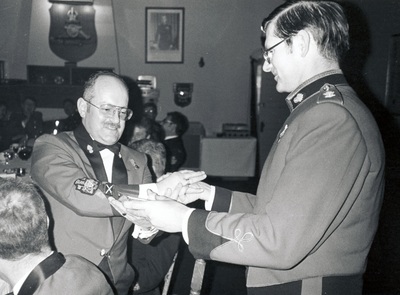 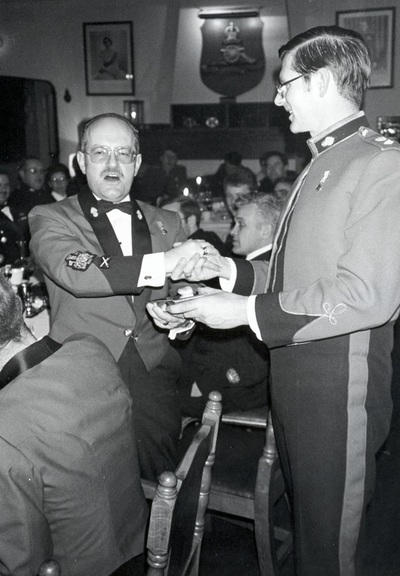 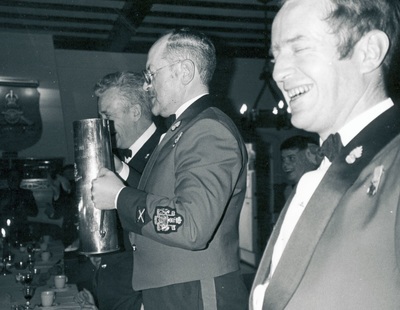 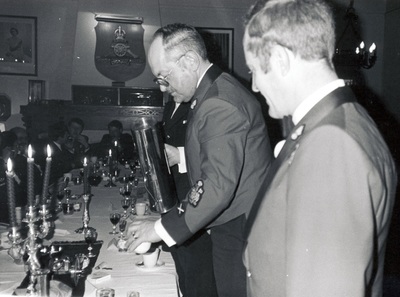 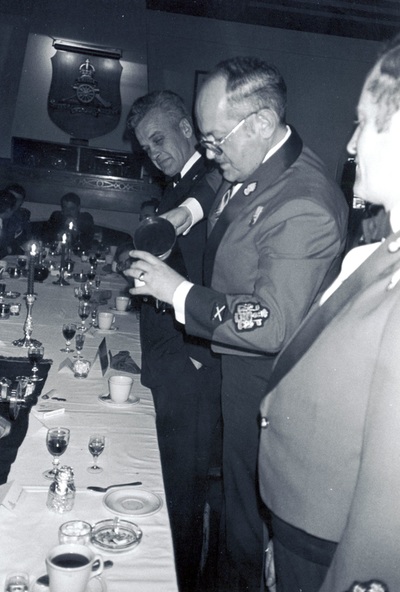 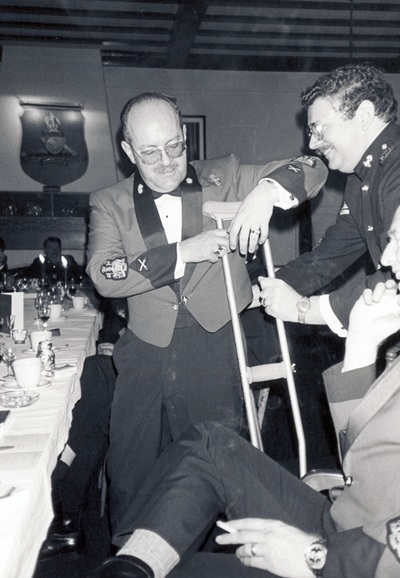 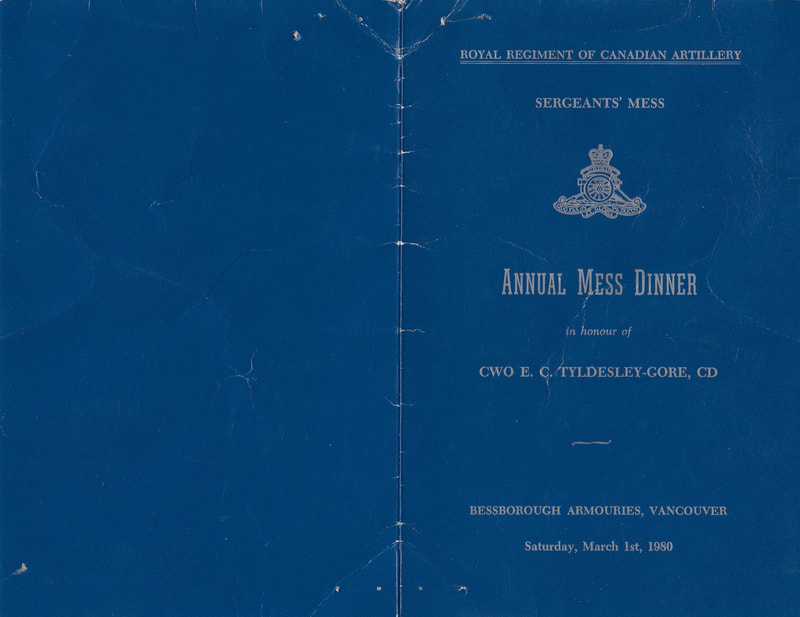 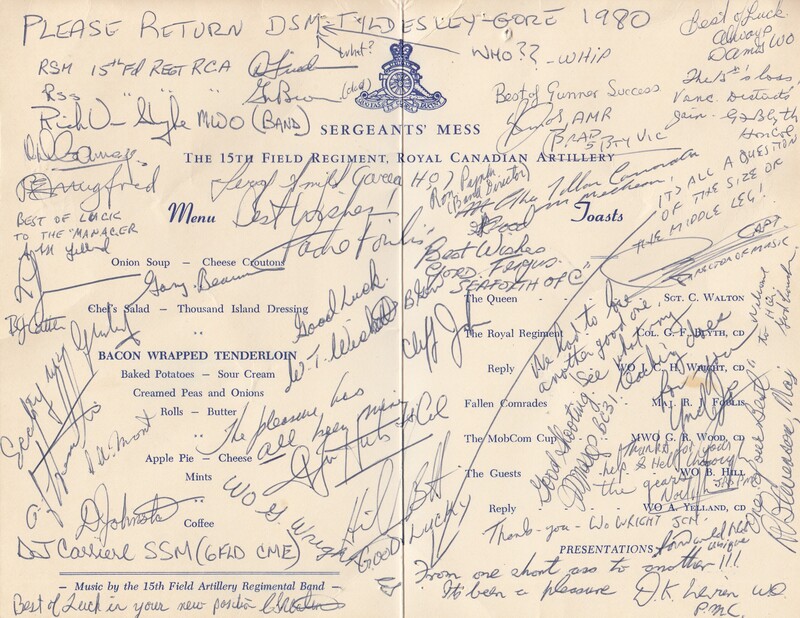 Back to 1980
Copyright © 2015, 2016, 2017, 2018, 2019, 2020, 2021
Webmaster/editor - Leon Jensen, OMM, CD, Commanding Officer 1998-2001, Regimental Sergeant Major 1986-1988
Additional photos and stories as well as comments regarding errors and omissions would be greatly appreciated. ​
​Have I inadvertently placed personal information of yours on line that you don't approve of?
​Please accept my apologies and contact me at president.vcrgunners@gmail.com and I’ll have it removed.