VANCOUVER GUNNERS
Shilo Competition 1967
It's rather chilly in Shilo and the 3rd Regiment Royal Canadian Horse Artillery Regiment provided the unit with vehicles, guns and really nice warm coats! But first the flight, compliments of Transport Command we all pile aboard the CC130 Hercules. Staff Sergeant Heinz Winter is somewhat obscured sitting beside an unidentified officer and the Lieutenant Jerry Gangur and Lieutenant Jim Clarke. Jerry was a member of the Royal Westminster Regiment attached to the unit for the weekend.
The guns deploy with the gunners wearing their stylish brown jackets. At least they're warm! Looking for identification of the gun tower as it isn't our standard deuce and a half.
Brownie points for the one that can decipher the acronym L.P.O.M.
At least in Shilo we manage to borrow the 3/4 Ton Command Post variant but we're still reduced to throwing the 6 foot folding table out the back and working in the cold. Captain Bill Wickett takes the trophy for the most stylish of officers on exercise.
There should always be a bit of time set aside for a bit of military tourism. The M113 with radar variants for detecting enemy fire can detect trajectories of 7.62 and higher for the purposes of counter-battery fire. And what's not to love about the 'Queen Mary' Command Posts. The interested spectators include one unidentified officer, Lieutenant Stuart McDonald, another unidentified officer and Lieutenant Jerry Gangur from the 'Westies'.
Our Aussie, Lieutenant Terry McMahon, hamming it up in the commander's hatch while Lieutenant Jerry Gangur checks out the inside of the Command Post variant. 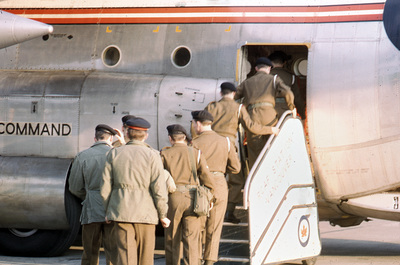 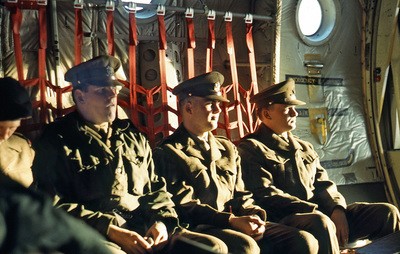 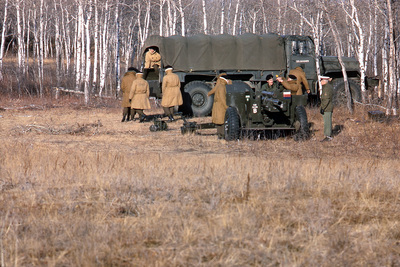 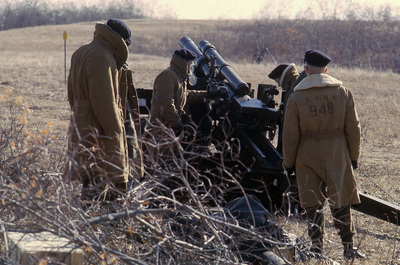 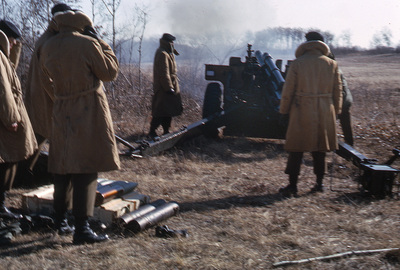 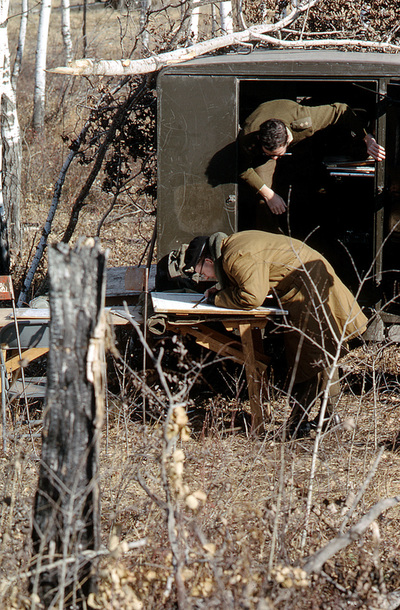 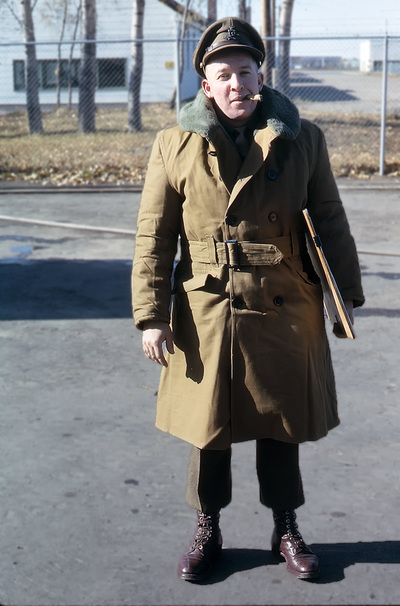 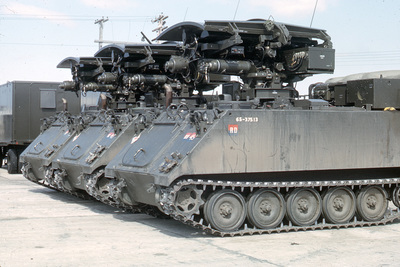 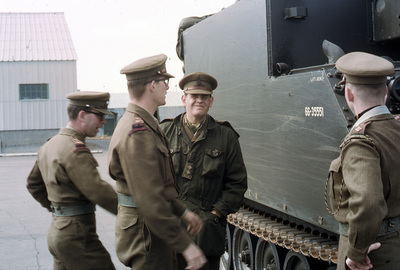 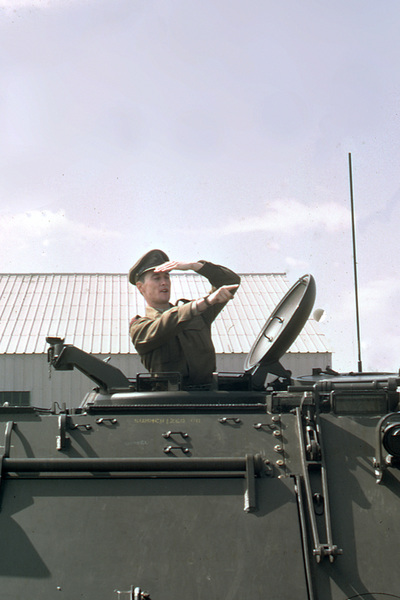 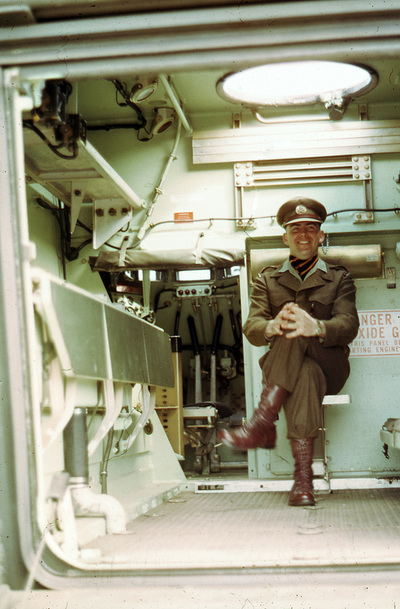 The process of setting up this website has resulted in considerable detective work. When was this photo taken? Who are these people? The Regimental Museum has a considerable quantity of these photos just waiting for the correct clue to be found. Such is the case when a new source appears with new information! Our Australian connection, Lieutenant (ret'd) Terry McMahon sent in some excellent photos from our competition in 1967. The Gunners are all dressed up in fancy, brown, sheep skinned lined jackets. Major-General (ret'd) Stuart McDonald recalls the exercise as the only one where the Regiment was ever issued these jackets by Camp Shilo. Lo and behold, the Museum collection includes a series of black and white photos where the gunners are wearing the same jacket! The jump tower in the distance indicates that it must be Camp Shilo. Therefore, odds are that it must be the same exercise!
The Troop Gun Position Officer mans the Arty boards with his technicians while the Guns record centre of arc.
The Assistant instructor in Gunnery supervises the drill and provides critiques as necessary.
The Staff Sergeant (Troop Sergeant Major?) ensures that the gun drill is carried out in accordance with the gun drill book.
If only that wicked, cold, Manitoba wind would calm down!
The only thing missing from this scenario is a confirmation of some of the gunners in the photos. Were you there? 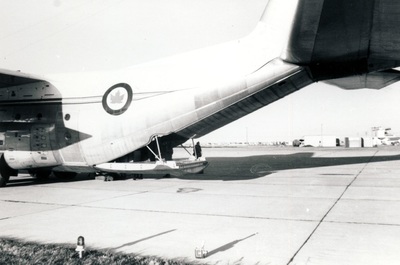 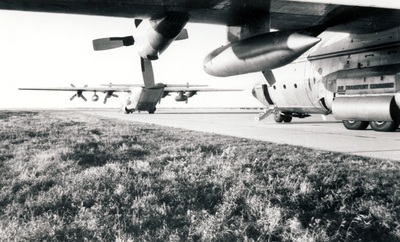 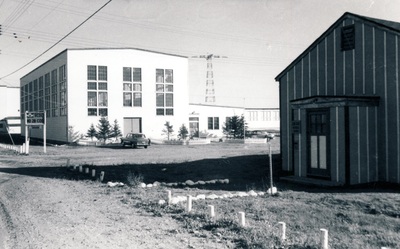 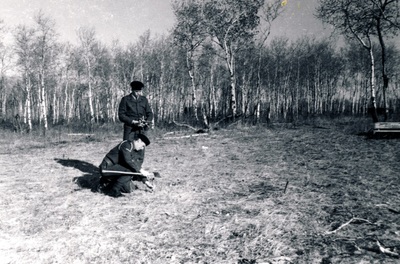 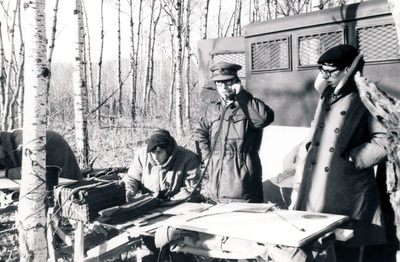 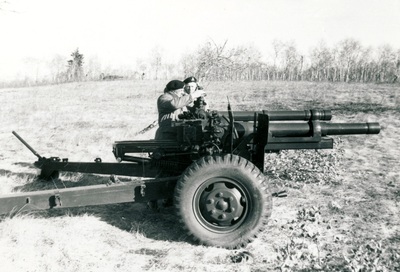 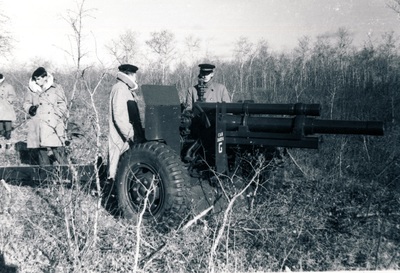 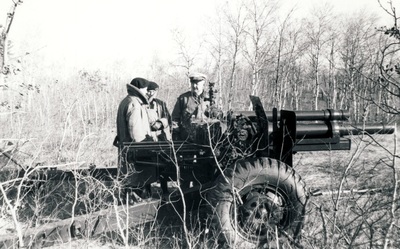 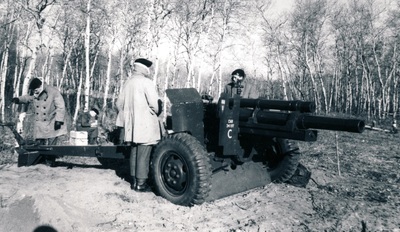 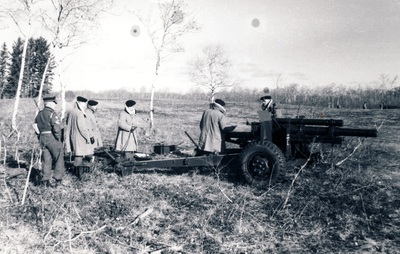 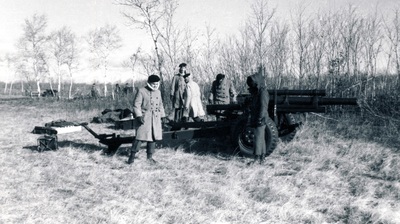 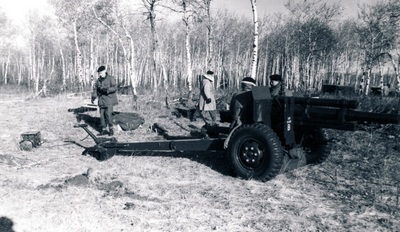 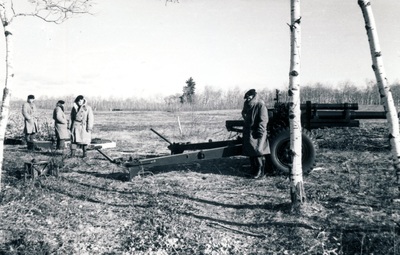 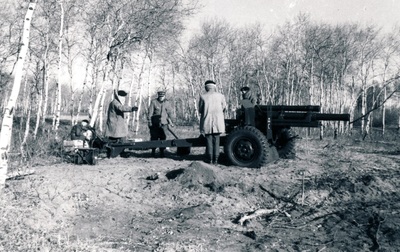