In order that the list of those to be honoured would be representative of all the regions of Canada, agencies of government at the federal, provincial, and local levels were invited to propose the names of candidates for the medal. National organizations in every important field of endeavour, including the professions, education and arts, veterans' groups, sports associations, philanthropic and charitable bodies and welfare services were asked to participate in submitting nominations. All members of the Order of Canada, Order of Military Merit and winners of the Canadian Bravery Decorations received the medal. Selection for the Armed Forces was based on merit with length of service and prestige of current appointment as secondary consideration. There is no bar to the medal.
DescriptionThe circular silver medal, 1.25 inches (32 mm) in diameter, has a thin, smooth raised rim. The Canadian issue was slightly thicker than the British issue.
Obverse The obverse shows Queen Elizabeth II, facing right, wearing the high Imperial State Crown. The inscription around the rim reads: ELIZABETH II DEI GRATIA REGINA FID DEF.
ReverseThe reverse shows a large stylized maple leaf with CANADA around the top rim and 1952 EIIR 1977 in small lettering around the bottom of the rim. The EIIR has a small crown on top. In very small letters above and between the EIIR and 1977 is the word HUNT (for the designer of the medal Dora de Pédery-Hunt).
Mounting A 0.5 inch (12 mm) silver ring, which holds the ribbon, passes through a small hollow ball at the top of a claw joined to the top of the medal.
RibbonThe watered white ribbon (representing the silver) is 1.25 inches (30 mm) wide, with cardinal red edge stripes (1 mm each). The middle is garter blue (7 mm wide), with a cardinal stripe (1 mm wide) running through its centre. 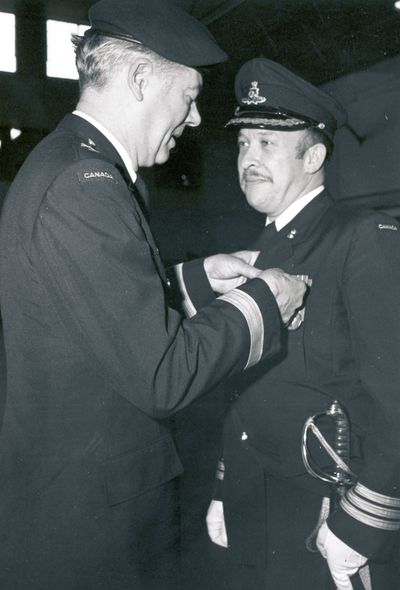 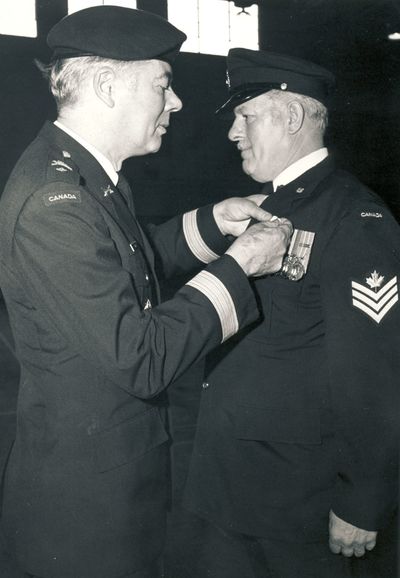