VANCOUVER GUNNERS
Saint Cecilia’s Dinner 2003
Saint Cecilia is the patroness of musicians. It is written that as the musicians played at her wedding she "sang in her heart to the Lord". Her feast day is celebrated in the Latin Catholic, Eastern Catholic, Anglican, and Eastern Orthodox churches on November 22. She is one of seven women, excluding the Blessed Virgin, commemorated by name in the Canon of the Mass. As the patroness, her name has been taken on by the Band of the 15th Field Artillery Regiment for their Annual Mess Dinner.
Notable guests come from far and wide to attend this momentous event. In the photo to the left we have Lieutenant-Colonel Fran Chiton, Mackay, CD, Staff Officer Bands from Army Headquarters in company with Mrs. Shirley Wickett, Mrs Barbara Pell, Captain Archie Pell, CD and the Honorary Colonel, Brigadier-General William (Bill) T. Wickett, CD.
Wikepedia, http://en.wikipedia.org/wiki/Saint_Cecilia 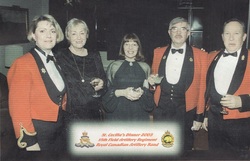