VANCOUVER GUNNERS
Student Youth Employment Plan (SYEP) 1986
​A special day for the unit SYEP troop as they were selected to try out the newest laser tag system (sometimes known as MILES - multiple integrated laser engagement system). The evaluation brought up a team from the US Army with no less than a three star, Lieutenant General and some civilian gentlemen.
The Base Commander CFB Chilliwack and some of his headquarters staff were also in attendance to view the latest technology. At this point the laser system still required a rather large box to be worn by the soldier.
Hopefully its not the first time the US Army three star has determined that the Canadian Army, as demonstrated by Sergeant Amnon Lichtmann, wear a different webbing system and carry different weapons than his own Army.
But before the higher ups can watch the show, Sergeant Lichtmann has to get them out to the rifle range, brief them and get them kitted out. The group shot at the rear of the vehicles is a little distant and I can only make out the following: 1,2, Private Ken Chiu, 4,5,6,7, 8, 9, 10, 11, 12, 13, Sergeant Amnon Lichtmann, 15. At the briefing I can see 1, Private Ken Chiu, 3,4,5,6, Sergeant Amnon Lichtmann, 8, 9, 10.
Sergeant Amnon Lichtmann caught in the glare of the camera. Private Ken Chiu searching for his magazine.
Looking for names!!!
The platoon is readied for the assault! 9mm SMGs, 7.62 FN C1s and FN C2s.
The charge!
Throw in some smoke for dramatic effect!
Test the equipment kneeling and crawling.
Seems to have been an enjoyable activity, even with the inevitable brass clean up at the end of the day. 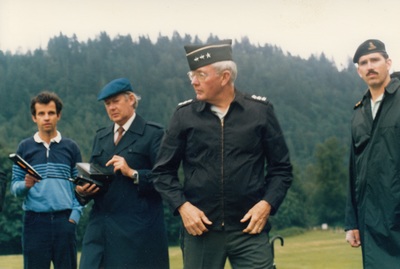 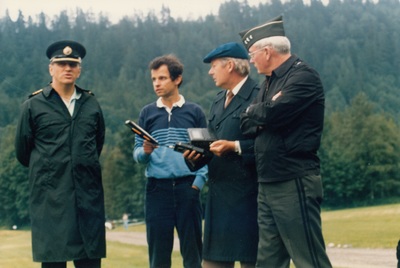 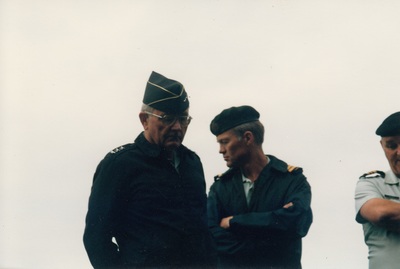 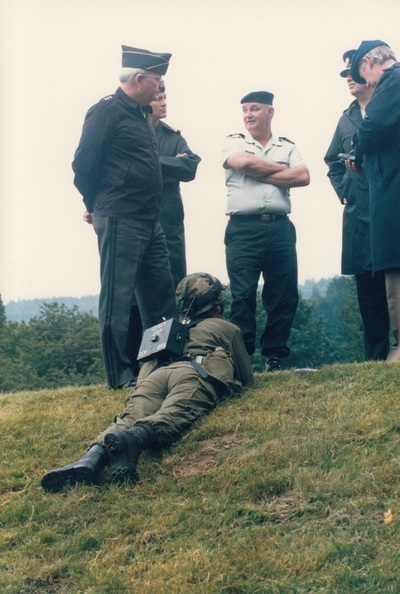 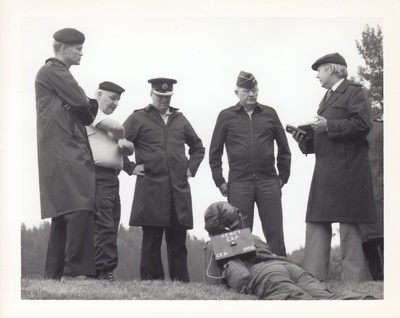 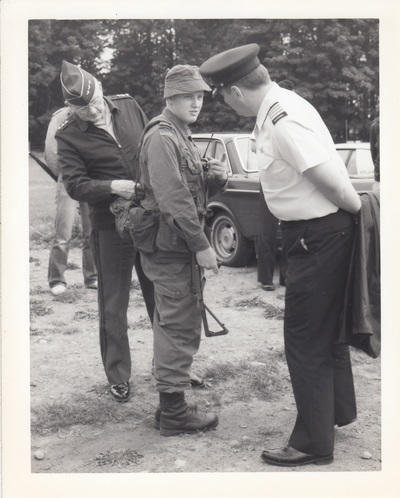 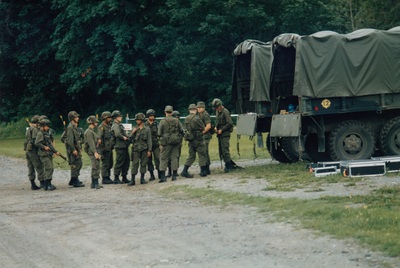 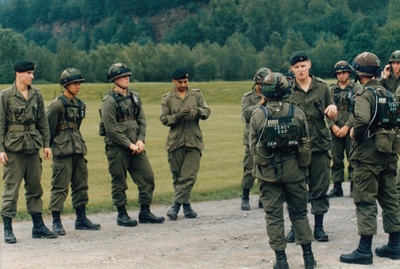 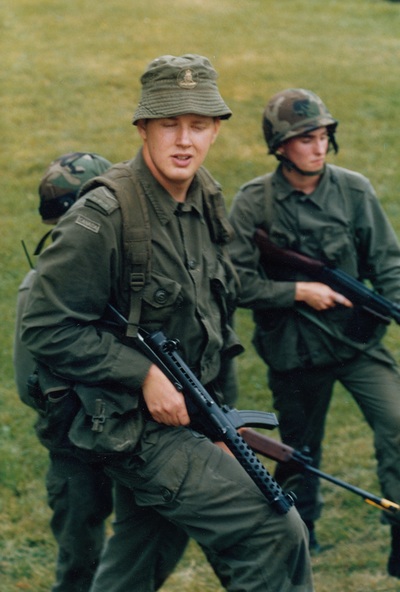 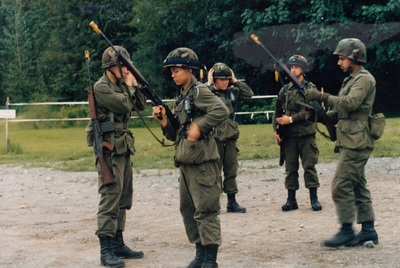 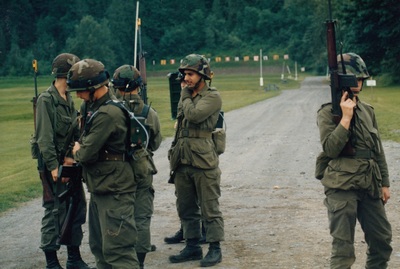 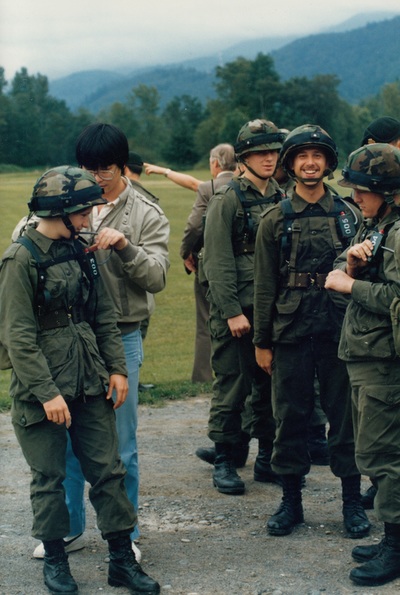 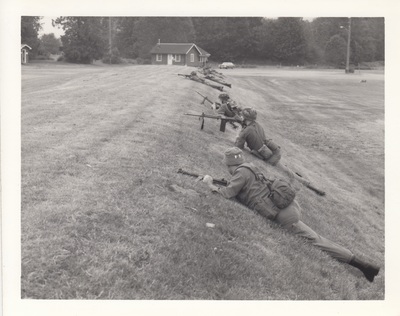 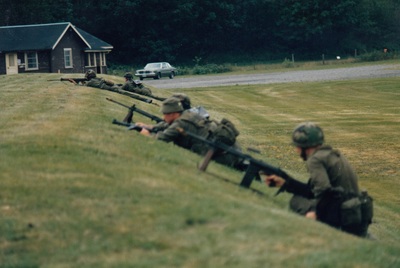 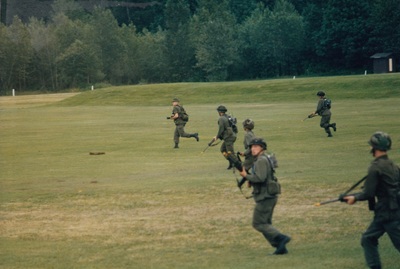 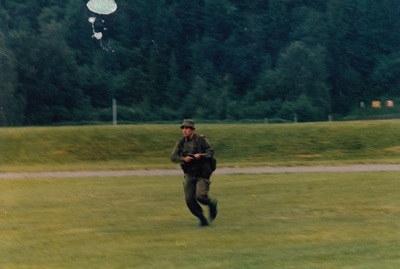 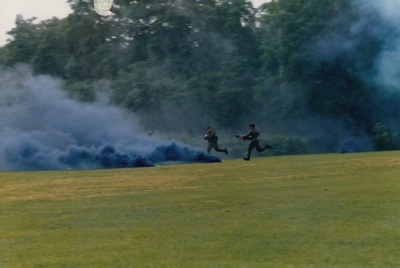 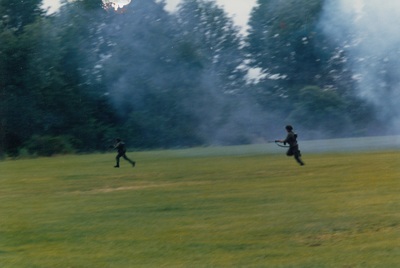 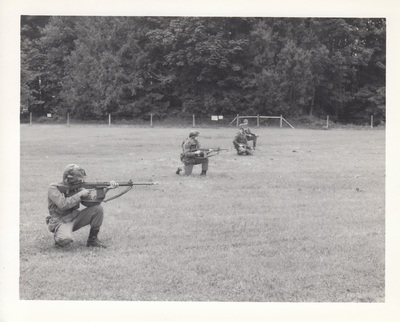 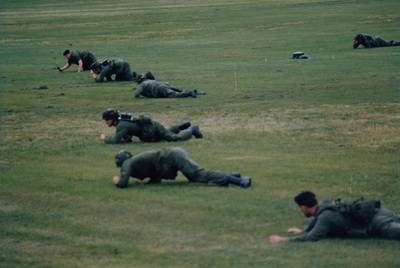 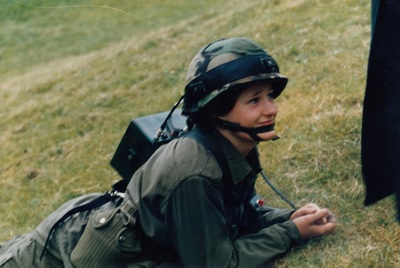 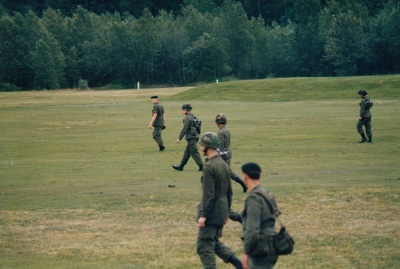 Back to 1986
Copyright © 2015, 2016, 2017, 2018, 2019, 2020, 2021
Webmaster/editor - Leon Jensen, OMM, CD, Commanding Officer 1998-2001, Regimental Sergeant Major 1986-1988
Additional photos and stories as well as comments regarding errors and omissions would be greatly appreciated. ​
​Have I inadvertently placed personal information of yours on line that you don't approve of?
​Please accept my apologies and contact me at president.vcrgunners@gmail.com and I’ll have it removed.