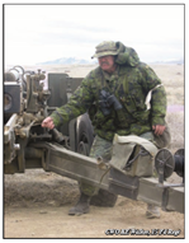 Chris Comars firing his last round
2Lt Ramsay Haug
It has been a busy training year for members of the 5th (BC) and 15th Field Regiments. Some of the most notable tasks include deployments to Afghanistan, Sudan and the Vancouver Olympics.  Another notable points from the training year includes a large boost to recruitment.  The 5th alone can boast of achieving 188% of its intended recruitment goal.
Recently though, over Easter weekend from April 1st to April 5th, members of both regiments participated in Ex. TOTAL RAM in Yakima, Washington.  The intent of the exercise was to test soldiers, noncommissioned officers and junior officers in gunnery and local defence as part of the army’s individual and collective battle task standards. The exercise also incorporated members of the Vancouver Police Department, who participated dynamically as members of the opposition force.
The exercise itself kicked off a bit unexpectedly with some “light” snow.  For those unaware of the Yakima training area this is more than a bit abnormal.  Consequently, some light humour from our American colleagues at the Yakima range control center made the claim that the Canadians seemed to bring the snow with them.  However, throughout the course of the exercise the weather gradually improved.
As the exercise continued to move forward, the true strength of the gunnery training and local defence stands were made apparent.  As with any exercise, when two units come together, training started off slow and meticulous to ensure that mistakes were readily detected, “we walk before we run.”  However, as is natural with any given exercise the tempo and skills improved quickly. By the conclusion, complex tasks such as crash hides and gunline defence were being conducted in an efficient and effective manner.
One of the true strengths of the Ex TOTAL RAM was that it incorporated the Vancouver Police Department (VPD) as an opposition force.  Some of the individual stands that were conducted by the VPD included crossing through both friendly and enemy checkpoints, defence of the gunline and improvised explosive attacks.  The result of this alternative training style was to create an entirely new experience that challenged the junior leadership and soldiers of the Battery.  This expanded our training to fit the contemporary operating environment.  Although we will soon cease our offensive role in Afghanistan, this training will still serve us well as we continue to see combat in other parts of the modern world.
In terms of the overall gunnery experience, the soldiers and leaders of the Battery were able to fire over 350 rounds throughout the course of the exercise.  Some of these missions included Illumination and Marking missions, as well as, Direct Fire missions.  If you were to ask those in attendance, the Direct Fire missions would seem to have been a highlight for most, especially to those new soldiers who had never seen a Direct Fire mission at close range.
On a final note, the exercise saw the CO, LCol Craig Cotter, fire his last round as a gunner as he prepares to hand over the Regiment in preparation for his retirement from the artillery.
The Quadrant, Volume 26 Issue 1, Summer 2010
Back to 2009
Copyright © 2015, 2016, 2017, 2018, 2019, 2020, 2021
Webmaster/editor - Leon Jensen, OMM, CD, Commanding Officer 1998-2001, Regimental Sergeant Major 1986-1988
Additional photos and stories as well as comments regarding errors and omissions would be greatly appreciated. ​
​Have I inadvertently placed personal information of yours on line that you don't approve of?
​Please accept my apologies and contact me at president.vcrgunners@gmail.com and I’ll have it removed.