VANCOUVER GUNNERS
​Visit of USS Peleliu - 7 December 1982
​It's Dail-a-Sailor time in Vancouver
Dec. 8, 1982 http://www.upi.com/Archives/1982/12/08/Its-Dail-a-Sailor-time-in-Vancouver/5168408171600
VANCOUVER, British Columbia -- Psst -- hey swabby -- want to have a good time? Try Vancouver, B.C. They have Dial-a-Sailor.
About 3,000 Canadian and U.S. sailors back from long voyages and loaded with about $1 million in back pay were visiting the West Coast port city Wednesday.
Promoter Doug McClarty is offering the men a way to see the city with a newfound friend through his Dial-a-Sailor campaign that was started last year for the visit of the aircraft carrier USS Ranger.
'I know of at least two or three marriages that resulted from the Ranger's visit, and I know a lot of people are still writing to each other.'
People who call Dial-a-Sailor must outline what activities they wish to engage in, McClarty said. They must indicate whether they want to go shopping, dancing, skiing, sailing, to a nightclub or an activity of their own suggestion.
'It's mostly women, but there are some families or ex-sailors who ask to meet a sailor,' he said.
The USS Peleliu, a 38,000-ton amphibious assault ship, brought 2,500 U.S. Marines and sailors from a four-month Pacific tour and the USS Duncan, a 3,500-ton frigate with 163 sailors, and the HMCS Restigouche, a 2,800-ton destroyer escort with 220 Canadian sailors, arrived from a joint exercise in the Aleutian Islands. 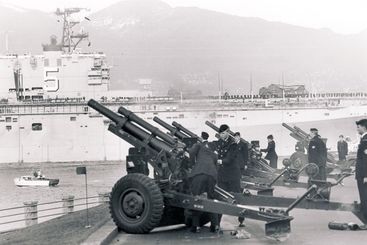