VANCOUVER GUNNERS
From Vimy to Juno 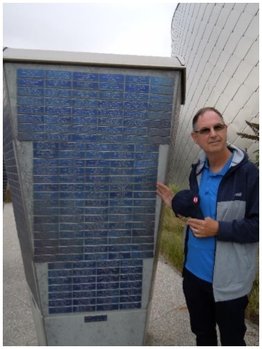 Don Foster
On September 27 2016, Ralph Webb walked the beach where his father, Lt Col Roland H Webb DSO, Commanding Officer of the 12th Field Regiment RCA, landed on D-Day, June 6, 1944.  This was Ralph's first visit to Juno Beach and The Juno Beach Centre, Canada’s Second World War museum and cultural centre located in Normandy, France. The Centre pays homage to the 45,000 Canadians who lost their lives during the War, of which 5,500 were killed during the Battle of Normandy and 359 on D-Day.  The Centre was opened in 2003 by veterans and volunteers with a vision to create a permanent memorial to all Canadians who served during the Second World War.  Its mandate is to preserve this legacy for future generations through education and remembrance.
Ralph Webb’s first visit to Juno Beach Centre,  standing beside the Kiosk where his father has a plaque.
I first met Ralph at the Officers’ Mess of the 15th Field Artillery Regiment RCA at Bessborough Armoury in Vancouver.  We were introduced as fellow “sons of gunners” but as soon as I found out Ralph’s father had been the Commanding Officer of my father's Regiment; a special bond was quick to follow.  Ralph shared with me that he always planned to visit Juno Beach someday to see the famous beach where the Canadians breached the vaunted Atlantic wall.  Well, it just happened that I was planning a trip to Vimy and The Juno Beach Centre with a group of close friends the following year and he signed up on the spot.  Ralph was a welcome addition to our tour and quickly distinguished himself as group photographer.
It is difficult to describe the emotion that I saw on the faces of our group of eight Canadians when they exited the video “They walk with you” at the Juno Beach Centre, but it was the first time I had seen many of my friends with a tear in their eye. When you appreciate the great sacrifice and sense of responsibility these men shared on that beach 72 years ago, it is no wonder so many Canadians have put visiting Juno Beach high on their bucket list.
On Dec. 16 2016 the ‘From Vimy to Juno’ Travelling Exhibit will be on display for a special reception at the Seaforth Highlanders of Canada newly renovated armoury on Burrard Street in Vancouver.  The ‘From Vimy to Juno’ Travelling Exhibit provides an opportunity for Canadians of all ages to learn about Canada’s role in the First and Second World Wars. It draws parallels between the two wars and examines Canada as a nation from 1914 to 1945. This exhibit was developed by the Juno Beach Centre in partnership with the Vimy Foundation, made possible through the generous support of the Department of Canadian Heritage.
I encourage you to register for this special reception and start making your own plans for visiting both Vimy and the Juno Beach Centre in France.
Back to 2016