VANCOUVER GUNNERS
Welcome to Yorke Island
Yorke Island lies approximately 150 miles northwest of Vancouver in Johnstone Strait. In September 1937, the Department of National Defence reserved the right to use the island for military purposes. By the end of the year, construction of the fort was underway. The Department of National Defence, however, paid little attention to the fort in the year leading up to the Second World War, their efforts being concentrated on the East Coast where there was a greater threat of German attack.
The Yorke Island Fort was originally built as a World War II coastal gun battery with two 4.7-Inch Quick Firing Mark IV "B" Guns on Mark III Garrison Carriages. These were replaced later in the war with two 6-Inch Breech Loading Mark VII Guns on Mark II(L) Garrison Mountings. A six pounder Hotchkiss was used as an examination gun, firing bring to rounds for boats that failed to properly identify themselves.
Yorke Island was surrounded by barbed wire and three 60” coast defence searchlights were mounted in concrete emplacements. Anti-aircraft defence consisted of 40 mm Bofors and machine guns.
The Yorke Island Fort was garrisoned by the 85th Heavy Battery, 15th (Vancouver) Coast Brigade, RCA. A Non-Permanent Army Militia unit, it was mobilized on 25 August 1939, 15 days before Canada declared war on Germany, to man the still incomplete installation.  The Fort grew to include support buildings which included messing and recreation facilities for some 300 officers and men. Personnel were regularly rotated with those in Stanley Park and Point Grey. 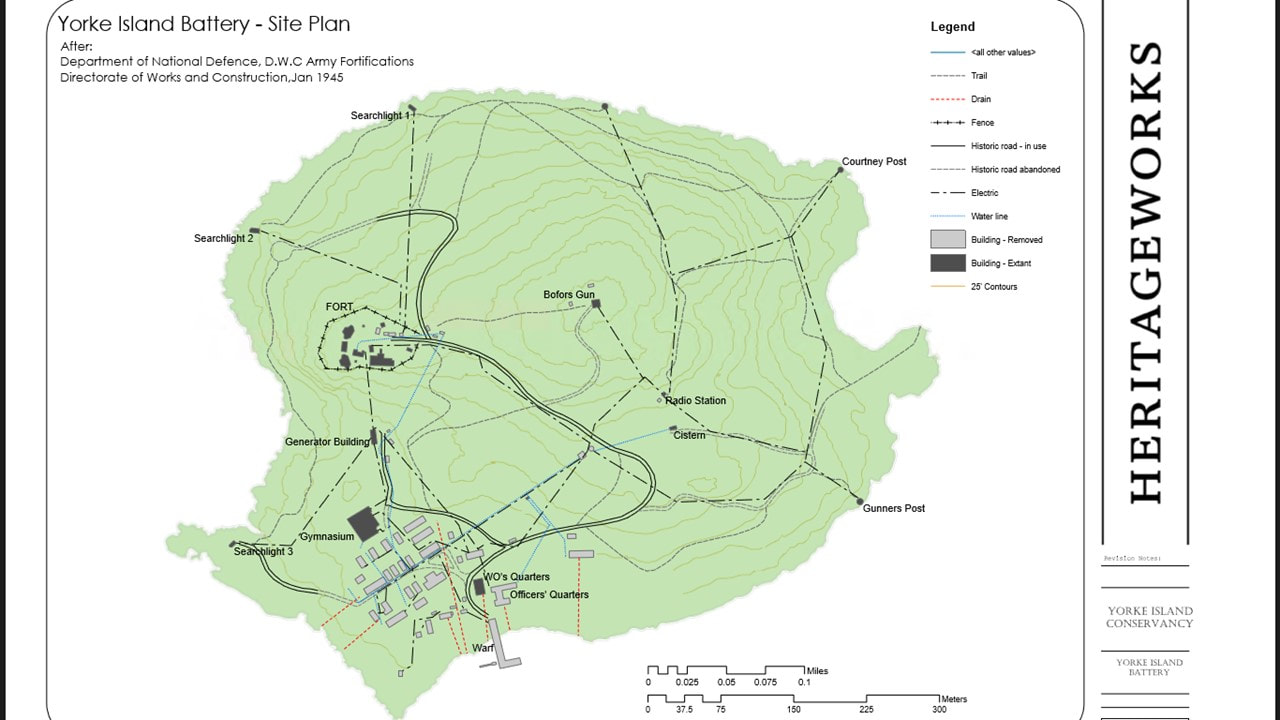 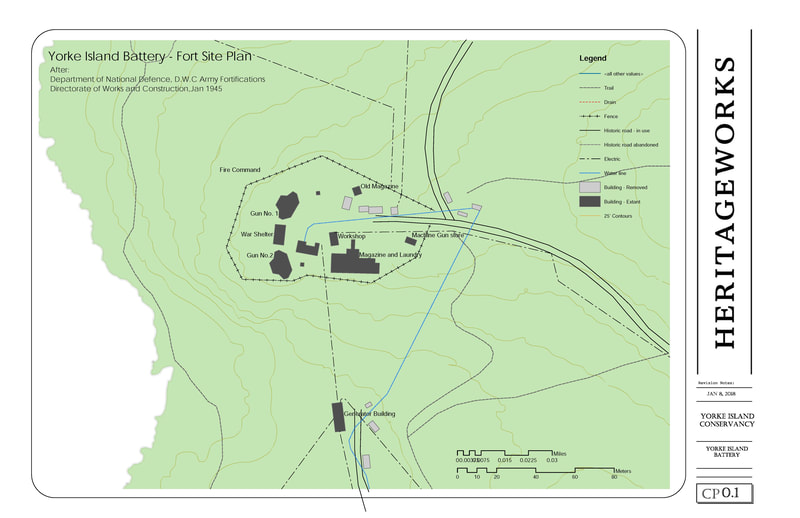 The Vancouver Artillery Association (VAA) and our affiliated Vancouver Island detachment, the 85-VICS, have a formal, volunteer agreement with BC Parks. We are men and women, regular and reserve, serving and retired, that have served in The Royal Regiment of Canada Artillery and their supporters. We have been part of Yorke lsland's military history since the original occupation of the island in 1939. Members of the VAA were already active with the preservation and protection ofthe historical site prior to the creation ofthe Hanlamd'i Mekola/Yorke lsland Conservancy on May 22, 2007.
Some of the work that the VAA members and 85-VICS have accomplished on behalf of BC Parks include:
Collection of stories from the surviving soldiers who served at Yorke lsland;
Documentation/maintenance of structures, trails, historical artefacts, documents  regarding Yorke Island;
70th anniversary celebration held on Yorke lsland in 2009 ;
lnstallation of mouldering toilet facilities in 2012;
75th anniversary celebration held on Yorke Islands in 2014;
Organization & participation in several open house  planning sessions;
Successful CAN/BC 150 Grant resulting in substantial witten assessments, documentation and a BC Parks Heritage Handbook.

The Vancouver Artillery Association continues to support BC Parks in the ongong work on Yorke. Would you like to be part of the team? Contact Leon Jensen  president.vcrgunners@gmail.com
Yorke Island Main Page
Copyright © 2015, 2016, 2017, 2018, 2019, 2020, 2021
Webmaster/editor - Leon Jensen, OMM, CD, Commanding Officer 1998-2001, Regimental Sergeant Major 1986-1988
Additional photos and stories as well as comments regarding errors and omissions would be greatly appreciated. ​
​Have I inadvertently placed personal information of yours on line that you don't approve of?
​Please accept my apologies and contact me at president.vcrgunners@gmail.com and I’ll have it removed.